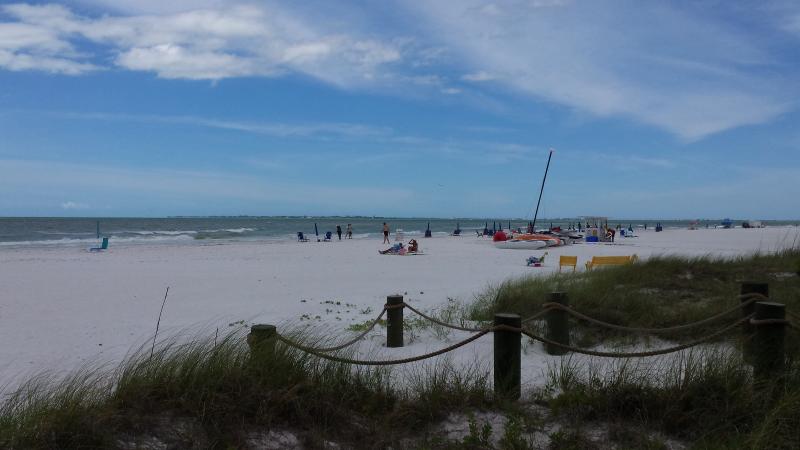 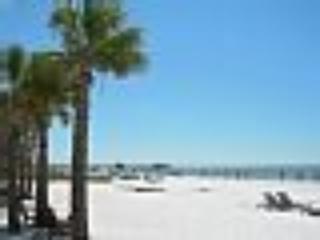 This is a great and comfortable apartment and location. It is at the end of the canal shown in the picture so fishing wasn't optimal. However, we saw a dolphin looking for some food the last night we were there.
However, this could have been the perfect vacation if we would have had a more fair treatment from the property manager. When we arrived at 4pm (as stated in the announcement), the unit wasn't ready, because the people before us left late. This was ok with us so we went out for an hour and a half walk. When we returned, the unit was clean, but noticed it didn't have a rug to clean our feet before going in, so we were constantly sweeping the unit to keep it clean and free of sand.
When we went fishing (property dock) we noticed this "no fishing... from dock only" sign and really didn't know what they meant... so my family started fishing because other neighboring units were fishing as well. The manager came out and said that we couldn't fish from the dock because a previous guest decided to fish and cut the fish on the newly installed deck and then proceeded to tell us how much he paid for it. The problem could have been solved by adding a cutting table instead of banning fishing from the dock altogether.
The one day we decided to do laundry, I was watching it but I can't be everywhere all the time. So after checking my clothes, 10 minutes after the manager shows up and asks: "who's doing laundry" which I responded, I was. he continued to mention it was ready. I said, ok... I just checked the machine 10 minutes ago. he then mumbled: "yeah, that was 10 minutes ago" There was nobody else doing laundry... so that kind of irritated me.
while in the laundry I asked for an extra hour and a half, since i had the unit later and I did pay for a full stay. he said no because the other people were coming in on time. Ok, check out is at 10am, I was asking for an hour and a half... Check in is between 4 and 5... So, what was the big deal? I don't know. I looked at him and agreed, since he was not the owner of the unit. I proceeded to send an e-mail to the owner but she didn't respond. So, we left by 9am the next day. I thought this was really unfair. So, needless to say I will not be staying there again.
Like I said, it's a great location, but I think the management could do much better.
My suggestion would be to hire a cleaning crew for speedy service, add a cutting table at the dock, and add a few outdoor or indoor rugs to clean feet...
Nothing much to add, but desperately needed to improve customer satisfaction, which is crucial to any business :)

Date of stay: July 2015
Liked best: Location
Liked least: Management
Traveling group: Extended Family
Would you recommend this hotel to a friend?   No.
Was this review helpful? Yes
This review is the subjective opinion of a TripAdvisor member and not of TripAdvisor LLC.
I apologize for our property manager's behavior. Tom must have had a bad day as he is usually very accommodating and our renters have very positive things to say about him.I did speak with this renter and told her to leave later. I paid our PM extra so she could stay later. The sign on the dock is confusing as it is not grammatically correct. Since buying this condo in 2014, we have been trying to figure out the sign's intent. We have added rugs. That was a great suggestion. I actually had one outside previously but it disappeared. We strive to have our renters have a perfect experience and take comments very seriously. By the way, we paid $30 for her to have a later departure but apparently she left early anyway. Hum mm..PM didn't mention that.
This response is the subjective opinion of the management representative and not of TripAdvisor LLC.
Problem with this review? Thank you. We appreciate your input.

9 helpful votes
“I would stay there again”
Reviewed October 20, 2014 for a stay in October 2014
7
people found this review helpful

Very nice condo and perfect location. The place was clean, quiet, and the location is perfect. It is a short and pretty walk to the downtown square yet far enough away so as not to hear the live music and traffic when trying to rest. The beach is just across the street and the deck in the back is cozy and quiet. And there is a 7-11 convenient store 3 doors down for the basics. Minor complaints - The smell of bug spray was a bit much but got better by day 2 and the laundry room is coin operated machines not in the condo but a separate shared space.

Date of stay: October 2014
Traveling group: Teenagers
Would you recommend this hotel to a friend?   Yes.
Was this review helpful? Yes
This review is the subjective opinion of a TripAdvisor member and not of TripAdvisor LLC.
We are so glad you had a great stay. We hope you will return soon. We love the condo, as well and have enjoyed upgrading it during our own visits.
This response is the subjective opinion of the management representative and not of TripAdvisor LLC.
Problem with this review? Thank you. We appreciate your input.

Date of stay: December 2015
Traveling group: Spouse/Partner
Would you recommend this hotel to a friend?   Yes.
Was this review helpful? Yes
This review is the subjective opinion of a TripAdvisor member and not of TripAdvisor LLC.
Problem with this review? Thank you. We appreciate your input.
Previous Next
1 2
Updating list...
Do you own a vacation rental? List it here.

Looking for a place to stay in Fort Myers Beach?
View all 1,005 vacation rentals