$154
$111
View deal
Free cancellation until 10/28/21
Hotels.com$154
Priceline$118
eDreams$154
View all 17 deals
Prices are the average nightly price provided by our partners and may not include all taxes and fees. Taxes and fees that are shown are estimates only. Please see our partners for more details.
sue w
Chico, CA
5021

I picked this Inn because they accept dogs and it is in a great location. For those who know Solvang in is one street over behind the "Christmas Store ( Jules Haus ??). The gardens are lovely. It is a great place to relax after a day dodging people taking pictures everywhere. My room is 31 and it is perfect for me and my dog, Rocco. Dogs can be left crated in the room as long as they don't disturb others.

Room tip: I always request first floor for easy access for my 14 year old dog.
See all 1,400 reviews
Nearby Hotels 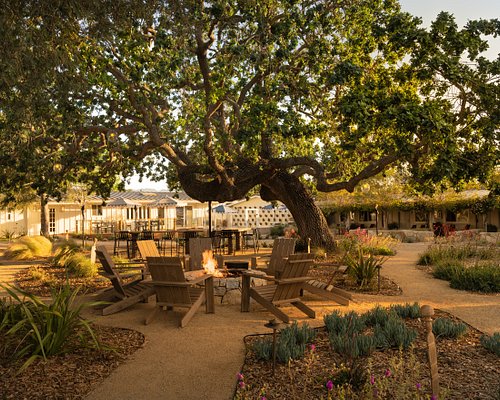 So maybe this hotel feels they have the market cornered. Our initial communication was with Kent, charming & friendly. We pre-registered, they took our bags, we went for a walk to wait for our room. We returned to check in to a very surly gentleman who was singularly unfriendly, come on, not even a smile? We were directed to our ‘chateau loft’, complete with awful brown soft furnishings throughout, a nasty little bathroom with some weird gloopy brown ‘matter’ stuck behind the door - how can that possibly go un-noticed?? I just couldn’t be bothered making a fuss as they seemed pretty unhappy & unapproachable in reception most of the time, it didn’t feel worth it. Breakfast was passable, we only took advantage of that on our second morning. The cleaners do their best with what they have to work with. My daughter slept on the pull-out bed - in addition to that there were 4 tables (yes, FOUR) & no chairs in the entire loft room, so you had to sit on the bed upstairs or the pulled-out sofa bed. If you’d like to pay over $500 for 2 nights in this dingy hotel then go for it - but hey - you have read this review so you don’t have to! Maybe the cottages are nicer, I don’t know. I guess I thought paying $250 a night was enough to guarantee a nice room. Please do more research & choose somewhere else. I feel ripped off, disappointed & angry. This place needs full renovation & re-decoration, please don’t waste your money. Oh and someone rattled our door handle for some reason early evening, and at 4am there was someone standing right outside our emergency exit door, they moved on quickly but I’m afraid it just added to the dinginess of it all. When we arrived back one night at 9pm, there was no parking spaces left. NONE of our stay was a good experience. Don’t do it.

This review is the subjective opinion of a Tripadvisor member and not of TripAdvisor LLC.
Anonymous855
Trabuco Canyon, California
1352523
Reviewed December 12, 2018
Good location, easy parking...need some maintenance

Room was clean and newly painted but otherwise falling apart. Bed was acceptable but breakfast was poor unless you want to gorge on Danish pastry...that was good. Grounds were not quite as shown in photos but there were plenty of outdoor seats, indoor area near "fireplace" also badly beat up. It was close to everything we needed so we walked but I wouldn't chose here again, sorry. Staff also misinformed us about an event that wasn't happening...be careful of that.

This review is the subjective opinion of a Tripadvisor member and not of TripAdvisor LLC.
Lerrac
Irvine, California
33
Reviewed November 26, 2018 via mobile
Location, pet friendly and free breakfast/parking; that’s itl

Amazing location, you can pretty much walk to all Solvang attractions. It is really pet friendly (for a reasonable fee) and it has a great complimentary breakfast (although without diversity; everyday same options are served) and free parking. But that’s all about the hotel.

The rooms are extremely dated. In my room, the old small LED TV didn’t have a working remote control, the electric fireplace didn’t heat, painting was fading off, the air-conditioning was a very old and noisy model, and the walls paper-thin: I could clearly hear a couple next door fighting and discussing for 5 hours in a row and children running in the room above mine. Not to mention the room didn’t have windows you could open, which means no fresh air.

Good morning I am sorry your stay was less than what you had expected. In future stays please let front desk agent know that the room is less than satisfactory and we will try to accommodate as best as we can into a better fit for you.
As far as the rooms being outdated, we are in the middle or remodeling all our guest rooms. We here at WVI want our guest to have a great stay, please accept our apologies and a free upgrade at your next stay. Just contact the agents directly and mention it to them. Our property should be finished by the end of March 2019.
I do hope you give our property another chance.
Have a wonderful day and Happy New Year.

Report response as inappropriateThank you. We appreciate your input.
This response is the subjective opinion of the management representative and not of TripAdvisor LLC.
rschmitt73
Rochester, Minnesota
16277
Reviewed November 15, 2018 via mobile
Disappointing

We booked 2 rooms for a single night stay and the 2 adjoining rooms couldn't have been any more different. Our room was large, but the floor was covered in a fake wood laminate that felt spongy under foot. The walls were painted bright yellow and were covered in dark, dirty scuff marks, especially by the door. The swinging lock latch had been ripped out of the door at some point and was very poorly patched/repaired. It looked like a cheap fix. There was a light switch by the doorway that didn't turn anything on. We had to walk across the room to find a lamp to turn on to see. Fortunately the auto-closing mechanism on the door didn't work, so we could still see by the light coming from the parking lot. Yeah. The room was cold, so we turned the only heat source for the room on. It was a small wall unit that blew a large blast of air directly at the bed. No matter how you positioned the fine to try to divert the airflow. The largest problem with this unit was that it ran terribly loud and would turn on and run for 45-50 seconds then shut off. Then it would be off for 20-30 seconds (and yes, I did time these functions) then very loudly rumble to a start and the cycle would repeat...all night long! I finally got up at 3am and just unplugged it, because I couldn't get it to turn off. The second room we had was much smaller. Not small, just smaller. It also had central heating that ran almost without making any noise at all. The light switch by the door did actually turn on a light overhead so you could see immediately upon entering. The bed slept pretty well, the grout in the tile in the shower was dirty, and the toilet was the smallest, lowest bowl I've ever had to sit on. They did have a nice breakfast, featuring the usual toasted breads, cereal, etc. As well as eggs, sausage patties and has brown patties. When I went to check out, I was going to mention the issues I found in the room, but she didn't want to talk much about it when I first asked about the light switch to nowhere, so I didn't press the issue further. The title sums it up...all in all, disappointed!

This review is the subjective opinion of a Tripadvisor member and not of TripAdvisor LLC.
Rob G
Clifton, Bristol, United Kingdom
154
Reviewed November 7, 2018
We had a fun, relaxing time but the place could do with a lick of paint

We were put in a room round the back which opened onto the car park which was a bit annoying because we could tell some of the other rooms were nicer, and some had been refurbished but the bed was comfy and the room was clean. The heating/AC unit was a bit noisy. The former owner/manager ran the wine and cheese bar in the evenings and we enjoyed talking to him and sampling the wines. The breakfast facilities were a bit shoddy but the danish pastries made up for it. We found Solvang to be a charming town surrounded by wonderful vineyards and this a very central base to explore it for a few days.

Room tip: The cottages seem a good bet, or maybe the rooms on the upper level around the clocktower, or in the westside annexe.
Ask Rob G about Wine Valley Inn & Cottages
Thank Rob G