Residence Inn Salinas Monterey
Residence Inn Salinas Monterey
Lowest prices for your stay
Lock in the lowest price from these sites
$159
Free cancellation until 12/17/21
View deal
Expedia.com$159
Residence Inn$159
Priceline$159
Hotels.com$159
FindHotel$159
eDreams$159
View all 17 deals
Prices are the average nightly price provided by our partners and may not include all taxes and fees. Taxes and fees that are shown are estimates only. Please see our partners for more details.
Jeff K
Citrus Heights, California
8321

Room was very clean, comfortable and well maintained.
Staff was friendly and kitchenette was an added plus with microwave, fridge, coffee maker, dishwasher etc.
Shower was hot and bed was soft.
Same rate as other Marriott right across the parking lot but this one has free breakfast and the kitchen.More

Show less
Room tip: We stayed in room #121. No complaints all.

Thank you for sharing your experience at the Residence Inn Salinas Monterey through the Trip Advisor Survey.

With a mission to provide superior customer service, we take great pride in serving your needs and are delighted to hear that we have met your expectations. Your feedback will be shared with the team to continue to inspire and motivate them to deliver exceptional customer service.

Thank you for staying at the Residence Inn Salinas Monterey and we hope you choose to stay with us again whenever your travel needs bring you back to Salinas.

Report response as inappropriateThank you. We appreciate your input.
This response is the subjective opinion of the management representative and not of TripAdvisor LLC.
See all 288 reviews
Nearby Hotels 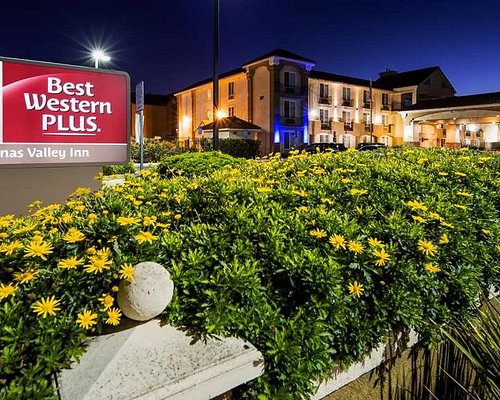 I spent two nights in this Hotel to know the region of Carmel .Its a good option cause you ride some miles in the highway and reach one of the most agreables cities I´ve ever seen that is Carmel!Hotels and Inns are very expensive in Carmel so I think looks smart to stay in Salinas and visit Monterey and Carmel by car.

Thank you for taking the time to write a review of how your stay was with us at the Salinas Residence Inn. We are delighted to see you enjoyed your stay with us and took advantage to explore the surrounding cities near us. Thank you for choosing Marriott as your place to stay when you travel. We hope to see you again soon!

Report response as inappropriateThank you. We appreciate your input.
This response is the subjective opinion of the management representative and not of TripAdvisor LLC.
309kayw
Angelus Oaks, California
13747
Reviewed September 29, 2016
When my husband booked it I was not excited.

OK when it says "residence" I think trashed by families or homeless...sorry - I feel bad just saying that. But this place was great. It was clean, well appointed, cheerful, bed was comfortable and everything worked. There was a sign on the refrigerator "if you need stocking up leave a grocery list with the front desk and we will do your shopping and add it to your bill". We did not need this service but ... It also said a hot breakfast and it was continental but that is OK with us. If I needed to stay for a few days business or such I would certainly put this at the top of my list.

Room tip: Ask for the second floor..the first is one of those on a slant on land and may make you feel as if you are in the basement...it does me.
Ask 309kayw about Residence Inn Salinas Monterey
Thank 309kayw

We appreciate your feedback and are delighted to hear that you had a great stay. With a spirit to serve, we take great pride in not only meeting, but exceeding your expectations. We are thrilled to see you enjoyed staying here at the Salinas Residence Inn!

Your feedback is integral to our ability to continue to improve our service. Thank you again for your time and come visit us again soon!

Report response as inappropriateThank you. We appreciate your input.
This response is the subjective opinion of the management representative and not of TripAdvisor LLC.
A6390MPmicheleb
Northbrook, Illinois
3327
Reviewed September 12, 2016 via mobile
Disappointed

Hotel people were great, but the hotel needs a lot of TLC. Very tired looking rooms, stained carpets in room and hallways. Shower liner and curtain icky. Stained bedspread. Hotel is pet friendly which is great for pet owners, but not so great for people that are allergic. We had a four legged guest in the room next to us, and although it wasn't noisy, it did cause me some discomfort when I walked down the hallway and when I entered our room. Very disappointed with this experience, as we're big Residence Inn fans. Too many other choices in the area. Skip this one.

This review is the subjective opinion of a Tripadvisor member and not of TripAdvisor LLC.
bristolbristol
bristol, UK
2929
Reviewed September 3, 2016
Nice Residence Inn near to Monteray / outskirts of Salinas

Overall very good, however the check inn staff left a poor initial impression were poor. We checked in just as one shift was finishing ( 3pm) and it was evident that the lady wanted to leave.

Room was very nice.
Location quite but quite a few places to eat near by.

This review is the subjective opinion of a Tripadvisor member and not of TripAdvisor LLC.
joshua_sam
Los Angeles, California
813
Reviewed August 23, 2016 via mobile
Beware! Lacking customer service!

I will give 0 for customer service. On Aug 5, I was booked for one night. We drove all day long from LA and about 3 miles away from the hotel ( after about 10 hrs or so of driving) I got an email from them that there is a problem with the booking and asked me to call. I called right away only to be told that we don't have the reservation for the night, that somehow the system allowed me to book even if the hotel was already fully booked. I told the manager, Kim that I was already almost there so she told me to come over anyways and we'll figure something out. We got there and she offered to place me to a different hotel and since it was Marriott's error, they will pick up the tab. I agreed to go to the nearest Hotel that they arranged which was the Best Western Plus in Salinas. We got there and the receptionist told me that she hasn't received the credit card authorization from the manager. Me and my family with our young children were already very tired and this was already about 9:00 pm and so I agreed to her suggestion they I just use my Credit card so I could get into the room but assured me that once the Marriott card goes through, she will switch the information. That same night before I slept I called the front desk to inquire and she told me that everything was already taken care of and they did get the credit card from Marriott. Imagine my surprise when the next day, the same transaction was posted in my account! I had already checked out at this point. I called and spoke to the Best Western Manager and was told that they received the credit card info the night prior but was declined so they didn't have a choice but to bill me. He directed me to contact Marriott Salinas as they cannot do anything for me at this point. I called Marriott and asked to speak to the Manager or whoever but got no call back. I emailed, nothing.. What kind of customer service is that? The manager left us in the air with an empty promise. I didn't ask for a free accommodation that night, she offered. I thought that was a nice gesture since I am a rewards member. It is disappointing that she offered but did not make good with the promise. It seems to me that she just told me that to get rid of me and my family that night. I will never book in this hotel again. I love Marriott but this place is no good. At least, no word of honor from management. It's been almost 3 weeks and so far I haven't had an answer yet as to what happened that night.