momma kiwi will take care of you - Kiwi Orchid Guesthouse

momma kiwi will take care of you

This guest house is right by the bus station which is a plus. The rooms are very basic and not in the best shape but they are comfy. There's nothing too fancy about this guest house but lets face it, you're in ranong thailand and chances are you're only here for a few days to take care of a border run.
What makes this place exceptional is mama kiwi! I have never felt so "taken care of" in any backpacker or guesthouse in my life. She took us to the river and had a friend of hers bring us to the border for our visa run. After that she bought us a bunch of fresh fruit and cooked us food and hung out with us all throughout our stay, day and night. AMAZING FOOD by the way. One of the most genuine and friendly people if have met on my trip. We were even invited to a benefit concert with her that was being held at the local school.
If you enjoy a dip into the local culture and want someone friendly helpful and trustworthy to show you around this is your spot!More 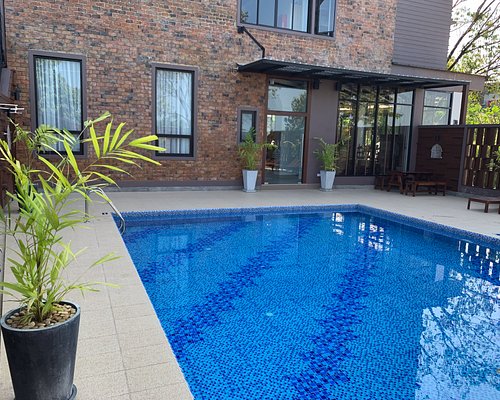 Stopped one night on the way to Koh Phayam. Basic B300 room, shared bathroom - adequate for one night. VG vegatarian food (several curries) and the warm host, Jai, goes the extra mile for visitors with information and help (vg English).

This review is the subjective opinion of a Tripadvisor member and not of TripAdvisor LLC.
quotas
Amsterdam, The Netherlands
184184
Reviewed October 18, 2012
Run down but just ok for 1 night

Roomrate for 1 double fan room was 250 tb. extra bed 100 tb. Bigger room 300 tb.
A run down place near the bus terminal. Rooms are vapoury and smelly with fan. Not enough ventilation. Only window came out on the hall. Shared bathrooms which are not that clean or just very old. Doors can not be locked if you take a shower or a pee. No towels provided. Everything screams for a lick of paint and some restoration work. Restaurant is ok but a mess realy. Lots and lots of stuff which make it a strange place.
It is just ok to sleep for 1 night to get your boat to 1 of the islands the next day.
The location near both busterminals is good.
free wifi in the restaurant.
We went to Koh Payam. We knew the boat fee was 15o but the owner of kiwi makes sure that it was 12 km and sometimes you need a motor to bring you the last part so 100 tb for each person should be a bargain. Thats bulls.... and a complete rip off. The boat is just on a pier and it is maybe 6 to km. 100 tb is a good price for a taxi to bring you there. So the owner just want some quick money from her guests. If she rip you off with this she will prob do it also with other things.

This review is the subjective opinion of a Tripadvisor member and not of TripAdvisor LLC.
Mario T
Zurich, Switzerland
411
Reviewed September 5, 2012
Excelent stay for budget-travelers

After a stay on the close-by island, Kho Phayam, i went to the Kiwi-Orchid as a cheap stopover right at the busstation, before continueing to Khao Sok. Yet the very friendly family who operate this guesthouse and the charismatic city Ranong with its beatiful surroundings made of the planned stopover a stay of several days.

For me as budget-traveler who also wanted to get an idea about the lifes of the local people the Kiwi-Orchid was a real lucky strike. The simple but clean rooms were equipped with a thick, comfortable mattress and fresh bethclothes, vent, little table and chair and access to a quick wireless network. The rooms have only windows to the floor and no TV and are thus merely sleeping-rooms, rather than living-rooms. But for 250 Baht only, they are exactly what i looked after. In the cosy restaurant on the ground floor i daily checked out another one of the delicious Thai foods for prices you will find in the far north only. While Jay, the owner of the Kiwi Orchid, was not only able to inform me about the surroundings in detail but also offered me to join her to several events from the local people.

And so, for example, i was part of the dedication of a newly grown Mangrove Forrest or visited people in the northern mountains who were preparing homestays between thick forrests, beautiful plantations and rocky cliffs, which resulted in further contacts and even some lessons into the Thai language - not that i'm speaking fluent Thai now, but the friendly meetings were it worth alone.

So finally i got a lot of entertainment, some adventure and met a lot of nice people, all this for little bucks, and thus a big thank you to Jay, her family and friends, and a recommendation to anyone passing Ranong on their travels.

This review is the subjective opinion of a Tripadvisor member and not of TripAdvisor LLC.
ANDYCHEF
Whangarei, Northland
6978
Reviewed July 31, 2012
Great Food & Host

Due to our travel plans we needed to stay a night in Ranong near the bus station. This place was suggested to us as it is in a sidestreet just next to the bus station....
PROS - we loved Ranong town, it is a really nice real thai (non-touristy) town with a really good vibe, the food at Kiwi Orchid was delicious, the owner/host spoke great English and was one of the most helpful and genuine people we have met in all our thai travels. She went way out of her way to make sure that our travel plans for the next day were well organised. The surrounding area to the guesthouse had nice shops, foodstalls etc, accommodation is cheap.
CONS - the rooms here are basic and a little tatty, no ensuite bathroom, cold showers, area is a little bit noisy due to proximity to bus station.
Overall the PROS far outweighed the CONS for us - we felt comfortable, welcome and cared for.
This is definitely an area of Thailand we will be back to one day.

This review is the subjective opinion of a Tripadvisor member and not of TripAdvisor LLC.
annarpo
Wellington, New Zealand
8296
Reviewed January 26, 2012
Fine for a night

Stayed because of the visa run.

Don't stay here for more than a night! Bring your own $10 bill for the visa run but otherwise ok. 250b/night for a fan double.

This review is the subjective opinion of a Tripadvisor member and not of TripAdvisor LLC.
View more reviews
PreviousNext
1…678…
<script type='text/javascript' cross