Review of Khwai Guest House
Reviewed May 27, 2019 via mobile

We stayed here as the lodge we were due to stay in was full. The camp is at the lower level budget wise but the game drives and guides are top - especially Ninja! We saw a leopard on the morning drive. The rooms are small but clean and the „outside“ shower is decorated with lots of originality. The meals are set menus but were always good and delicious. You eat at a communal table which might not be to everyone‘s liking but it‘s a great way to meet new interesting people. Go on the mokoro trip - it‘s animal and bird viewing from a completely new angle and so very peaceful.More 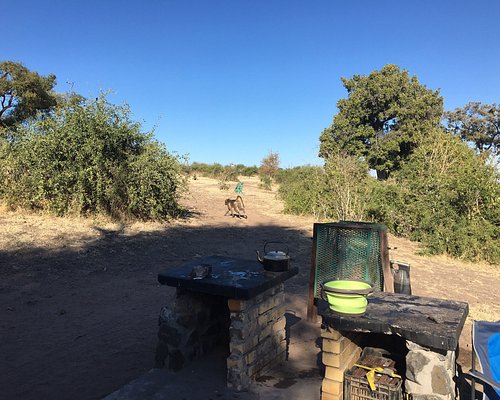 We spent 2 nights in Khwai Guest House during our Safari trip. Jeremy our game driver was great and we enjoyed it a lot. Also the stuff in the hotel is extremely helpful and friendly. We had a problem with internet connection and they helped us to manage it. Drove us to the Khwai village and organised everything in theirs free time.

thank you so much for your nice words. We are pleased to hear that you had such a wonderful stay with us.
We always aim to make our guests happy and we don't mind an extra mile for that.

We hope to maybe welcome you back one day here.
The entire Khwai Guest House team

Report response as inappropriateThank you. We appreciate your input.
This response is the subjective opinion of the management representative and not of TripAdvisor LLC.
Sue T
Wigan, United Kingdom
147
Reviewed November 12, 2018
Botswana Safari

Khwai Guest House was on the edge of the National Park and therefore not as restricted when it comes to rules and regulations. The accommodation was lovely, individual bungalows, well presented. Food was good and fresh. We saw great things whilst out on our drives - wild dogs! Not been seen in three months! Our driver was ecstatic and along with other drivers proceeded to find out what the dogs were up to. Hunting, no less, and we saw the culmination and calling by the dogs to the rest of the pack to share their spoils! Absolutely amazing. Our driver was in communication with his fellow drivers and so was able to receive communication regarding a leopard which had been spotted. So off we went to find it. As we were not actually in the park we could get off-road and up close and personal with a leopard - awesome! Our driver at Kwai was knowledgeable and very accommodating of our wishes. Thoroughly enjoyed our stay here.

thank you so much for your kind words.
We are very happy to hear that you had such an awesome time in the bush with our guide and you enjoyed staying at Khwai Guest House so much. It was really very big luck to find the wild dogs on your game drive.

We hope to maybe welcome you back one day here.
Best regards,
the entire Khwai Guest House

Report response as inappropriateThank you. We appreciate your input.
This response is the subjective opinion of the management representative and not of TripAdvisor LLC.
federico s
Milan, Italy
227125
Reviewed November 10, 2018 via mobile
Positive experience for location and game drive (wonderful).

thank you for taking your time and writing a review here. We really appreciate that.
First of all we are very happy that you had a great time enjoying what our country and the area we are located in have to offer, by the help of our guides and polers.

To hear that your room was not up to the standard that we are usually known for to offer, is something that we definitely will bring to the attention of the management and we apologise for that.

Report response as inappropriateThank you. We appreciate your input.
This response is the subjective opinion of the management representative and not of TripAdvisor LLC.
True2327
London, United Kingdom
3720
Reviewed September 24, 2018 via mobile
Beware of THEFT!!!

Theft of our belonging by house keeping when we were on game drive!

Despite being a frequent traveller, I do not write many reviews unless overwhelmed positively or negatively. This time sadly negatively.
Stayed at Khwai guest house in September 2018. Booking team were very responsive to all queries and we were looking forward to our stay but sadly our stay turned out to be a disappointment. Had the most inconvenient stay of our holiday. Had booked Khwai guest house along with Samgo camp way back in June, requesting for a vegetarian diet.

Game drive: average, as other reviewers mention. The only vehicle they use is old and tired and they will pack it completely with all the guests to maximum capacity. They just go around the same area and don't do much in exploring other areas for top cats or rare animals. Tea break on game drive was very long and we felt this could have been utilised effectively for the game drive. Yet , the guide kept pressing for tips .

Rooms: very basic for the price, clean, Water in the shower just trickles and was just lukewarm. No adaptor for charging. No kettle or tea facilities.

Staff: They employ incompetent non courteous impolite staff. Manager, Mr Ruben, was inconsistently and selectively friendly and at times insensitive. We arrived late in the evening as we were delayed in our private transfer by road to Khwai. We had made a typo error in informing our previous place of stay as chobe river lodge instead of River view lodge, chobe. Hence the management were not able to trace us. We did apologise for any inconvonience this may have caused as we were told they had tried to contact us. But Mr Ruben kept bringing this typo error we had made over and over sarcastically and insensitively in front of the other guest which made us uncomfortable.

Regarding Theft: Mainly beware housekeeping staff steal things . when we left on their morning game drive, we had not requested for making up our room as we were there for only 1 night and were checking out after game drive and going to their other camp. However, as a policy their house keeping went in to our room when we were on game drive anyway and cleaned and conveniently stole a brand new tshirt which was the only item we had left outside our locked suitcase (to change after game drive) . We had cut the price tag of the tshirt the same morning and put that in a bin. We checked our luggage at least thrice thoroughly before we raised a complaint of theft to the higher management mentioning all the above details and left to Sango delayed by 1.5hrs due to the commotion of this theft feeling very upset and paid for the game drive at Sango ( as the manager was busy finding the price tag in the bin and forgot to prompt us to pay for game drive !)
Mr Ruben, in the mean time had ransacked the bin successfully to find the price tag only but not the tshirt and came back saying he would reimburse the price of the tshirt . Also, their higher management sent a letter to Sango around 12 noon saying they take such matters seriously and asked us to provide statement to Police at Sango which Mr Ruben would arrange for and we agreed. However, no Police showed up all through the day and eventually at night on enquiring Mr Ruben, we were blatantly given a lame excuse, that the police were busy with something else and now it is upto us to contact police in Maun. (attached is the higher management letter regarding the above for reference. ). we were all the way appalled at the lack of remorse by the higher management or Mr Rubén for the inconvonience caused to their guests by their staff and they did not bother to even offer us any apology for the inconvonience caused by their staff as probably they thought just refunding $ 39 is sufficient. Only on demanding an apology did Mr Ruben bother to apologise. Their camp managers Mr Ruben and Mr Moses (from Sango ), explanation all through was that, 'never happened before in any of their camps' . Even the letter claims not before in Khwai camp but this seems clearly not the truth as someone else has reviewed Sango Camp ( their other camp) on tripadvisor, also has had a theft experience before and the management response seems very much alike-a non caring defensive attitude and we literally got frowned upon by Mr Ruben for taking up the matter as complaint to higher management and he stopped exchanging pleasantries with us.
For Management to defend falsely that theft has never happened before they need to understand as to why, even If a traveller is making up with any ill will, would they report only an item of just US $ 39 and also inform of the price tag in the bin ( to provide evidence of exact cost) when there were expensive branded handbags and cameras worth more than thousands of dollars ?.

Sure management will come out each time in full defence when matters such as theft are reported and will try proving the reviewers/ travellers in the wrong but they need to understand that It's only a matter of time that such theft reports and bad reviews build up here and show their true worth.

Luckily for us, we only lost a tshirt worth US $39, and had locked all the expensive items and everything else in our suitcase. But please be aware of staying here.
Even places charging less than $100 per night offer better safety and customer service to guests and employ suitable trustworthy staff after proper checks. we are taken aback to having experienced this in a place like this that charge nearly $380 per night for 2 people and employ such non-trustworthy staff leaving their guests vulnerable to theft. Seems like good customer service is not in Managements priority.

Without the above issues of staff, food and minor room issues, this place could have been value for money but sadly it is not. Hence, will not recommend this place.

This review is the subjective opinion of a TripAdvisor member and not of TripAdvisor LLC.
Joan Anton R
Damaraland, Namibia
31
Reviewed August 18, 2018
Great Camp

Khwai Guest House is a fantastic camp near Moremi North Gate. The cottages are new, in perfect conditions. The staff is very kind and all guides are amazing, as Ninja and KB. All game drives are wonderful, specially morning and night game drives. A perfect option to visit Khwai and Moremi. A place to come back soon. Thank you Reuben!

thank you so much for your kind words. We are so delighted to read that you enjoyed your stay here at Khwai Guest House very much.
We will pass your compliments to Ninja, KB and Reuben with pride.

We hope that we will be able to welcome you back here soon. There will always be a room waiting for you ;)

Report response as inappropriateThank you. We appreciate your input.
This response is the subjective opinion of the management representative and not of TripAdvisor LLC.
View more reviews
PreviousNext
123…
<script type='text/javascript' crossorigin='anonymous' async oner