$133
$119
View deal
Priceline$130
Booking.com$123
Hotels.com$119
CheapTickets$119
eDreams$123
Trip.com$133
View all 15 deals
Prices are the average nightly price provided by our partners and may not include all taxes and fees. Taxes and fees that are shown are estimates only. Please see our partners for more details.
2004at
New York City, New York
6

The best thing about this hotel is the location — it’s really nice to spend the night in the Myvatn region, if only to visit the Nature Baths (a 20-minute drive away) in the late evening, after the crowds have left. The views from the big windows are nice, too. Everything else feels practical but impersonal, from the room design to the (hot!) breakfast. It’s probably not worth the $200+ per night they charge in the summer.

See all 644 reviews
Nearby Hotels 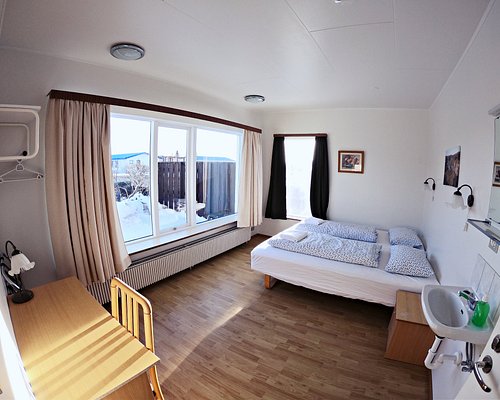 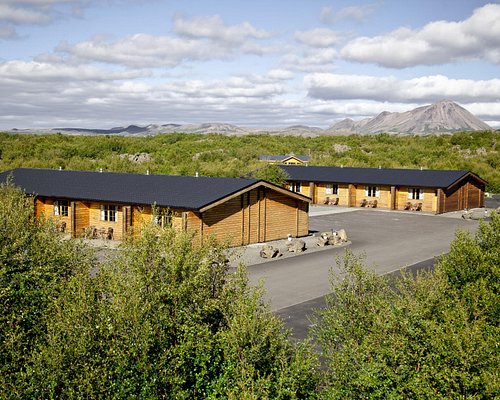 We stopped for lunch. It was clean. Modern and new. Eco friendly. Nice bathrooms. Summer time expect a lot of flies. Food was ok. there are about 4 hotels around the lake. I am not a fan of the modern style. But if you are you would like it. A lot seating areas.

This review is the subjective opinion of a Tripadvisor member and not of TripAdvisor LLC.
Mandy C
Toronto, Ontario, Canada
6545
Reviewed July 17, 2019
Beautiful Hotel in Myvatn

This hotel was exceptionally beautiful both in the views and it's architecture/indoor and outdoor spaces. The breakfast was good. The room was clean and the shower was really nice. I would absolutely love to come back in the winter to see the northen lights here.

This review is the subjective opinion of a Tripadvisor member and not of TripAdvisor LLC.
camval
Cambridge, United Kingdom
384221
Reviewed July 12, 2019
Nice hotel in quiet location

We didn't get here until 11pm at night as we hadn't realised there'd be no other places to stay for one and and a half hours on the Ring Road as we approached from the east. We were grateful for their 24/7 reception desk. We were initially offered a room for 41,000 Icelandic Kroner but that finally came down to 21,255 Icelandic Kroner (£134 UK) to match what I was seeing online. I did wonder why I hadn't just booked it on Booking.com rather than have that discussion at 11pm. Usually a hotel will match or better the Booking.com rate if you walk in and ask for a room as they are then not paying the commission. Also, at 11pm at night they are hardly going to sell it to other people so why ask so much? Anyway, the helpful receptionist from Leeds, UK did sort it out for us.

We had room 7 which was overlooking the car park. The room was very nice, a good size and clean although I found the brushed cotton sheets rather rough.

Breakfast was okay but custard cream and bourbon biscuits? These are very dull and boring British biscuits (cookies) for the non Brits reading this! Also the ubiquitous bottle of cod liver oil we saw in a few hotels. Do Icelanders really use that stuff?! The only hot food (apart from making waffles and toast) was baked beans, scrambled eggs and sausages. None looked that appetising. The waffle maker was good though.

There were a LOT of flies outside the hotel as it's very close to the lake. There were flies all over close to the lake. They are a nuisance but don't seem to bite. Somewhere in size between a house fly and a mosquito. The hotel sell mosquito nets which many tour parties were wearing en masse. They all looked rather odd! We used Avon 'Skin So Soft' which seemed to keep the flies away mostly. Some people swear by this product as an mosquito repellent.

Room tip: Ask to see the room first and for one with a view
Ask camval about Hotel Laxa
Thank camval

This review is the subjective opinion of a Tripadvisor member and not of TripAdvisor LLC.
KyraH60
Sydney, Australia
2234
Reviewed July 6, 2019 via mobile
Lovely hotel

Rooms are minimalist-chic with decent sized bathroom. Great shower, didn’t get overwhelmed by any sulphur smell in the water at all. Comfortable beds and room comes with basic amenities such as kettle, coffee, tea and hairdryer. Had dinner in the restaurant one night of my stay- hands down the best lamb I’ve ever eaten!
Included breakfast is standard Icelandic affair and plenty available. Definitely recommend.

This review is the subjective opinion of a Tripadvisor member and not of TripAdvisor LLC.
HOLLESLEY
Yorkshire, UK
3416
Reviewed June 28, 2019
LOVELY HOTEL IN LOVELY LOCATION

I stayed in a single room, but plenty of space. Simple hotel but very clean and well-kept. Food good too, and service very attentive. Staff also very helpful on Reception. Lovely walk round the pseudo-craters just over the road, but watch out for the midges - they don't bite, but they do get in the way, although luckily they don't get into the hotel rooms.