Perfect stay for all travelers.

This hotel was a sight for sore eyes after a long and harrowing drive through the twisting and turning mountain paths to get to kalambaca from our previous location. The hotel is beautiful both inside and out. The staff is friendly and very knowledgable about the nearby (and breath taking) Meteora. Maps and schedules of all the monasteries are provided upon arrival. Additionally, they hotel offers to loan you a book on the Meteora monastery complex (available in many languages) to better plan your trip. Both to the left and the right of the hotel, by a 3 minute walk, are tavernas with impressive menus and wine lists. More impressive, however, is the view these restaurants provide. The hotel has a bar and a complimentary breakfast, two things all travelers can appreciate! Our room is clean, bright, sizable, with a full bathroom, and an outdoor patio that over looks the mountain. A perfect place to rest your head after climbing the many steps of the monasteries and reflect upon the incredibleness of this area!More

Show less
Room tip: ask for a mountain view road as it is on the other side of the hotel, away from the street and parking lot.
See all 1,437 reviews
Nearby Hotels 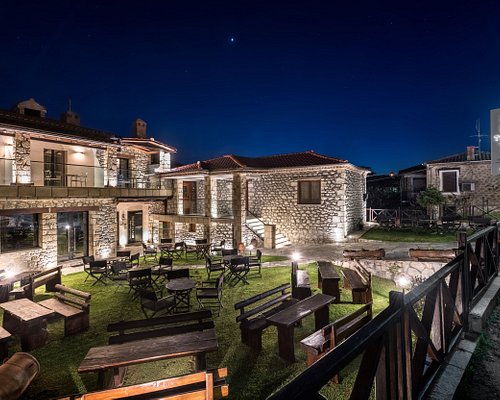 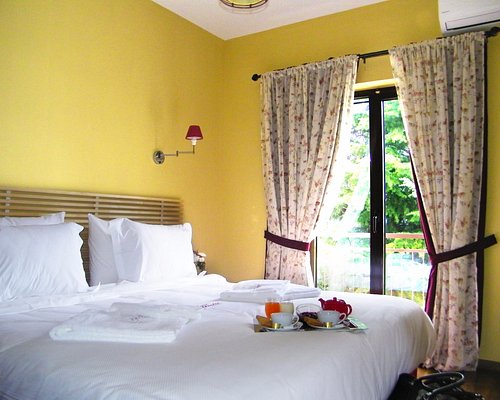 I really enjoyed my experiance at your hotel, and the exceptional personal care that you showed to each guest. The service was of the highest quality, and the location provided me with the means to travel to many central locations. The rooms were of exceptional quality and the breakfast was absolutely the best! Thank you for the rich experiance you provided, and I hope to visit again!

This review is the subjective opinion of a TripAdvisor member and not of TripAdvisor LLC.
talk53
Halifax, Canada
3015
Reviewed September 20, 2011
A Very Special Little Hotel

Arriving in the evening was magical with their impressive accent lighting. It was warm and welcoming from the "get go". We had a room upgrade on the occasion of our anniversary which was a lovely surprise. Breakfast was absolutely the best I had on our 3 week stay in Greece- with fresh yogurt, local honey and home-made preserves. We were having coffee on our balcony watching an elderly gentleman tend his fig trees on the adjacent property. He threw us up a few (delicious!) and during our conversation, told us the Dellas owner was his son. What a charming man. Everyone was just great: friendly, helpful, accommodating and genuine. We wouldn't hesitate a moment to return. Highly recommended.

This review is the subjective opinion of a TripAdvisor member and not of TripAdvisor LLC.
heeto
Halifax,Nova Scotia
206136
Reviewed September 19, 2011
Fantastic breakfast and stay

Comfortable rooms with nice views of Meteora moutains.Short walk from town so away from the noise of restuarants bars and traffic but easy access.
Excellent staff with helpful advice and free maps of area.
Lots of easy free parking.
Breakfast to die for.Everything fresh and homemade.Will never forget those awesome jams made by the owners wife.Thanks!!
Nice bar/restaurant around the corner with great views from its veranda.Forget the name.
Lots of places to eat and drink downtown near the square.
The monasteries are breathtaking.

Room tip: all rooms are nice even garden view rooms because the views of the mountains are not the best from this location.
Ask heeto about Dellas Boutique Hotel
2  Thank heeto

This review is the subjective opinion of a TripAdvisor member and not of TripAdvisor LLC.
Lucia5906
Bologna, Italy
1
Reviewed September 17, 2011
A nice hotel

Our stay at Dellas Hotel was very comfortable and we were really impressed. The staff was very friendly, the breakfast very good and the room very clean. We booked only one night but we decided to stay another one, because the location was amazing.

This review is the subjective opinion of a TripAdvisor member and not of TripAdvisor LLC.
NYCProfessor
New York City, New York
1348
Reviewed September 15, 2011
Location farther from town center but convenient to monasteries; Wonderful people and breakfast

I am giving Dellas Boutique Hotel 5 stars mainly because of the wonderful people and breakfast. However, I do have to caution that the location is a bit farther from the town center but it is very convenient for the monasteries.

My husband and I arrived in Kalambaka (from Athens) in September 2011 on a Wednesday afternoon at the train station. We had to take a taxi (about 10 minutes and 10 euros) from the train station to Dellas, which was actually in Kastrakiou. We checked into our hotel, and spent the afternoon visiting the monasteries. When we returned to the hotel, we did note that there didn't seem to be much around the area, and you find yourself walking on the side of the road (no sidewalks). We had to walk about 10 minutes in the direction (away from town) to get dinner at Taverna Paradiso, and it was a fabulous dinner! The main town Kalambaka was about a 10-15 minute walk in the other direction. Our room had a view of the side of the mountain. One note: the towels were a little bit rough.

The next day, Thursday, we ate breakfast at Dellas and, since there was a taxi strike, had to make the 9:00 am public KETL bus to take us to the monasteries. I had read the previous Trip Advisor reviews about the breakfast, but I was still amazed at the breakfast. I think that was the absolute best breakfast out of all of my time in Greece! The breakfast spread was simply amazing, and the owner was there during the breakfast. I think after you spend the time eating and talking to the people at Dellas, you will really understand why so many people give it a perfect score. I certainly understood this.

After breakfast, we crossed the street from the hotel, and at about 9:15 a.m., the public KETL green bus came, and we flagged the bus down. The cost was 1.60 euros per person. The bus dropped us off at the monasteries about 15 minutes later. Later in the afternoon the KETL bus stopped at the monasteries about 1:30 p.m. to pickup passengers, then made the return trip back to our hotel and then onto Kalambaka. (Just a note that the monasteries have bathrooms, but these are the hole in the floor bathrooms. Bring your own toilet paper.)

After we returned from the monasteries, we had to leave Dellas and get to the train station by 5:00 p.m.. Since there was a taxi strike, we were going to have to walk (dragging our luggage) into town in the hot sun. However, Olympia (who works at the front desk) checked with the owner, who drove us to the train station! That was so wonderful, and it was just a lifesaver for us! Anyone who is that kind certainly deserves a perfect rating!

So overall, what makes this hotel a standout are the wonderful and kind people and the breakfast. But keep in mind that the location of the hotel is about 10-15 minutes walking distance (or 20-25 minutes, depending on if it is hot and you are tired) from the bus station.

This review is the subjective opinion of a TripAdvisor member and not of TripAdvisor LLC.
View more reviews
PreviousNext
1…134135136…240