Just fell in love with the place - Karma Royal Candidasa

Just fell in love with the place

A very peaceful and quiet location. The only noise you hear is that of the waves during high tide.A small and well maintained resort. The staff is helpful and courteous. If possible opt for one bedroom apartment as studio apartment is small. More

Dear Rajeev K
Thank you for your review. We glad to read that you had a good time at Karma Royal Candidasa
We hope to see you again next time

Report response as inappropriateThank you. We appreciate your input.
This response is the subjective opinion of the management representative and not of TripAdvisor LLC.
See all 457 reviews
Nearby Hotels 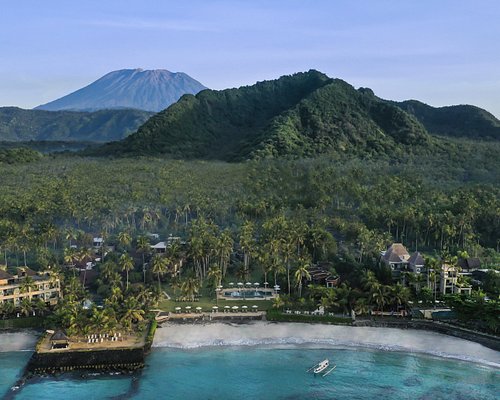 It is located right on the seashore. sea shore is rocky and blackish. the rooms are located on either side of a central landscaped court. at the end of the court is the restaurant and swimming pool giving an excellent view to the sea. sudden drop of the retaining wall make the wave splashes on it and move very high. some times alongwith water pebbles from shore also fall on the pool side making it dangerous to sit during high tide. The room allotted to us was the sea view with nice decor. kitchenette, living space, bed room and the toilet. properly planned and placed the furniture at the right place. the high point is the long and wide sea view balcony. the proximity and the location of the unit make this as the ideal place with music of the waves throughout. It was so relaxing to just pull apart the curtains and laze on the bed or sit on the balcony and just watch the magic of sea. well maintained with good staffs make the resort more inviting to visit again. overall with the location of the unit allotted make me rate this as one of the best experience.

Dear Sateesh N
We appreciated your time to share your experience at Karma Royal Candidasa, thank you.
And we so delighted to read that you had a good time and enjoyed the view and the sound of the wave. Please do not miss Karma Royal Candidasa when you plan next holiday to Bali.

Report response as inappropriateThank you. We appreciate your input.
This response is the subjective opinion of the management representative and not of TripAdvisor LLC.
Paul and Ollie G
Melbourne, Australia
11352
Reviewed June 20, 2019
Beautiful location

We had a week here - very quiet hotel except the amazing sound of the sea. When it say beachfront it really is. We had continental breakfast included - coffee and tea pre made so if you went down later you got billy tea. Also strange that two cooked meals targeted not at westerners are included in the continental but if you wanted eggs you had to pay extra. Amazing place to relax - we also did some lovely walks. The restaurant lets the property down - highlight was the Balinese evening and the get together on the Sunday evening which meant during the week everyone was someone you had met that night which meant friendships were formed. Rooms need an upgrade -however we are conscious that the hotel is remote. The room was clean and serviced each day. Staff were lovely.

Dear Ollie G,
Thank you for the time you spent to share your feedback. We glad to read that you a relaxing time at Karma Royal Candidasa.
Please come back again on your next holiday to Bali.

Report response as inappropriateThank you. We appreciate your input.
This response is the subjective opinion of the management representative and not of TripAdvisor LLC.
82lynw
Adelaide, Australia
3
Reviewed June 5, 2019
Very poor plumbing - Don't stay in apartment 4

Although the staff, location and environment were very good, we were allocated a studio apartment no 4.
Do not stay in that apartment.
From day 1 we had issues with the smell coming from the bathroom. Staff quickly came to try and rectify, by covering the screen vented window with plastic to stop any outside smells coming in. This didn't work as this caused no air flow in the studio at all and the smell was still in the bathroom.
Next they came and put some chemical down the drains. This masked the smell for a few hours
Next time they used bleach, which got rid of the smell, but it was so strong that it made our eyes water when we went into the bathroom and the whole unit smelt of chlorine.
After that they tried burning some oil, which only made a shocking combination of sewerage and frangipani oil. They were unable to fix the problem.
We couldn't fault the staff for trying, however, as there were other rooms available we felt that we should have been offered a different room. It wasn't until the last day that they asked what could be done to compensate for the inconvenience.
We had a studio apartment which had no seating in it at all and no shelving or storage in the bathroom, windows which could not be closed properly and the bathroom designed so that water would go all over the floor when showering, so we couldn't leave a toiletries bag on the floor.
The location was nice, staff very friendly and helpful in regards to activities, the gardens and pool area were nice.
The apartments had DVD players, but no DVD's available to borrow.
The availability of drinking water from the garden was a nice touch, and saved on plastic bottles.
We only had one breakfast on site and that was very well prepared and reasonably priced.
We booked using timeshare and exchanged a one bedroom apartment for this studio. When we asked for an upgrade and there was a room available, the cost was going to be more than many other resorts in the area charged for a night $50 USD per night just to upgrade, plus taxes and charges.
Also this resort charges 21% government tax and service charge, but we noticed other in the area only charged 15%.
As an overall comment, we made the best of the situation, staff tried to fix it, but it was lovely when we booked into a hotel in Kuta for our last day and transit, we both walked into the bathroom and breathed a sigh of relief that it did not smell.

Review collected in partnership with RCI
This business uses tools provided by Tripadvisor (or one of its official Review Collection Partners) to encourage and collect guest reviews, including this one.
Ask 82lynw about Karma Royal Candidasa
Thank 82lynw

Dear 82lyw,
Thank you for your review, and we are very sorry with the smell in room 4, as you stated we had tried many ways to solve the problem, however the smell gone for sometime only. Now we had installed the exhaust fan in the bathroom to get unpleasant smell out of the room. Once again sorry and we hope you will come back again in the future.

Report response as inappropriateThank you. We appreciate your input.
This response is the subjective opinion of the management representative and not of TripAdvisor LLC.
JohnandKerrie
Sydney, Australia
101
Reviewed June 5, 2019
Great position

Recently stayed at Candidasa for the 2nd time. Great position on the beach however, disappointed with the service and the food. Karma resorts are usually excellent but the staff lets this resort down. It is also very isolated and a bus trip from restaurants and shopping which is limited.

Dear JohnandKerrie,
Thank you for your feedback.
We are sorry to hear about your disappointment but please advise us with details to rm.candi@karmagroup.com so that we can evaluate and brief our staff accordingly.
Thank you

Report response as inappropriateThank you. We appreciate your input.
This response is the subjective opinion of the management representative and not of TripAdvisor LLC.
Inna B
St Ives, United Kingdom
154
Reviewed May 15, 2019
Very nice resort and services

Never been to Bali before, we were very impressed with the resort, very clean outside and inside ,every day they clean our room 18,which is the one of the best view to the sea and pool,waves sound is strong and make you sleep well. There is a little fridge and toaster, kettle and 4 sets of cutlery. We dont cook on holiday therefore for us is fine, but if you need microwave, just ask reception, they will help you. We had a wonderful massages in the resort. Mira has strong touch which I like, my huby had massage with sulas, she was more gentle as he asked for light massage, we recommend to stay and have massages here. Weather is great here in may,no raining. You need only cotton and silk clothes. Do fishing trips and blue Laguna trips, Kuta shopping and sunset. Lovely holiday. Thank you all staff Karma Royal Candidasa resort!!
At the resort they do balinees cookering class, $85 per person. We didnt do it ,but we heard a good things about it.
If you go to mountains,you dont need a jumper, only if you go in the night and meet Sun rise therefore I would recomend warm clothes.

Trip type: Traveled as a couple
Ask Inna B about Karma Royal Candidasa
Thank Inna B

Dear Inna B,
We are so delighted to read your review that you had lovely time at Candidasa
Please come back again on your next holiday to Bali

Report response as inappropriateThank you. We appreciate your input.
This response is the subjective opinion of the management representative and not of TripAdvisor LLC.
View more reviews
PreviousNext
1…345…77