Review of The Bund Riverside Hotel
Reviewed October 31, 2012 via mobile

Great location near downtown Shanghai, cleaness and service need substantial improvements. I got a windowless room with stained carpet and wallpaper. The floor was not cleaned. Also the bathroom was not in great shape. The place needs renovation but with good service and cleaness it would at least be acceptable. The five stars have stopped shining long time ago...

See all 737 reviews
Nearby Hotels 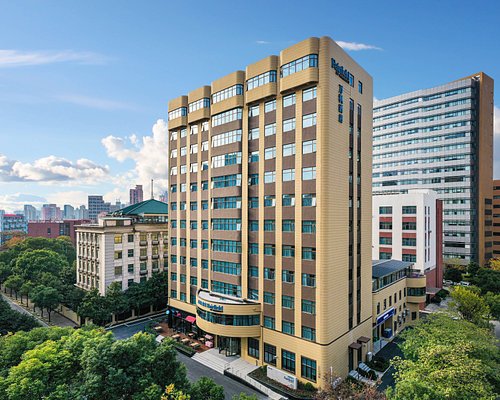 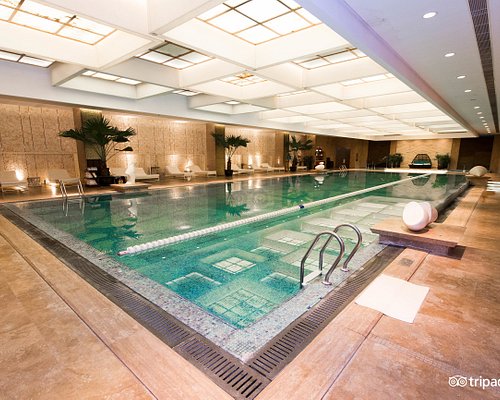 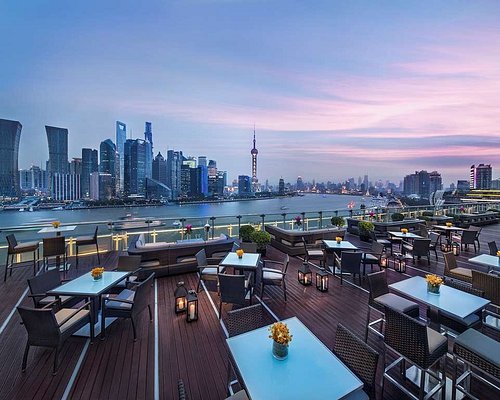 Located near city centre and waterfront, this hotel is well situated. All rooms face a canal, however, hotel rooms on the one side face the River as well which is a few city blocks away near the huge walking shopping mall.

Reception was chaotic because of a woman reception manager who grabbed everyones passports who where checking in bypassing other reception staff who had control of one check-in at a time. The staff were obviously fearful of her and her tactics.

Our room (opposite river-view rooms) was clean, very spacious, larger than river-view rooms. Rooms had a safe, mini bar (with stupidly expensive products), separate tub & shower, window seats and a nice view of the canal and partial city view.

Included in our room (perhaps compliments of our tour company), we were provided 2 bottles of water. You cannot drink water in China.

Breakfast was interesting. I think this hotel is used mostly by tour companies because there were many large tables rather than smaller ones. There are a few tables with city views but the rush is on to get them. The food is quite good with a selection of both chinese and western foods including eggs, noodle soup, cereals, nice bread, etc. There are many wait staff - mostly standing around with nothing to do. The omelet/noodle table only has one cook which is not enough. In the 3 days we were there, we had 2 different egg cooks, both were rude. Jack, refused to make eggs where the egg yolks weren't broken. When we asked for over-easy eggs and not to break the yolk, he huffed, rolled his eyes, walked away from the table cook stand for a minute and put the non-flipped undercooked eggs on my plate. The other cook, punished us for asking for a second soup by letting the noodles boil an extra 10 minutes and made us stand waiting for him to cook eggs for many other tourists before serving us. I guess they don't recognize they are in the hospitality industry. The restaurant is also used for buffet dinners if you arrive late or don't want to venture out.

The bar downstairs would be nice but over-charges so most people don't use it except as a waiting area prior to leaving the hotel. There is free wi-fi in the lobby, which is always a benefit.

The hotel gives competitive rates for changing money. Careful when buying postage stamps as staff charge more than appropriate - our tour guide told us a price, the staff quoted a higher amount and then retracted when challenged by the tour guide.

Generally speaking, I would recommend this hotel for westerners traveling to China.

Room tip: One side of the hotel faces the River, the other side has larger rooms. Both have a view of the canal.
Ask Hosta_La_Vista about The Bund Riverside Hotel
Thank Hosta_La_Vista

This review is the subjective opinion of a Tripadvisor member and not of TripAdvisor LLC.
jjZ1986
Cambridge, Massachusetts
53
Reviewed October 18, 2012
Great value, decent location

Within 2 blocks of the center of Nanjing Road walking street, it was a great value for its location. Its exteriors aren't particularly well-appointed because it's in an older district, but its interiors are quite high quality.

I got upgraded to the executive floor on the 16th, and my window had a gorgeous view of the Pudong skyline at night. Bathroom was all marble, with separate roomlets for tub, shower, and toilet. Corridors on the executive floor was all redwood. Very large and comfortable bed. French windows with marble. Free wifi and broadband.

It's a 10 minute walk from the Nanjing Road East subway station and a little hard to find. Cab drivers in Pudong don't really know the area; I found that only the cabbies who worked Puxi knew the area well enough to find it, so you might have to try several cabs before someone agrees to take you depending on which area of the city you're in. 25-30RMB taxi ride to get to the bar district.

I paid $80/night, and felt like it was a $400/night room back in the U.S., so I'm highly pleased, but make sure you know your roads down pat before getting there the first time because it is a little hard to find.

Oh, and don't drink that sparkling water they put on your bed stand. It's not free and cost 49RMB.

Room tip: City view rooms are actually better because you get to see the Pudong skyline. River view rooms are a bit misleading (as is the overall Hotel name) because it's not the Huangpu river (where the Bund is), but rather the smaller Suzhou river that you'd be overlooking, so it's actually not as good of a view as the city skyline in my opinion.
Ask jjZ1986 about The Bund Riverside Hotel
Thank jjZ1986

This review is the subjective opinion of a Tripadvisor member and not of TripAdvisor LLC.
mike t
london
41
Reviewed October 17, 2012
Nice location

Stayed here a few days while on a tour. More than adequate for the price with glass external elevator on the bund side.

Friends had room with a great view, but to be honest i didn't look out of my window as a hotel is just a place to rest, sleep, shower and sh1t.

Nice and local for shopping and use of metro. Great local space nearby (Tao's Cafe, Dainchi Road). Free wifi throughout.

This review is the subjective opinion of a Tripadvisor member and not of TripAdvisor LLC.
babooshkaphillips
Norwich, United Kingdom
8839
Reviewed October 16, 2012 via mobile
Moving to this hotel saved my trip to Shanghai

Spent one night here , the last stop on a two week trip around China.
Originally booked by tour operator into another hotel it only took ten minutes to decide to change to this hotel and so glad I did.
The Riverside Bund Hotel had helpful staff only too glad to help carry bags up the few steps to reception. Checking in was easy & quick all the staff I met spoke good English.
This really was a four star hotel. I had a twin room on the 15th floor which had all the facilities that I could have needed & a breathtaking view of Shanghai's most famous buildings. A great seating area & bay window made it a pleasure to take it all in - this got even better at 22.00 when a firrwork display started.
The hotel is in a fabulous location near the Bund in quiet streets but only a couple of streets away there are bustling streets with tea-shops , food sellers & alittle further on a modern shopping area full of large international stores.
The glass lift that travelled on the outside of the hotel was another bonus discovery. Breakfast on the 18th floor gave more stunning views & a great choice of western or Chinese food with helpful attentive staff.
I regretted having to move on so quickly but if I should ever return to Shanghai this will be the hotel I book

This review is the subjective opinion of a Tripadvisor member and not of TripAdvisor LLC.
Juleszzznyc
New York City, New York
4531
Reviewed October 9, 2012
Good location but typical tourist hotel

I stayed in The Bund Riverside in mid-September for two nights. When I first checked I was given a room with two twin beds when I originally booked a king. They immediately upgraded me to a king size suite which was very spacious and quite luxurious compared to the standard rooms. I had a great view of the Shanghai skyline and the room had free wi-fi which was a bonus. The staff was very accomodating despite the fact that only a couple of them spoke English. Although breakfast was not included in my room rate, I chose to have breakfast at the hotel anyway. It was a standard buffet with a mixture of Chinese and western food. There was an omelet station but the hotel was so crowded it wasn't worth the wait. Since there were many other options, it wasn't an issue for me. My two complaints with this hotel are 1) The elevators were small and extremely slow and with the hotel at full capacity it took forever to get to the 17th floor, 2) The hotel lobby was not spacious at all and it was always filled with smokers. The location was good within a couple of walking blocks from Nanjing road a major pedestrian shopping street and a short walk further to the Bund. Taxis were cheap and easily accessible. Overall, I had a good time in Shanghai and The Bund Riverside served as a good home base.

Room tip: Try to upgrade to a suite if available.
Ask Juleszzznyc about The Bund Riverside Hotel
Thank Juleszzznyc

This review is the subjective opinion of a Tripadvisor member and not of TripAdvisor LLC.
View more reviews
PreviousNext
1…666768…