FindHotel
Destinia.com
Trip.com
View all 14 deals
Prices are the average nightly price provided by our partners and may not include all taxes and fees. Taxes and fees that are shown are estimates only. Please see our partners for more details.
Salome J
Colombo Sri Lanka
118

Good for a short relaxing stay

We booked a room for a day, and I must say the rooms were very spacious and comfortable, and a beautiful view of the pool, the staff were very helpful and we did not have any issues with them, on our arrival we had room service but it was a bot disappointing cause it took them about 45 mins to bring the food to our room, I ordered a baked crab which was way too salty and had to be sent back, they replaced same after 15 mins but that too was salty and was not appetizing at all.

The buffets were more or less interesting but at first we were dissapointed at the spread but later on realized that they were serving other dishes (BBQ, action stations) a bit towards the far end of the restaurant which cannot be seen, and had nothing to do with the main buffet. no one informed us about it and while we sat down to have our food that we realized there was another area as well.

But I must say hats off to the staff even at the restaurant cause I saw them checking with so many people if it was alright if they cleared the buffet, and that I thought was very rare in any hotel in Sri Lanka.More

Show less
Room tip: Ask for the rooms in the main building over looking the pool

Thank you v much for your comments .so sorry for the delay in the service /room service and the food issue .i have already informed the persons in charge .Hope that you will visit us a gain .
best wishes from the team at the hotel .
General Manager

Report response as inappropriateThank you. We appreciate your input.
This response is the subjective opinion of the management representative and not of TripAdvisor LLC.
See all 1,521 reviews
Nearby Hotels 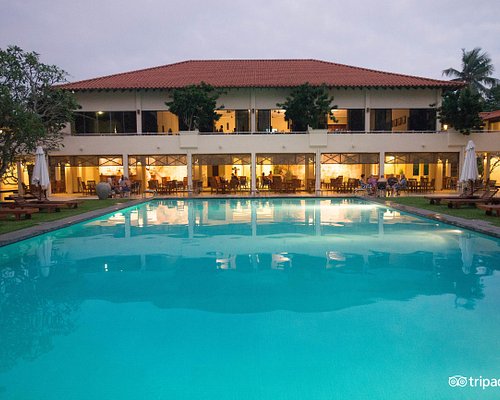 I booked a cabana to stay with my wife for one night. We have received a warm welcome and drinks and early check in as well. The room is spacious and clean but the commode was not in a good condition. The pool is huge and beautiful. There were lot of food varieties. The lunch and the breakfast was really good. But we were very DISSAPOINTED WITH THE DINNER and it was really bad. The staff is reasonably OK. Good for families.

Room tip: Cabana which is away from the pool and in the upper floor.
Ask Haritha T about Turyaa Kalutara
2  Thank Haritha T

Thank you for your lovely comments ./Great to note that you have had a wonderful holoiday .
See you soon .General Manger and his team .

Report response as inappropriateThank you. We appreciate your input.
This response is the subjective opinion of the management representative and not of TripAdvisor LLC.
russell y
Leeds, United Kingdom
24
Reviewed June 13, 2014
Russell Y - Paradise on earth

This place was great, the rooms are spacious and clean, there are generally two buffets to choose from, one is european and the other is Sri Lankan and there is also another kitchen area serving additional dishes...a wide selection overall.
The staff are out of this world in their friendly outgoing welcome, all day, every day, whatever the time, day/night. I can not fault it :-)
Aitken Spence have a chain of holets throughout Sri Lanka and this is one of the older hotels so the others must be quite awesome !

Room tip: All the main hotel rooms have showers only but the CUBANA rooms have a shower over a bath if this is your preference. I was upgraded for free. I guess it depends on how you ask. The best tip is...learn to say thank you, hello, and good day in Sinhala (their language) the staff totally appreciate this and if service can be better (it really couldn't) they will try even harder.
Ask russell y about Turyaa Kalutara
3  Thank russell y

Thank you so much for the lovely comments .See you soon at the sands .Great to hear that you have had a good time .
warm regards .
General Manager and the team .

Report response as inappropriateThank you. We appreciate your input.
This response is the subjective opinion of the management representative and not of TripAdvisor LLC.
Suranjith P
Dehiwala-Mount Lavinia, Sri Lanka
12
Reviewed June 9, 2014
Not worth for price!!!!!!!!

The rooms are very spacious and clean and are kept to a very high standard. The location is beautiful. Great pool & Activities.

Bad food – Food was awful, not many options in the any of 3 buffet meals.

Noted your comments .Will try to improve on the food .
warm regards .
G M and his team

Report response as inappropriateThank you. We appreciate your input.
This response is the subjective opinion of the management representative and not of TripAdvisor LLC.
ifraz s
155
Reviewed June 8, 2014 via mobile
Decent facilities and food was pretty good.

Enjoyed the time spent in Sands with my family. Kids throughly enjoyed and there were something for everyone. Staff pretty friendly. Would recommend to both locals and foreign tourists who are with families without any hesitation.

many thanks for your comments .great to hear that you and your family had a great time .Looking forward to your next visit .
Warm regards .
general manager and his Team

Report response as inappropriateThank you. We appreciate your input.
This response is the subjective opinion of the management representative and not of TripAdvisor LLC.
Sharuka
Ella, Sri Lanka
359
Reviewed June 5, 2014
Awesome place to take a break

It's a very nice property , the welcome is very warm with a lovely smile makes one feel the hospitality from the first touch point , the rooms are nice and clean , with all requirements and a nice view of the sea , the pool is well spread and has entertainment for everyone , many sports to do in your leisure time , food is good but think it could be better , all in all it's a nice property to stay

Dear Sharuka ,
Many thanks for your comments .hope you will tell your friends to visit when time permits .Hope to see you soon .
warmest regards .
General Manager and his team .

Report response as inappropriateThank you. We appreciate your input.
This response is the subjective opinion of the management representative and not of TripAdvisor LLC.
View more reviews
PreviousNext
1…168169170…
<script type='text/j