Not what it was before... - Tharaburi Resort

$48
View deal
Free cancellation until 11/06/21
$49
$44
View deal
Free cancellation until 11/01/21
Reserve now, pay at stay
Hotels.com$49
eDreams$44
CheapTickets$49
View all 9 deals
Prices are the average nightly price provided by our partners and may not include all taxes and fees. Taxes and fees that are shown are estimates only. Please see our partners for more details.
manureva744
Massillon, Ohio
7146

Not what it was before...

On my first visit to the Tharaburi Resort, I had really enjoyed the place, it was nice and peaceful. This is still the case but I would advise this place only for its proximity to the ruins, its main selling point.
One good improvement, the bikes are new and well maintained.

Room tip: Do not waste money booking the Grand Deluxe, the Deluxe rooms are bigger and nicer.
See all 364 reviews
Nearby Hotels 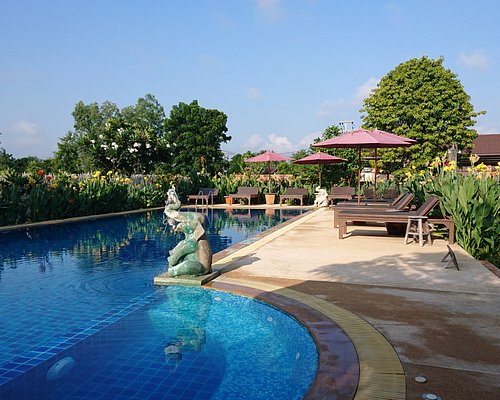 We spent 2 days at the archaeological site of Sukhothai. When planning our visit we were looking for an accommodation closed to the ruins so to be free in our plans. The Tharaburi is in a very good location. Just rent a bike at the hotel (50 thb per day) and ride 7 minutes to the site main entrance. Lots of restaurants, shops for food and drink nearby. We were there during low season, so the hotel was not very busy. The staff is very welcoming and following our request, they offered us their best room available, looking on a nice little pond outside. Room and bathroom were very clean, nicely furnished, in-room safe working properly. Swimming pool could be kept cleaner, considering the low occupancy. Breakfast was average. We had a thai massage in house with very good professionals performing it; overpriced compared with Thailand's average but anyway very good quality.
Private taxi pick-ups working perfectly, but count with European prices. Could improve breakfast service but the hotel is surely recommended for their location-quality value.

This review is the subjective opinion of a Tripadvisor member and not of TripAdvisor LLC.
Quan75
Paris, France
2116
Reviewed August 26, 2012
No maintenance, renovation required and lack of management

We stay 2nights to visit sukhothai( 13-14th August). We chose tharaburi because of TA and were dissapointed of the place. our room needed renovation. stains on the wall, painting scratch on the ceiling. The design should have been nice but poor maintenance put all this like deserted place. the worst is the maintenance. We had issues with shower plug blocked and water flowed in the bathroom. We requested 3 times before a housekeeping lady came!!! we had to show her how to fix it with a screwdriver...
The AirCon was leaking water and spoiled our luggage and guess what? who came? the housekeeping lady who put a towel on our luggage!!!canyou believe that?
there's no handyman in this hotel to fix maintenance issues. housekeeping is left by it self to fix maintenance.
Breakfast : this can't be what thai can provide at its best (processed food, set of yougourt, milk, artificial orange flavour drink) and fried eggs. Come on, where is the manager to make the cook and the handyman doing their job?
The funniest thing is the hotel hired a photograph for the advertisement. I can tell you the pictures hide very well the need of renovation.

This review is the subjective opinion of a Tripadvisor member and not of TripAdvisor LLC.
Berry163
Sydney, Australia
711
Reviewed July 31, 2012
Gorgeous little resort close to ruins

This resort is a great place to stay while visiting sukhothai historical park. Our room was very pretty and comfortable for our 2 night stay. We loved the complimentary bicycles and the service was good and personal, with friendly staff. All meals we ate within the resort were delicious. This resort has a great location being approximately 10mins from the historical park by bicycle.

This review is the subjective opinion of a Tripadvisor member and not of TripAdvisor LLC.
TheBigster
43
Reviewed July 29, 2012 via mobile
High expectations, big disappointment.

Maybe it was the poor weather, maybe it is just us, and for sure it were our high expectations, fueled by their own website and some reviews: but we were very disappointed after our stay of 3 nights. It started on the 1st day; after staying in guest houses without pool, the kids were dying for a swim, but the pool was closed due too cleaning with, as appeared later, an overload of chlorine. With the exception of the manager and one male staff the rest of the crew was unattentive and sloppy. Most of them just hung out in front of the TV in the restaurant. On day 1 there was no sprite (but listed on the menu), no big deal if out of stock for one day, but on day 2,3 and 4 same thing, in spite of the 7-eleven close by. On day 2 no cocktails, as the maker was on leave that day...again no big deal, but for such a pretentious resort a laugh!
Family suite is nice for the parents, but the kids were put in a stuffy attic room without windows. So better to book 2 rooms.
Old Sukhitai is fantastic and the resort within an easy bike ride well located. So with some better management this is potentially a good place to go. But for now it does not deliver value for money.

This review is the subjective opinion of a Tripadvisor member and not of TripAdvisor LLC.
MisterN52
Cambridge, United Kingdom
82107
Reviewed July 26, 2012
Disappointed

We were looking forward to this hotel after reading glowing reports on various web sites. What a disappointment!

The use of the word resort is an exaggeration. It is a small hotel consisting of a number of separate buildings. It was raining when we arrived; there is no protection from the rain at the entrance and when crossing between buildings, worse the floor tiles in some places near the restaurant were slimy and very slippery. No attempt has been made for a long time to clear this; the cleaning staff were oblivious to this hazard. A number of guests slipped and could have injured themselves badly. Even in dry weather these tiles are slippery.

The complex is overgrown with vegetation and contains a number of ponds; consequently expect a high population of mosquitoes.

We had dinner in the restaurant on two occasions; we found the food to be passable, but somewhat expensive. Breakfast was a much poorer affair - big in quantity but not so good on quality.

The rooms are furnished in a rustic style. Consequently, the first room we were given on the street side (we had reserved a grand deluxe room) was a dark affair with dark furnishings and small windows. Worse the rooms was dusty (I hate dust and have an allergy). I suspect that they put us in a cheaper room. After complaining they put us in the suite. Their idea of an extra bed was a mattress on the floor. Granted, the sheets were clean, the aircon worked and we had wifi.

The desk staff were friendly and helpful. The restaurant staff on the other hand were lacking in initiative and struggled to crack a smile.

There is a small pool which we did not use as we were out at the historic sites. You can rent a bike for 50 baht per day. Be advised that this is a heavy-weight one-speed affair.

I think the room rate is expensive for what you get.

The sole advantage of this hotel is its proximity to the old town and the historic park; one can walk there in around 10 - 15 minutes.

Room tip: Go for the suite or the rooms in the same wing as the suite. The rooms on the street side are terrible - dusty, dark and can not use the so-called balcony.
Ask MisterN52 about Tharaburi Resort
Thank MisterN52