$130
$110
View deal
SAVE $20
Free cancellation until 05/14/21
Reserve now, pay at stay
Priceline$130
eDreams$130
Travelocity$110
View all 12 deals
Prices are the average nightly price provided by our partners and may not include all taxes and fees. Taxes and fees that are shown are estimates only. Please see our partners for more details.
Kairho1
Ocala, Florida
823405

Gorgeously beautiful and well maintained.  Actually, it was mostly a joy to spend three nights there, and we will agree with most of the positive reviews here.  Especially the landscaped grounds, unexpected llamas, and the super attentive and friendly staff.

Where they fell down was in the little things.  Wifi was annoyingly intermittent and even though we knew there was no television in the rooms the nearest place one could get some news was a long walk to the other end of the property.

Worse was the complete failure of staff to honor the do not disturb sign duly hung on the outside of the door...several times, including one time (prior to deploying that tag) a chambermaid, without even knocking, insisted on entering in order to put hot water bottles under the bedcovers...she insisted, persisted and succeeded...even though one of us was already in bed!More

Thank you for such appreciation of Cusin's complex property, especially for the attentive staff. The reward of a 'long walk' through landscaped gardens to is the unusual Monasterio.

A recent survey revealed that over 95% of our guests preferred not to have television in their guest room.

I apologize for such an interruption. The sincere chambermaid, new to her job and determined to fulfill her job description, has learned to recognize all door signs.

Report response as inappropriateThank you. We appreciate your input.
This response is the subjective opinion of the management representative and not of TripAdvisor LLC.
See all 662 reviews
Nearby Hotels 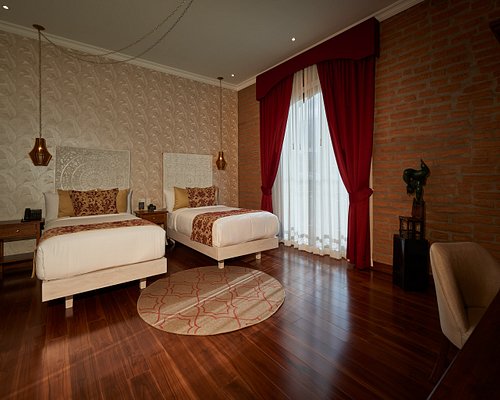 We were put in in room 21, which is on its own immediately adjacent to the main road, and a short distance away from the main block of rooms around reception and the dining room & bar. The room was pleasant, but sleep was ruined around 6am by loud intermittent traffic noise from the road - buses taking workers from Otovalo to the nearby flower factories. When we complained the hotel (to its credit) moved us that day to a more centrally located room which was much quieter, and left us a free bowl of fruit in that room. Generally the experience was pretty good apart from intermittent availability of wifi and reliably hot water.

Cusin apologizes for such unusual inconveniences, especially in such a pleasant room. Thank you for crediting Reception's attempt to solve the situation and for appreciating Cusin's 'quirky' character.

I hope that you had time to explore Cusin's extensive gardens, especially the Monastery.

Report response as inappropriateThank you. We appreciate your input.
This response is the subjective opinion of the management representative and not of TripAdvisor LLC.
tamaraw345
2639
Reviewed February 10, 2019 via mobile
A real treat!

We loved our short stay (2 nights) in this beautifully restored and decorated property. Although this type of accommodation is generally beyond our price range we couldn’t resist the chance to stay at such a beautiful place with so much history.
The people were very nice, and the lady at Reception was particularly helpful.
The food was a bit hit and miss but the breakfast was excellent and the ambiance in the dining room in front of an open fire can’t be beaten.
We enjoyed the gardens, games room and visiting the animals at the stables. Also exploring the monastery and visiting the market at Otavalo.
Loved the fire in our room and the hot water bottles!

La Familia de Cusin is inspired by your lack of resistance and your unexpected and sincere appreciation of the properties and the people who sustain it. Carpe diem defined!

Report response as inappropriateThank you. We appreciate your input.
This response is the subjective opinion of the management representative and not of TripAdvisor LLC.
hillsing
New York City, New York
176
Reviewed February 4, 2019 via mobile
Paradise!

This was our first stop on our first visit to Ecuador. From the moment we arrived, we were welcomed as family. Rooms are stately and decorated with stunning art and antiques. The hacienda is surrounded by sweeping mountain vistas and gardens galore. The restaurant features delightful local cuisine and farm to table vegetables. At night, turn in to the sounds of a crackling fireplace. By day, explore nearby Otavalo, Parque Condor, hiking for all abilities, and horseback rides with views of San Pablo del Lago and the volcanoes. Truly a gem and a slice of heaven; we were sad to leave! Highly recommend and hope to return to visit the lovely people!!

Thank you for such an appreciative review, especially 'stunning art and antiques', food and the surrounding area.

Fulfil your hope, and Cusin's, and return to an ever-changing 'paradise'

Report response as inappropriateThank you. We appreciate your input.
This response is the subjective opinion of the management representative and not of TripAdvisor LLC.
Cathy W
3631
Reviewed February 3, 2019 via mobile
Magical

Hacinda Cusin is a magical place. The cottage room we stayed in was charming and the entire inn was filled with antiques, picturesque gardens and the warmth you might imagine from a 400 year old inn. The food was delicous and the staff attentive and warm. If yoi go to Otavalo- this is where you want to stay.

'Magical' and 'this is where you want to stay'!

Thank you for such an appreciative review - so inspiring for La Familia de Cusin. Regresa pronto!

Report response as inappropriateThank you. We appreciate your input.
This response is the subjective opinion of the management representative and not of TripAdvisor LLC.
Karen P
Montpellier, France
51
Reviewed January 16, 2019
Heavenly Gardens in Ecuador

My husband and I stayed in one of the guest cottages on the Monastery side of Hacienda Cusin for two weeks. It was heaven on earth! To walk thru the gardens of both the Monastery and the Hacienda was a meditation of green delight. Impeccably maintained, this handsome 400-year old Hacienda has retained its original historic charm and allure. Fireplaces in every room (instead of large screen TV's. The service and cuisine in the dining room were excellent. I would highly recommend staying here for at least one week - as there is a lot to see and do in the Otavalo area!

'Heaven on earth'! What an inspiration your review is!

Thank you for such words, evidence of your exploring and appreciating the complexities of not only Hacienda Cusin but of El Monasterio, its staff, gardens, art, cuisine and environment.

Report response as inappropriateThank you. We appreciate your input.
This response is the subjective opinion of the management representative and not of TripAdvisor LLC.
View more reviews
PreviousNext
1…678…111