Wireless internet is the one and only... - Bavaria Sport Hotel

Orbitz.com
Booking.com$60
Hotels.com$60
View all 16 deals
Prices are the average nightly price provided by our partners and may not include all taxes and fees. Taxes and fees that are shown are estimates only. Please see our partners for more details.
farmami2012
Sao Paulo, SP
8390

Think about all your hotel stays and try to remember the last time you experienced the pleasant smell of cleanliness every time you get into the room... Bavaria Sport Hotel is like that. The hotel is nothing but clean, cozy and charming. Located in a residencial zone, it is quiet and friendly in all aspects. Our room (intermediate cathegory) was spacious with king bed and armchair; mattress and pillows of excellent quality; spotless bed and pillow sheets. All interiors are nicely decorated and temperature controlled. There is an internal and an external fireplace, this one located around the heated outdoor pool. Staff is gentle and attentive. You are welcome to bring your own wine bottle and have it anywhere in the hotel, no extra charges. A lot of options for breakfast, prepared with good quality ingredients. Light breakfast option is also served (self-service). The only service which should be improved is the speed of wireless internet. Visited during low season but the hotel looked full, therefore quality of service is great regardless the number of guests. Excellent price, 7 nights for around R$ 350 each. Visited Aug 15 to 22.More

Show less
Trip type: Traveled as a couple
See all 2,511 reviews
Nearby Hotels 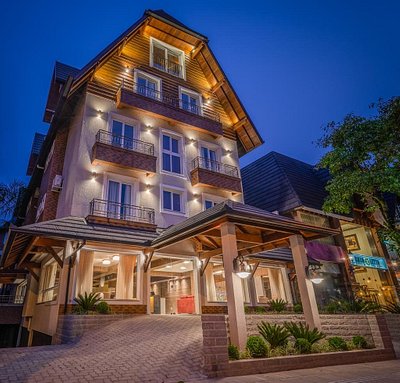 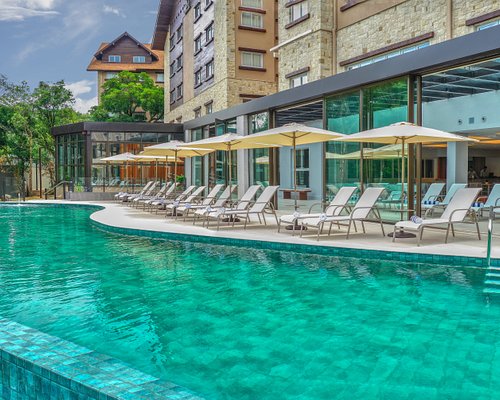 Excellent hotel for the price. Located in an special residencial área in Gramada, the hotel is 1.5 km from downtown, an easy walk. The rooms don't have anything special, but the inside warm swimming pool is delicious. The breakfast has several typical and taste products from the south, like the apple strudel. The price outside the special season is ok, but during Xmas season a little too high, in summary a good place to stay.

This review is the subjective opinion of a TripAdvisor member and not of TripAdvisor LLC.
64M123
Sao Paulo, SP
397
Reviewed March 29, 2017
Above expectation

We spent 3 days there. Very cosy and comfortable hotel. Indoor heated pool, spa, gym, outdoor pool among trees , in a nice garden. Rooms clean and quite spacious. An area of sport and entertainment for children and grown ups on the other side of the street. Bikes available. Familiar and affordable. About 10' walking to centre of Gramado. The restaurant is the poor part of it. Nothing special. I would certainly return and recommend.
Service is very good, everybody is nice.

This review is the subjective opinion of a TripAdvisor member and not of TripAdvisor LLC.
Stefano A
Porto, Portugal
2016
Reviewed June 5, 2016
Didn't make a 5 because of the pool, but that was temporary

Great place to stay, not far away from the city. For the more adventurous or athletic types, walking of biking (the hotel provides free bikes) to the city is a great option. For those more fond of eating well and no exercise, you can stay right there.
The corridors were great, our room was fantastic, incredibly comfy and newly refurbished. Everything in this hotel smells luxury and good taste (allright, maybe the tapestries on the walls will not please everyone).
The breakfast was amazing, very high quality and a huge variety. Hotel ammenities are also very nice, including a good kids rooms.
It's a good place to go with the kids. Or not.

Room tip: Rooms with balcony tend to be bigger.
Ask Stefano A about Bavaria Sport Hotel
Thank Stefano A

This review is the subjective opinion of a TripAdvisor member and not of TripAdvisor LLC.
Isadorn
Porto Alegre, RS
6241
Reviewed June 1, 2016
It's really, really , really nice!!!

This hotel is very cozy and comfortable. The service was the main differential. It was really good! everyone working there was extra nice and very helpful. Great breakfast, excellent rooms. Beautiful heated pool, sauna, mini-golf, ping pong, tennis. The bad point was that they only had supervisors and activities in the recreational area for kids on Fridays and Saturdays.

This review is the subjective opinion of a TripAdvisor member and not of TripAdvisor LLC.
Ricard_oya
Brig, Switzerland
6979
Reviewed February 21, 2016 via mobile
Great grounds but

Stayed only one night at the Bavaria Sport Hotel, and the hotel is really beautiful, it really is a nice resort. Great breakfast, really, was very impressed by all the options. But there were two things that really disapointed me, one was that in the morning there was a lack of hot water for the shower, which considering that it was not warm, it became a process to take a shower, I thought that maybe leaving the water running it would warm up, but it did not, second I think that the previous guest smoked in the room so there was a faint smell of smoke, so when we got there The windows were open which made the room really cold, and it took a while to warm up, and then we understood why the windows were open, because of the smell. So was very happy on some things but disapointed on others.

This review is the subjective opinion of a TripAdvisor member and not of TripAdvisor LLC.
View more reviews
PreviousNext
123…419