We loved our short but perfect stay here in December. The pousada is nicely located at a short distance with beautiful views of Abrahão Village. We stayed at the Eco suite which had the biggest and best bed ever and the panoramic glass shower has an incredible view. Couldn't be more romantic and definitely worth the extra money for a unique stay.
Staff were incredibly helpful with great English and went out of their way to find us last minute tours of the Island. After some kayaking, swimming and a few Caipirinhas we enjoyed our candle-lit dinner at the restaurant with its amazing views. Since the pousada is not very big, guests do get undivided attention and we spent a great evening with interesting people from all over the world. We loved the Hi-Low combination of Asalem which combines simplicity and nature with the luxurious and comfortable rooms (and BED). For such an isolated destination, we were amazed to see the quality in their service and food. Ilha Grande receives too many cruises on a weekly basis, so we were lucky to be far away from the mass tourism and be treated like friends. We hope to return soon one day to explore more of the fascinating Island!More 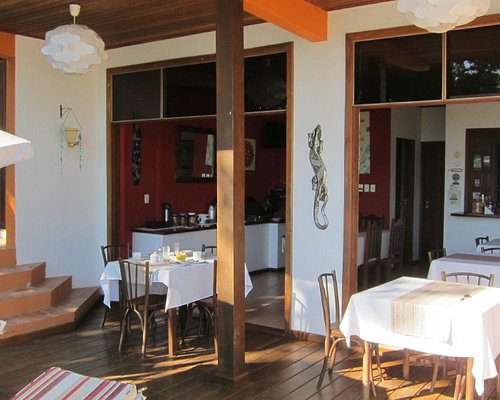 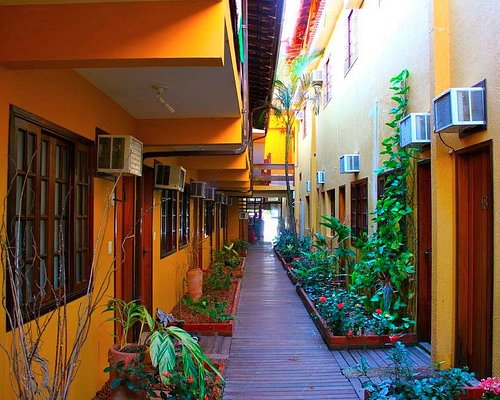 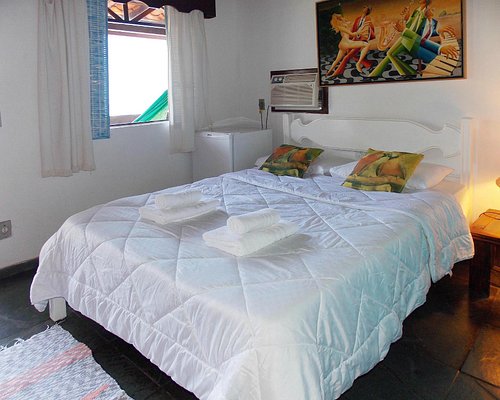 We stayed at Asalem in Dec 2012 and had a lovely time. It was the last stop of a year-long trip in Latin America, so we splurged and treated ourselves to this little bit of paradise.

The standard rooms aren't the newest... I personally think for the price they could be updated. However the bed was insanely comfortable! And we had a great terrace overlooking the sea. The view cannot be beaten.

We spent our four days there mainly walking 15mins through the forest to a beautiful beach... begins with A... can't remember the actual name! But this was the easiest and most relaxing way to get on the beach. Otherwise you have to take a water taxi everywhere which can add up.

We did take a boat out to one beach - Lopes Mendes. Highly recommend doing this. Probably the best beach I've ever seen!! And I've seen quite a few! Clear, turquoise water, great waves to jump in, white sand. Just beautiful!

The restaurant at Asalem was also brilliant. We tried a couple of other restaurants in town, and also the restaurant at the Sagu resort (rubbish) and Asalem was by far the best. You have to pre-order your food as they only have one chef, and it's all cooked freshly that evening. But it's certainly worth waiting for. The fish in coconut milk is just devine. And you're eating, relatively on your own (the restaurant only sits about 8 people) and it's just you, the sea, candlelit tables... and your amazing food!

We had a great time here. A brilliant place to finish our trip.

One thing I would like to say though if anyone from Asalem reads this.... please stop feeding the dog!! He is exceptionally overweight and I really fear for his health if he doesn't stop eating. He can barely walk 5 steps without collapsing. Not good!!

Our adorable labrador suffers from a disease of the thyroid gland that controls the body’s metabolism, which is a common issue among labradors. His diet is carefully under supervision – a special light food given in small portions divided in separate times of the day. Also, labradors are predisposed to certain joint problems, and he want's spared. In addition, he is a very old guy, heading towards the end of his life. We highly appreciate your concern though.

Report response as inappropriateThank you. We appreciate your input.
This response is the subjective opinion of the management representative and not of TripAdvisor LLC.
Wave113
Milan, Italy
1119
Reviewed January 19, 2013
Overvalued and pretentious

We spent 4 days across Christmas with my family booking a triple regular room and a double eco suite. My parents arrived from Europe one day later than expected due to airline problems, and we asked for a partial refund. We were told they could not make any exception to the reservation policy due to the high season. Fine, but very little flexibility and quite a pretentious tone in the answer
Soon after, we found out the pousada was without electricity and we had to rely on candles until the evening. No air conditioned, no fans, no possibility to recharge batteries and, best of all, cold shower (in the standard rooms they have only electric showers)
What is worse, since the water is pumped from a reservoir, lack of electricity made it impossible to resupply and my father had to take a cold shower in the employees bathroom at the entrance
Blackouts occurred two more times in e following 3 days and lasted always long enough to become annoying. A place that charges 100€/night per customer must have backup power supplies!
As a reimbursement we were offered a free dinner which did not include wine (nor service, for some ridiculous reason). The day after the dinner, 3 of us were sick, since the fish was probably old. Also, service during the dinner was abysmal, taking 3hrs almost to serve 2 simple dishes
In general, service in the morning was quite professional, i. The evening ok, but in the afternoon was borderline embarrassing, with a young lady that gave the impression of being constantly 'high' and certainly not prepared to face emergencies or take any meaningful initiative
Te Eco suite is frankly very nice and comfortable, however from outside it does not honor it's name (it is a white cement block in the middle of the rainforest). It is worth it's price, more or less. The standard rooms instead have a nice part above but a poor entrance and a terribly dark and ugly toilet, though rooms were always clean. They are another category anyways and certainly can only justify their price because of the location, but won't make you want to go back
The view from the rooms is amazing, but in our standard room there was a huge (yet beautiful) tree that made it completely impossible to observe the ocean and the landscape.
Overall a place with huge potential, some nice elements, but due to lack of organization, terrible service and excessive price I would never recommend anyone to go there

Unexpected strong winds caused lack of electricity not only in the island but around the whole coast including the city of Angra dos Reis, it was a major event beyond our power. We are now acquiring a generator in order to be backed up if such circumstances happens again in the future.
Our restaurant is very well known, not only for tastiness without pretentiousness but most of all for freshness – we have a few local fisherman suppliers who come to our water deck directly from the sea on a regular basis, so we don't need to stock up, therefore our fish/seafood is always fresh. In order to meet such standard, orders must be given hours in advance as it does take time to get ready, it is all cooked from scratch. It is not uncommon to see cosmopolitan guests having their anxiousness melted right before our unforgettably delicious dishes! Also, our cook who has been with us for over 6 years, is very meticulous and takes all the necessary steps as she understands our guest are mostly foreigners who are not used to our strong oils, water and seasonings.

Report response as inappropriateThank you. We appreciate your input.
This response is the subjective opinion of the management representative and not of TripAdvisor LLC.
Alcampbell09
510
Reviewed January 16, 2013 via mobile
Great location, friendly helpful staff, chilled out feeling

All people on ilha grande agree that it's the best place to stay. We booked the honeymoon suite for 5 nights, it was amazing. The food is great value and delicious. The staff have a few language s between them, so communication is easy.
If I return to ilha grande, asalem is where I will be staying again.

This review is the subjective opinion of a TripAdvisor member and not of TripAdvisor LLC.
antonio l
Rio de Janeiro, RJ
1
Reviewed January 3, 2013
hidden paradise

We arrived for New Year holidays to this "Hidden Paradise" Hotel in the middle of the forest but 5 min by boat from town of Abraao in Ilha Grande Brazil. We had no idea what we could find so everything was a BIG surprise.. Charming rooms, lovely/friendly staff, excellent food & service.. We simply LOVED it at all times during our week holidays here.. With bright sun or rainy day we enjoyed it fully.. Other guests were mostly foreigners coming from all over the world, NY, Japan, France, Italy so we had nice conversations zipping caipirinhas (local drink) every afternoon before sunset.. Dont miss lasagna de berengenas & peixe con banana e coco for dinner.. uffff... the best.. Sure we will be back soon.. Thanks.. thanks.. this place is a MUST..

This review is the subjective opinion of a TripAdvisor member and not of TripAdvisor LLC.
EmsJones26
Sydney, Australia
145
Reviewed December 20, 2012
Little Gem....

From the minute we arrived the staff at Ansalem couldn't do enough for us, their approach was very personable and helpful especially Jack and Paola who were very attentive. The location was amazing and the staff were pretty much at your beck and call if you wanted a water taxi into town about 10 minutes. The rooms whilst basic were very good, each has a mezzanine floor for the bedroom and is equipped with a hammock to chill out on. The small terrace area is lovely too with great views. Breakfast is great and so was dinner on the 2 occasions we ate at the hotel. I would definitely recommend this hotel for anyone visiting Ilhe Grande. Thanks again Emma and Sam, UK.

This review is the subjective opinion of a TripAdvisor member and not of TripAdvisor LLC.
View more reviews
PreviousNext
1…232425…58