Trip.com
Expedia.com
Travelocity
View all 10 deals
Prices are the average nightly price provided by our partners and may not include all taxes and fees. Taxes and fees that are shown are estimates only. Please see our partners for more details.
iam_Layla
12

If you don't care about 'onsen(thermal spring)' that much, this ryokan is the best in kyoto.
Nishiyama ryokan has a good location,
Clean & Great Japanese traditional designed room,
And sincere services.

I want to stay this ryokan again.
Even if Ryokan doesn't have onsen(thermal spring) service.
But that doesn't matter at all.
Cause this ryokan has more than that.More

Report response as inappropriateThank you. We appreciate your input.
This response is the subjective opinion of the management representative and not of TripAdvisor LLC.
See all 614 reviews
Nearby Hotels 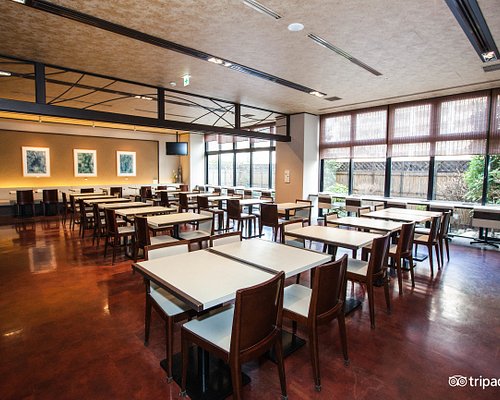 My daughter and I were going to stay at three different ryokans while we spent a week for New Years in Kyoto. But once we were in Kyoto, we chose to stay only at the family-owned Nishiyama Ryokan because the we got the best experience for our money. We were enchanted by the affordable multi-course Japanese breakfasts served by the sweetest, kindest women in kimonos.

The public (divided) men's and women's bath downstairs was steamy hot and had a beatiful view of a rock garden outside. Importantly, it is in a great location to train stations for easy sightseeing, and the lobby is like a big living room, with a room off the side with tables for games and checking emails.

We had reserverations at Matsubaya Inn, but it was far away from the Gion district, and it was more like a youth hostel. We also had reservations for our last night at Shiraume Ryokan, right in the middle of the Gion district. It was quite expensive, and since we were there for a week, we chose to save the money and get a few more souvenirs. Since the Gion district was a 5 - 10 minute walk from Nishiyama, we had the best of both worlds.

The family had a calligraphy demonstration over New Years, done on a piece of paper that was 15 feet by 15 feet, and done with a brush as big as a kindergarten child. The New Years breakfasts were stunningly beautiful, and something we'll never forget. The guests and owners played a Japanese game on New Years, which got us all laughing.

Room tip: My daughter and I chose to stay in a traditional room with futons on the floor. The first room we stayed in was smaller with a garden view. The second room looked out over the quiet street and was larger. We preferred the larger room. We could hear the bell ring from the church across the street at 8 and noon every day.
Ask kapress about Nishiyama Ryokan
1  Thank kapress

thank you very much for staying at nishiyama ryokan.
and
thank you for many photos.
many thanks
see you next time

Report response as inappropriateThank you. We appreciate your input.
This response is the subjective opinion of the management representative and not of TripAdvisor LLC.
Lionel T
New York City, New York
13
Reviewed January 8, 2013
Color me, like, really disappointed, man

For the price we expected much more of this ryokan. While the service was solid, the rooms and food were lackluster. Our western room was spacious, but the carpets were littered with stains and the walls were scratched up and showing signs of wear. The bathroom was a beige bust, ranking right up there with my Scottish university hall toilet (which was located in a building modled after a Swedish mental institution). Even the zori (sandals worn inside the room) looked sad in this dimly lit dump. We had the traditional breakfast and the kaiseki meals, at substantial extra cost, and both were uninspired and bland. Where we expected carefully plotted, refined dishes, we were instead provided with bento-box-like consolidated courses. The presentation and quality totally sapped the life out of a supposedly vibrant experience.

Seeking disappointment and an empty wallet? Stay at the Nishiyama. My advice--spend some extra cash and spring for a night at the seemingly luxurious Hiiragiya Ryokan, tauntingly located right across the street.

thank you for staying at nishiyama ryokan.
but we are very sorry that your unsatistaction,very sorry.
and we will change and try for your satisfaction.
and we will change and renew western room carpet and so on.
but our guest rooms bath is small,sorry.we can not renew guest rooms bath size becausethere are no space in guestroom.
we have public bath,if you can,we want every guests have public bath.
because this is big.
thank you
see you next time

Report response as inappropriateThank you. We appreciate your input.
This response is the subjective opinion of the management representative and not of TripAdvisor LLC.
William S
Taipei, Taiwan
11
Reviewed January 7, 2013
Cozy

The location is good, not far from main street. Staff can speak good English. We stayed in a clean and comfortable Japanese style room and had good sleep. Breakfast is good, and they also serve us with traditional green tea when we left.

thank you for staying at nishiyama ryokan
see you next time

Report response as inappropriateThank you. We appreciate your input.
This response is the subjective opinion of the management representative and not of TripAdvisor LLC.
3kids4family
Cairns, Australia
11
Reviewed January 6, 2013
family friendly, family run

We had a great time at Nishiyama. The staff were so friendly, welcoming and played with our kids - they had origami, internet and badminton in the beautiful communal area facing a tranquil garden. This is where the tea ceremony was held every morning which we all enjoyed. The rooms were neat and clean. Our first room on the first floor was a bit smoky the first night as there was a dinner on the same floor, but all other nights were great. The New Year's Day breakfast was very special and we really appreciated the explanatory notes in English which came with it, as well as some suggestions and information on what to do in Kyoto during this time. We would come again!

thank you very much
see you next time
nishiyama ryokan

Report response as inappropriateThank you. We appreciate your input.
This response is the subjective opinion of the management representative and not of TripAdvisor LLC.
TheGozzard
Rome, Italy
106
Reviewed January 5, 2013
excellent!!

What a wonderfull place. a typical ryokan in the heart of kyoto. even though it's inside a new building, our room was settled in the typical japanese style with futon and tatami. the room was cleaned and provided with 2 yakiton (a cottoned kimono) and a tea set. the bathroom is small but the hotel has a wonderfull public bath where you can live the onsen experience. it is not cheap but it's worth every yen.

thank you very much
see you next time
nishiyama ryokan

Report response as inappropriateThank you. We appreciate your input.
This response is the subjective opinion of the management representative and not of TripAdvisor LLC.
View more reviews
PreviousNext
1…525354…