StayForLong
eDreams
Snaptravel
View all 9 deals
Prices above are provided by partners for one room, with variable occupancy rules as provided by the property, and do not include all taxes and fees. Please see our partners for full details.
gorang113
Zagreb, Croatia
4931

Great location. Near to the Railway station, city center and beach promenade with bars. Staff is very friendly and helpful. You can find out where to eat, what to see. Rooms are very spacious and clean.More

Hello Goran!
Thank you very much for your warm feedback. We glad to know that you’ve enjoyed being with us.
Hope to see you again!

Report response as inappropriateThank you. We appreciate your input.
This response is the subjective opinion of the management representative and not of TripAdvisor LLC.
See all 78 reviews
Nearby Hotels 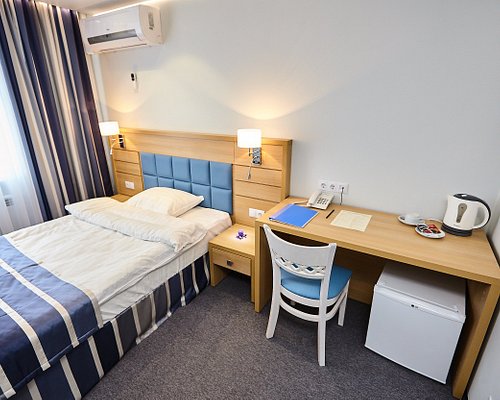 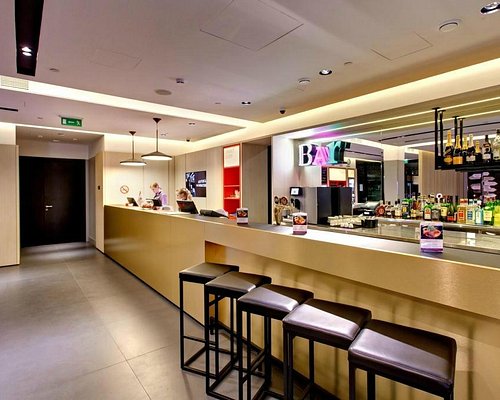 Hello, Sang-ye P!
Thank you so much for such a wonderful review! We are very pleased that you’ve chosen our hostel and that you’ve enjoyed being with us! We will be happy to see you again)
Best regards!

Report response as inappropriateThank you. We appreciate your input.
This response is the subjective opinion of the management representative and not of TripAdvisor LLC.
Kirby S
Portsmouth, Virginia
540274
Reviewed September 22, 2016
Small and potentially unsafe

First if all, my reservation was for this property but I ended up at the Barbados hostel in the same building. No public computer that I could find. 8-bed dorm is about the size of a college dorm. Barely room to turn around in the toilet. Good news is that they will wash and dry your clothes for 50 rb a load (no folding at this price. Night attendant sleeps in the kitchen/social room with the front door wide open! Guy on the bunk sounded like he had a serious respiratory disease. 5-10 minute walk from the train station, but be sure to cross the street at the station as there are no crossovers before the hostel.

This review is the subjective opinion of a Tripadvisor member and not of TripAdvisor LLC.
Dave L
Saskatoon, Canada
155
Reviewed August 5, 2016
Great Location and Helpful Freindly Staff

The hostel is located near the train station and the young lady working the front desk was very helpful and accommodating. The kitchen/common area is small and the rooms showers etc. are reasonably clean.

This review is the subjective opinion of a Tripadvisor member and not of TripAdvisor LLC.
HerrSchmeichels
1
Reviewed May 17, 2016 via mobile
Hostel advertises nonexistent shared facilities

We booked a room at Optimum with a promise of a shared kitchen and lounge area, which were also shown in pictures. Arriving late at night we found it odd that we couldn't immediately find them, but read here on TripAdvisor that they might be closed in the evening.

Inquiring about it in the morning the hostel staff responded that the kitchen had been removed (apparently to fit another single room) - but they still advertised these facilities. We felt betrayed as the room price was higher than average on our trip thru Russia, and had counted on having a real kitchen to cook in.

We managed to negotiate a discount with hostel staff, but thru a series of misunderstandings we were later forced to pay the full price as they finally threatened us with calling the police.

I could not recommend this place for anyone looking for the usual hostel setup - this is something else. Even the 24h front desk they promise is never manned, but they have staff in their sister hostel around the corner.

This review is the subjective opinion of a Tripadvisor member and not of TripAdvisor LLC.
Fish_EDI
Edinburgh, United Kingdom
240144
Reviewed April 22, 2016
Really strange setup

I want to give this place a higher rating but in all honesty I cannot. The hostel claiming to be called Optimum doesn't seem to exist. The address is real and indeed the building has a sign saying optimum, however the buzzer on the door doesn't work and even once you get inside (which I did only due to another person entering the building) there is no door for Optimum and a prettys cary staircase leading to nowhere. By a stroke of luck I met someone who worked in the hostel and he took me to a totally different entrance in the building which was actually a hostel called Barbados. This new hostel looks a bit like the photos of Optimum and is actually very comfortable. I am at a loss as to why they have this set up. Why is Barbados being advertised as Optimum when they are almost the same place and why does the doorway for Optiumum not instruct people just to go round the corner to Barbados? So, even though there is no real hostel at 17 Aleutskaya, the hostel which is pretending to be Optimum is actually fine and in a good location. It is very central and has good facilities, it's just a shame that it was such a strange experience on arrival. Also, as optimum, or the hostel claiming to be optimum generated my Russian visa invitation paperwork, I expected them to register my visa. The staff refused. Thankfully I didn't really need to register, but if you are in a situation where it's needed then perhaps seek an alternative in Vladivostok.

This review is the subjective opinion of a Tripadvisor member and not of TripAdvisor LLC.
View more reviews
PreviousNext
123…
<script type='text/javascript' crossorigin='a