Much more than a hotel... - Suginoi Hotel

Orbitz.com
Priceline
ZenHotels.com
View all 13 deals
Prices are the average nightly price provided by our partners and may not include all taxes and fees. Taxes and fees that are shown are estimates only. Please see our partners for more details.
JapanCustomToursNZ
Shinjuku, Japan
82106

Much more than a hotel...

The room was spotlessly clean but the bathroom was a bit tired looking and the towels were very thin. Good shower though.

We didn't take up the inclusive breakfast and dinner rate, but wish we had. Ate at the buffet (banquet!) restaurant one night and it was fantastic. The buffet halls (there are two) are huge.

There is a half hourly shuttle bus to/from Beppu Station which was very handy and there is a good-sized supermarket in the station complex. We ate at the station japanese restaurant one night and it was great food and cheap too.

The rooftop spa was was great. My husband also braved the men's (naked) pools and enjoyed them too.
Do go 10 pin bowling in the 36 lane rink - terrific fun. And walk up the road at night to admire the spectacular lights!

We really enjoyed our stay but don't recommend it to first time visitors to Japan: the hotel is a well-known Japanese spa resort and mainly caters for the home market. Not much english is spoken so you need to be confident in saying please, thank you, sorry, excuse me etc and have a phrase book handy. Also, it is not a place for the timid traveller - people with a sense of adventure will most likely love it, but it could be a bit of a culture shock for others.

Overall a whole lot of fun!More

Show less
Room tip: It's probably worth paying more for an ocean view as it is beautiful.
See all 1,101 reviews
Nearby Hotels 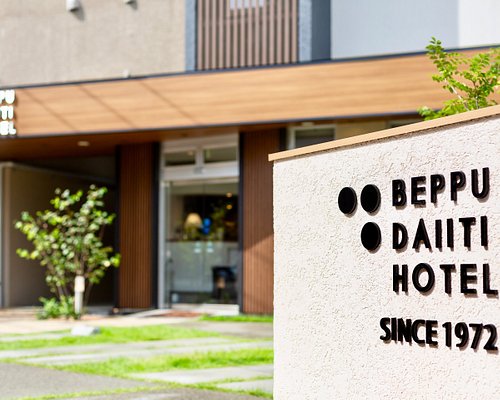 I don't recommend this hotel to solo traveler who like to keep things practical and don't speak japanese. The big draw for me was the onsen on the rooftop and view. I was looking for something better than the relatively inexpensive hotels i use to stay in while in Japan.

This place is not just than a hotel: it's a huge, self-contained, holiday compound, made of 3 connected buildings, with multiple restaurants, traditional "banquet" areas, karaoke, video game arcade, shops, onsens, swimming pool.. to give an idea about the size, it was a 15mn walk to go from my room to the pool, which is why the hotel has a bus service just to move people from one place to another!

As another reviewer said, it is like a cruise. It is very very crowded, and felt like a club of old japanese people and families, all dressed in yukata, which is nice in many ways, but make you feel a bit out of place. We were really a minority of non-japanese people.

My room was western and japanese at the same time: western beds and bathroom, with a nice tatami room with table, chairs and TV. While the tatami part was really nice, the western part was very dated, straight from the 80s. There is no internet in rooms, not even with ethernet cables. Maybe it will be a selling point someday. You have to go in the lobby to get some wifi.

I have no idea if the onsen is great, simply because the staff didn't let me in, nor did it explained me why. Most of the staff has very little command of english, and the onsen staff has none. This was a big letdown. There was probably a way to solve that, but considering the distances between the buildings, the fact that the staff speaks little english, and that the onsen was probably over-crowded anyway, i decided to abandon the idea altogether.

Ask Luc B about Suginoi Hotel
10  Thank Luc B

This review is the subjective opinion of a Tripadvisor member and not of TripAdvisor LLC.
Anutara T
Nonthaburi, Nonthaburi, Thailand
17
Reviewed September 28, 2012
It does not look like 5 stars. It is a mass hotel.

I have been to many 4 or 5 stars hotels around the world. There is none look like Suginoi in Beppu. There is not a clock in the room. The room is smelly. The floor, corridor and many spots are dated--need major renovation. I slept with runnig noise from above and outside the room. There is no body lotion. Messive people walk back and forth. You cannot expect privacy. Provided hotspring baths are opened for outside people, not just for hotel guests. Imagin of more than 100 people together in the dinning room. Far away seaview is expected. There is nothing to complain, as well as nothing to impress. You will feel like you go to a public pool. So, it may be a 5 stars public amusement.

This review is the subjective opinion of a Tripadvisor member and not of TripAdvisor LLC.
Bob W
Seattle, Washington, United States
5054
Reviewed September 27, 2012
A great experience

I had a great time staying at this hotel because there is so much to do. Endless amounts of food to eat, bowling, watch the light shows, and even the soak in the pools/hot spring pools. Some of the views from the hotel are really nice because it faces the ocean. The buffets are really good, especially the dessert menu...LOL....Anyways definitely worth the trip...

The only problem that we had was no wifi in our room, but only in the lobby. This is a great place for families/couples

This review is the subjective opinion of a Tripadvisor member and not of TripAdvisor LLC.
Fiatstud
Hiroshima, Japan
58
Reviewed September 6, 2012
Good food dated room

With the great pictures on the website and a travel agent telling us that this was the best of beppu we were expecting a lot. We were a bit disappointed. The room was large and clean but hardly worth the price we paid for it. The dinner and breakfast buffets were excellent, and almost made up for the let down of the room. We were also very excited for the picture esque pools but alas it you have any visible tattoos you are not allowed to go in. I would not stay here again. There are better hotels in Beppu.

This review is the subjective opinion of a Tripadvisor member and not of TripAdvisor LLC.
PaperinaViaggiatrice
Pisa, Italy
3515
Reviewed July 6, 2012
wonderful, but there isn't internet in the rooms!!!

wonderful but internet is ONLY in the reception!!! what a shame!!

This review is the subjective opinion of a Tripadvisor member and not of TripAdvisor LLC.
View more reviews
PreviousNext
1…161718…
<script type='text/javascript' crossorigin='anonymous' asyn