Depending on the room you can have one completely renovated, or one in need of renovation. Ask some questions about this before booking.

This is not the top luxury level of Club Med, but definitely worth it. In terms of food too.

The evening shows are amazing, given the fact that they are played by the "regular" GO's.

Main asset of this Club Med: fantastic GO staff. All of them are friendly and ready to help, 24/7.

See all 2,541 reviews
Nearby Hotels 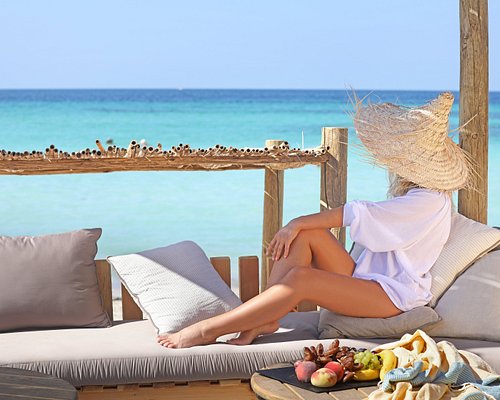 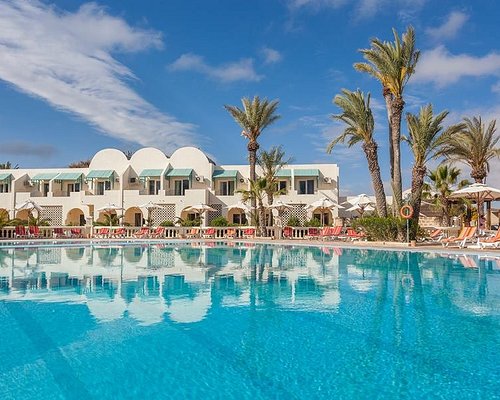 Taking safety measures
We compared the lowest prices from 3 websites 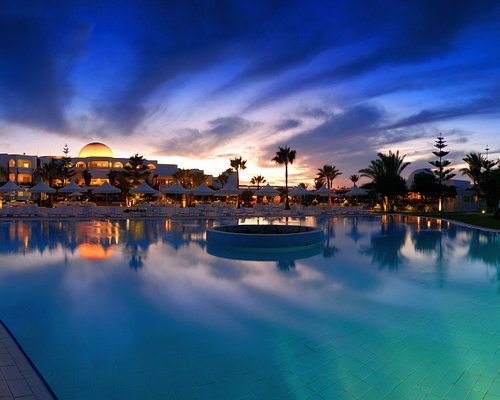 As always ClubMed does not disappoint. Ok, this was family oriented and only 3 * but the food and drink was excellent with unlimited water sports (we learnt to sail a Hobie Cat) and as always the staff were friendly, helpful and enthusiastic. Great beach and clean rooms too, only minor is the poor internet; ok I hear you say, we are on holiday, but in this day and age being able to quickly check emails etc is a given. Sorry. Highly recommended.

Room tip: Try to get a bungalow by the beach in Aziza
Ask Bodazapher about Club Med Djerba
1  Thank Bodazapher

This review is the subjective opinion of a Tripadvisor member and not of TripAdvisor LLC.
pilipili2009
Anvers
317151
Reviewed April 21, 2014
Perfect for families with kids

We spent a week at easter. fantastic weather. Youssef, the chef de village, and the GO team were full of energy, making this a great experience. Typical Club Med atmosphere. Good sports infrastructure: many catamarans, and always enough wind for good sailing. Many tennis courts as well, making tennis and sailing two sports you can perform without having to queue. The restaurant capacity is limit for the size of the village. Some queuing for the best dishes. Also at the bar of La Douce: not enough staff for the number of people present. Nice sandy beach, ideal for small kids.

Room tip: We are at Aziza, best to take a high floor, you here your upper neighbours walk on the stone floor.
Ask pilipili2009 about Club Med Djerba
Thank pilipili2009

This review is the subjective opinion of a Tripadvisor member and not of TripAdvisor LLC.
Tom W
Vence, France
2935
Reviewed March 13, 2014
Wow, how good was that!

Youssef (General Manager) and his team were fantastic. From the surprise chocolate buffet fest after the show to the surprise firework display to the foie gras starter to the freshly squeezed (in front of you) orange juice for brekkie to Youssef welcoming you on arrival, playing football with your son then taking part in the shows to saying goodbye to you at 6.30am on your departure day. Club Med should appreciate him but please don't promote him to a desk as that'd be a loss for their holidayers (just pay him more to stay if necessary!)
Really importantly, the rooms were good, well heated, good interconnecting for the kids and the beds really good. We slept well and it was really quiet.
I don't understand those that moan about the value for money, where else do you get scheduled flights with good times; good food, good bar, airport transfers direct to your hotel (and not going round the houses doing dropoffs); good quality beds; free kids club (THAT THE KIDS WANT TO GO TO - DON'T MIX THIS UP WITH A FREE KIDS CLUB THAT'S RUBBISH). We'd see our daughter off at 8.50 every morning, she'd come back for a shower at 5.10pm and then be gone again at 7pm for dinner with the kids club and we'd see her after their show at 9pm.
And to those that complain it's all in French - hallo - it's a French company! They all speak English anyway, and wanted to, and what's wrong with anglophones making a bit of an effort? You wouldn't go off with Thomas Cook and expect them to speak anything other than English would you? We had GO's coming to sit with us for lunch because we were English.
Yes, a good holiday, we'll definitely go again.
Just one small thing - we wish Club Med made more of their outside pools heated off-season - but then we were aware of that before booking so can't complain and the inside one was lovely, big, clean and heated to 27 degrees anyway. But it's not the same as a heated oudoor pool. In 2007 we had all three oudoor pools heated in Hammamet but haven't found that since at Club Med - what's happened?

Room tip: Sea view is worth paying extra for. We were in Calypso rooms which were lovely.
Ask Tom W about Club Med Djerba
Thank Tom W

This review is the subjective opinion of a Tripadvisor member and not of TripAdvisor LLC.
Atombomb24
Abcoude, The Netherlands
3317
Reviewed November 15, 2013
Great place to go with kids

Stayed here mid November and had a great time. Admittedly it is very French orientated however all of the staff were happy to help, the amenities were of a high standard and the food was great. Not really sure what the previous reviews were so unhappy about as the quality, amount and variation of dishes for dinner was excellent. For example, the lamb we ate was excellent, the steak perfect and the fresh grilled fish was delicious.
Only minor complaint on the dining experience was the fact that the wine was not chilled; am I too cynical to suggest it's so you don't drink too much? Saying that there is a bar open from 9am til 2am so I'm not sure why this was the case.
For the kids there's a shaded playground and a dedicated area in the dining room where food in pots can be microwaved - the 'adult' food was what my 2 year old ate and loved.
Beach was clean, pool area was lovely, the gym was adequate and the lady who cleaned our room was very friendly (and did a good job).

Give this place a try - it's a great place to stay.

This review is the subjective opinion of a Tripadvisor member and not of TripAdvisor LLC.
mb313
Geneva
18995
Reviewed September 27, 2013
Not sure what French love about it

1st Club med experience. It wasnt our 1st choice but due to lack of other holiday options we went for this. Would we go back? I dont think so, it was OK but nothing what you wont find elsewhere with better value for money ratio. That said here are few points which may help you to decide:

1.Arrival – upon arrival in Djerba before boarding the bus you will be given your room keys and badges. Make sure you have some shorts, flip flops in your hand language as last time you will see your suitcase will be when you board your bus. They tend to deliver suitcases straight into your room but with delay. So if you are keen to hit the pool/beach right after arrival has essentials ready.

2.Language - This is French and only French speaking resort. Very GO speak English or any other language so be prepared. That said its great if you want to improve your French and get away from les anglais.

3.Accommodation – all bungalows are same style/standard. G30’s and B 50’s are best to be avoided as they are next to the main entertainment area/nightclub and car park. Terraces are all facing inner court and there is no garden furniture so you won’t use them at all
4.Dinning –main restaurant is buffet style for all meals. Food quality just OK, monotonous (chicken this, chicken that, seabass, burger, pizza, various cold salads). Poor quality coffee (powder dispenser). We hoped that recently renovated Calypso side will be better but it wasn’t – limited selection of the stuff you will find in the main restaurant.

5.Hygiene – rooms/bathroom OK but you better off not to study the buffet area too closely or your appetite will be gone weight too quickly. Let’s put it this way – a little scrub all over dinning area wouldn’t harm. Bad luck if you don’t like cats as they are all over dining room and if you leave table unattended you will also find them on your table. Waiters don’t seem to be too bothered with “scaring” them off, in contrary they will happily throw them left overs.

6.Sport – only made a use of tennis, archery and sailing – can’t complain, well organized. That said I was surprised by lack of marketing for their sport activities. There were no brochures inside the room providing any information about sport/kids club, just a flyer for spa. Rather disappointing. The print out schedule can be obtained upon request from reception but beware that it doesn’t match the timetable on the spot especially for body balance/body step/pilates classes.

8.Beach – to the left of the main reception has lots of seaweed and unpleasant smell. They try to clean the seaweed away every morning but smell seems to be around all day. Beach on the Calypso side is nicer. There are plenty of sun loungers and umbrellas around.

9.Excursions – done the trip around the inland just to break the monotony. If you have been to Arabic country before and you are not fussed one way or the other than don’t bother. Nothing new to be seen:)

Room tip: G 30's are no go - right next to the main Entertainment area and night club B 50's - facing main arrival area and car parc so best to be avoided Other than that all bungallows are the same so its all about location
Ask mb313 about Club Med Djerba
5  Thank mb313