$10
Free cancellation until 12/12/21
View deal
StayForLong
Expedia.com
Hotels.com
View all 10 deals
Prices are the average nightly price provided by our partners and may not include all taxes and fees. Taxes and fees that are shown are estimates only. Please see our partners for more details.
andreeeeej
Prague, Czech Republic
3520

Found this guesthouse as one of the first ones that were free. The bamboo room price was OK - but for just 50 Baht more, as we found out later, you can have hot water in the other hostels. But with fan it was 200 or 250 Baht, so quite OK price (with hot water it was 350; the rooms at the riverside were around 500+).

As for the rooms, they were perfectly acceptable for the price, though we also saw some geckos (but didn't mind them). The rooms and beds were quite clean, the staff was nice to us - and also the breakfasts were fine. Fortunately, no karaoke sessions occured on the river, because the rooms have poor sounds insulation... The wifi was there - we even got the signal at the room.More 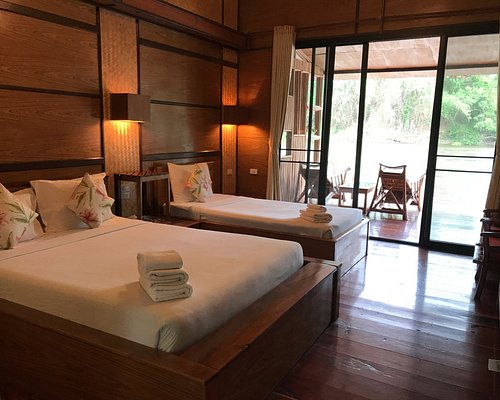 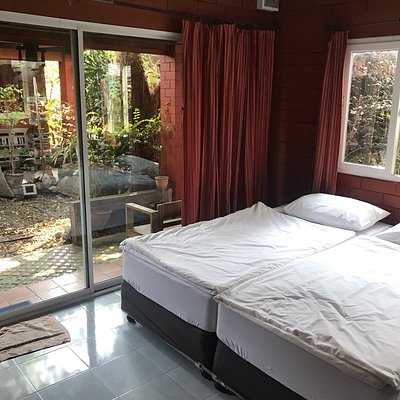 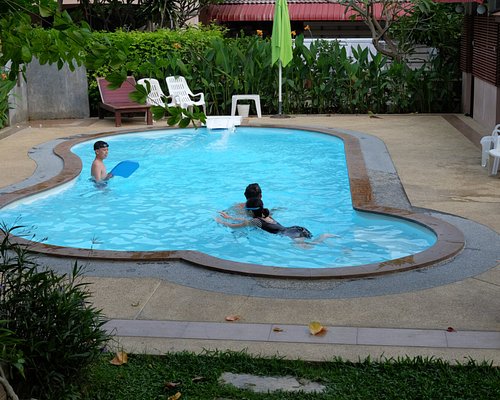 Clean and nice. Very helpful price. Good location to get the bridge on Kwai river - about 10 minute walk. Room was really cheap. We spend there nice 2 days. Dont forget to go to Erewan waterfalls - great views.

This review is the subjective opinion of a Tripadvisor member and not of TripAdvisor LLC.
Bofi123
610
Reviewed January 26, 2013
You get what you pay for!

We had a good room with riverside veranda. Hot shower with fresh towels (although no soap).
The room was clean enough but would never in a good homes competition! The breakfast was adequate...nothing special. What spoilt the whole experience was the miserable staff who could not do less for you. Unlike other places we have stayed the staff seemed to find us a bit of an inconvenience and this meant we only had breakfast there before going out. We never used their bar or communal areas.

This review is the subjective opinion of a Tripadvisor member and not of TripAdvisor LLC.
sarahinguangzhou
London, United Kingdom
4429
Reviewed September 11, 2012
cheap guesthouse in Kanchanaburi

Sugar Cane represented good value for money. The place was cheap and you do get what you pay for but the room was clean and the breakfasts excellent.
There were slightly more expensive rooms actually on the river but I stayed in a little bungalow-style room. There were around ten of them all laid back in a horseshoe shaped design.
Only cold water, and fan-cooled, but you do get what you pay for.
Only the one man there seemed to speak any substantial amount of English, but he was very helpful.
In a street full of similar properties I would certainly recommend it.
Great location.

This review is the subjective opinion of a Tripadvisor member and not of TripAdvisor LLC.
Greg G
Eindhoven, The Netherlands
89
Reviewed September 10, 2012
Really bad rooms and unfriendly staff

The room was 250Bath which is pretty cheap but for the same price you will find much better rooms in the same street! The room smelled like our laundry after a few days of jungle trekking. The staff was unfriendly and the food... guess what, it was bad too! We moved the next day to blue star and we had a much better, cleaner room with AC for the same price.

This review is the subjective opinion of a Tripadvisor member and not of TripAdvisor LLC.
Ohmytravels
Bangkok
6471
Reviewed October 14, 2011
Basic but great for it's price

Want to stay on a river bungalow with views of the River Kwai Bridge? Choose here - we've stayed here twice and, although the rooms are basic with lumpy mattresses, it's clean, cheap and the staff are excellent. The food is good too and you can even do a bit of fishing off their small pier.

This review is the subjective opinion of a Tripadvisor member and not of TripAdvisor LLC.
View more reviews
PreviousNext
1…567…
<script type='text/javascript' crossorigin='anonymous' async onerror='__scriptLoadError(this,true);' src='https://static.tacdn.com/assets/-