Unless you're seeking a high end hotel you're likely to pick Lee Gardens Plaza hotel (LGPH). Not to be confused with 'Lee Gardens hotel' which I presume to be its sister hotel about 5 minutes away. Like its name, the hotel is integrated with familiar retail convenience such as MacDonalds and Watson pharmacy. Location triumphs in the natural selection order and LGPH is right at the top in this category, being the tallest & largest landmark. First time visitors shall notice airport level of security on the grounds and fancy card access corridors. Streets come alive within the perimeter of the hotel each night and if you fancy a street meal at 5 am you can be sure that you're in a safe zone. Rooms are basic but super large and spacious. Hot water, fridge and TV always work. Window views offer the sight of entire cityscape. Breakfast is great and guests dine in a super large convention type hall with almost 180d view of the city. LGPH is looking a little jaded and some renovations is needed to freshen up this popular hotel. But its still my choice Hatyai hotel because of the festive atmosphere and the easy reach to most conveniences.More 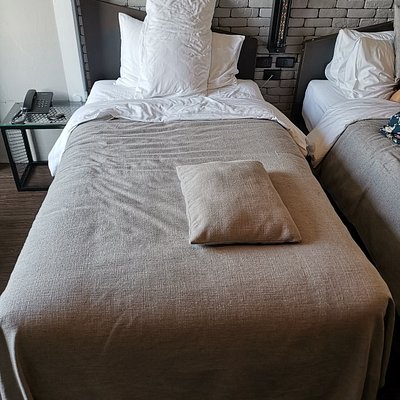 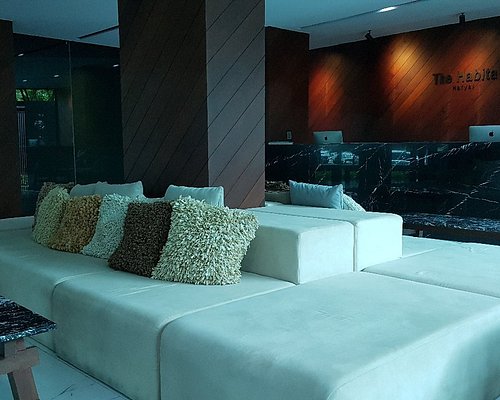 This is a continuation from my Penang trip as we travelled up north to Hatyai. I opted to stay alone and was given a corner room. The Chinese believe that corner rooms or rooms facing an exit or staircase are the most haunted. Call me superstitious but I would rather not offend them. Being assigned a corner room and staying alone for the next 3 nights, I did what I needed to do and sure enough, I had no issues during my 3-night stay.

Due to the recent bombing in the basement, there are armed security personnel outside the hotel and entry to the hotel requires walking through a metal detector and having your personal belongings checked. Although inconvenient, I appreciate these arrangements as they do act as a deterrence against further terrorism attacks.

Another inconvenience though, was the fact that you have to take a lift to the 10th floor to reach the hotel frontdesk. That was where we checked in and we then transferred by another set of lifts to the hotel rooms.

My room was on the 16th floor right at the end. It seemed to be more spacious compared to other rooms. The bellboy unabashedly asked me if I needed a "lady" or wanted to watch "Thai girl shows". I declined politely, tipped him for sending my luggage up and sent him on his way. My main grouse was there were some spikes jutting out from the edge where the tiles and carpet meet. I couldn't see very clearly as the room was rather dim so I resorted to jumping over that area if I have to cross it.

The "double" bed was actually formed by joining two single beds and then draped over by king size bedsheets. As I was sleeping alone, I had no issues and could sleep quite comfortably. The housekeeping could not speak much English. I forgot to bring my travel adapter and requested to loan one but they did not have any for loan and asked me to purchase one at the 7-11 nearby.

Two bottles of drinking water were provided daily but there was no toilet paper despite having a dispenser there. Read from other reviews that this was the norm. Shampoo was provided but no shower foam. I guess we were expected to use the hand soap (bar type) provided.

Breakfast was reasonably fine but had the almost the same spread for the 3 days I had it. For dinner, there was a promotion for buffet at the top of Lee Gardens at only 99 baht per pax! The food was quite good for a < S$5 buffet. You won't find this anywhere. Other than that, try to eat out as there are plenty of street food in Hatyai.

Wifi access was down for on some occasion during my stay and my calls to the housekeeping who promised to escalate the issue were of no use. I had to walk to the frontdesk to complain before someone picks up the phone to get the IT department to look into it. The Wifi access points were just cheap TPLink end user routers mounted on the ceiling outside my room.

In conclusion, this hotel has one of the best locations but the rooms are tired looking. If you only want a place to dump your luggage and to sleep at night, then this hotel is probably good.

Room tip: The view from this hotel is pretty good. Make sure that you get a higher floor if possible. Ask for Wifi access so that they will allocate you a room closer to the access points.
Ask HowardToh about Lee Gardens Plaza
3  Thank HowardToh

This review is the subjective opinion of a Tripadvisor member and not of TripAdvisor LLC.
ceekay_fun
Kuantan, Pahang, Malaysia
13
Reviewed June 27, 2012
Nothing but only location

Best of all, toilet roll was not provided and when check with the service staff m she asked us to use the tissue instead.

The massage service in 7th floor, their attention is the tv on the wall ,, not their customers.

This review is the subjective opinion of a Tripadvisor member and not of TripAdvisor LLC.
John W
Jakarta, Indonesia
11
Reviewed June 24, 2012
Terrible hotel. Avoid

The room was not well ventilated and full of cigarette smell. The carpet was also very dirty and tatty. I complained the staffs and asked them to move my room. Couldn't enter the replacement room at the first attempt because of keycard issue, had go back down from the 22nd floor to the lobby at the 10th floor. The new room had better smell and better carpet. However, I found other problem, the water drain was blocked and the aircond was not cold enough. Too many problem with this hotel, definitelly will not stay at this hotel again.

This review is the subjective opinion of a Tripadvisor member and not of TripAdvisor LLC.
sivakay
Kuala Lumpur, Malaysia
620
Reviewed March 26, 2012
Good location and nice aerial view

We stayed one night in Mar 2012. We got the 19th Floor so the aerial view of Hat Yai during daytime and night time was nice. The room was clean and everything functioned. Only problem was the lift as you need to switch lift to get to your room. We paid 1300baht for a night with b/fast for 2. They were strict about no of pax at b/fast and took height measurement of our kids.We should have just paid and had a family b/fast as eating outside came to just as much. The buffet at the 10th foor had ample choices of fruits. At night, right in front of the hotel you will find many mobile food stalls. Look out for the 'teh tarik' man and try it - it;s delicious. And a whole bazaar selling clothes/shoes.

We arrived in Hat Yai without any prior booking.There are many other hotels in Hat Yai town, some going at 650baht per night for a family room.

Room tip: Get a room at the top floors if you want a view.
Ask sivakay about Lee Gardens Plaza
4  Thank sivakay

This review is the subjective opinion of a Tripadvisor member and not of TripAdvisor LLC.
CeaserBoy
Bangkok, Thailand
12898
Reviewed March 16, 2012
Its all about location...nothing else.

I have stayed in this hotel 5 times since 2007. It used to be good but the hotel now has aged tremendously but surprisingly the management has not noticed it. My last trip was in December 2011 and it was the worst.

Toilet has permanent stains and looked really dated. The carpet was smelly. The wardrobe was about to fall apart. The bed was not comfortable, it has sunken. The pillowcases smelled horrible (I need to covered them with my t shirts) and the curtains have tonnes of holes and stains on it.

The breakfast spread was the same since 2007, or maybe longer...even the food arrangement on the buffet line remained the same throughout the years.

It a big hassle to get to your rooms from the ground floor as you need to know which lifts to take and the lifts were constantly full. It is a very popular hotel with tour groups mainly due to its location and rates.

I would not be returning to this hotel soon unless the management decides to embark on a major renovation project.

The hotel is about location....nothing else.

This review is the subjective opinion of a Tripadvisor member and not of TripAdvisor LLC.
View more reviews
PreviousNext
1…313233…