Not too shabby - Sunset Business Hotel

Sunset Business Hotel
Sunset Business Hotel
Lowest prices for your stay
Lock in the lowest price from these sites
$52
$42
View deal
Priceline$42
Hotels.com$42
Expedia.com$42
eDreams$42
Travelocity$42
Trip.com$52
View all 15 deals
Prices are the average nightly price provided by our partners and may not include all taxes and fees. Taxes and fees that are shown are estimates only. Please see our partners for more details.
Jsquiggle
San Francisco, California
1011

We stayed in a standard double room on a Sunday and Monday evening. Our room itself, on the 13th floor, was nice. Great views and a decently comfy bed. However, the thumping base from whatever restaurant/club from wherever could be heard throughout the night. I read reviews about the noise, but was hoping that being on a higher floor would help. Not so much. It was better on Monday night, but only because the scene was much more subdued.

Finally, there was an issue with the free breakfast with room - I booked through asiarooms.com, and that showed that one breakfast per room was included. However, the front desk was hesitant to give us the free meal coupons, as the price we paid didn't include a breakfast according to their matrix ofpratts. I had to show my confirmation email that showed proof of breakfast. (By the way, paying the additional 10,000KRW for another person for breakfast isn't really worth it.)

I'm not sure I'd stay again, but the price was right, and the location was good for a trip in November.More 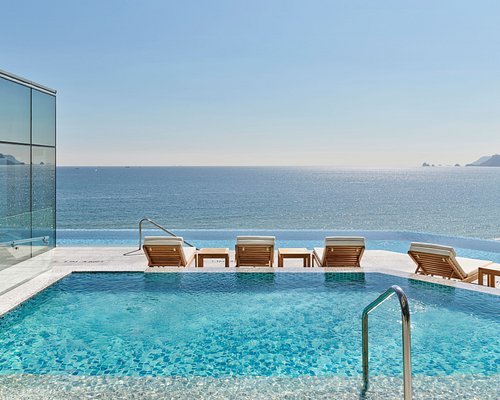 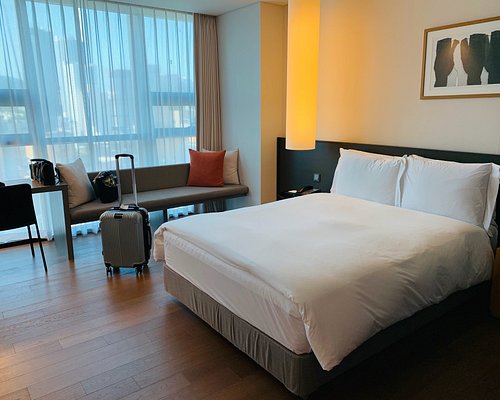 When the cab dropped me off in front of the hotel, I got excited because it was in a nice area with such proximity to the beach. However upon entering the building I realized that the hotel was not the entire building but just the upper floors. The first few floors were restaurants, a tanning club, a bar and a Karaoke place.

I arrived a little past 3pm so check in was a breeze and my room was already ready.
Upon arriving in my room I was happy to see that it let a lot of light in, there were huge windows with a view of Haeundae beach which was a pleasure waking up to every morning.

The hotel is situated right beside a KFC, Baskin Robins, several Coffee shops, restaurants and a G25 convenience store, which is like a 7-eleven and a FamilyMart. (now called CVS, not to be confused with the US based Pharmacy)

The room was very spacious for a solo traveler like myself but it could comfortably fit a family of 3. The bathroom was spacious as well, and the room had 2 sinks, one in the main bathroom and another in the Budoir Area.

Everything in the room was great except for the air conditioner which was hard to figure out, there were 2 remote controls (both in Korean) So I gave them a call in the lobby and guess what? They can control the Air conditioner from there so that fixes that problem.

The TV had mostly Korean channels so I just didn’t watch that much of it.
The internet in the room was rather slow and glitchy, My unlimited data roaming on my mobile phone was faster. Although, there are several computers that you can use in the lobby to surf the net and to print boarding passes, tickets or maps.

The Breakfast was pretty basic. They served sausage, eggs, rice, bacon, bread, fruits, cereal, salad and yep you guessed it, Kimchi. Don’t feel bad if you wake up late and missed it.

Checking out was such a breeze just went to the lobby surrendered the key and that was that.

It was such a nice treat staying at this hotel, the area was nice, rooms were clean and big

This review is the subjective opinion of a Tripadvisor member and not of TripAdvisor LLC.
Summmmer
Singapore, Singapore
134
Reviewed November 4, 2012
Pretty good stay near the Haeundae Beach

Stayed in standard ondol room for 3 nights. 3-5 minutes away from Haeundae Beach, 5-10 minutes away from subway/bus station, a distance away from the main KTX station though via subway. Room is great, clean, spacious shower, good heating system. My only complaint is the noise during one of the nights, there's music ongoing for almost the entire night disrupting my sleep (not sure where it's coming from, the hotel shares the building with other shops, with its lobby on the 9th floor and rooms from 10th floor onwards). Otherwise, overall it's pretty good.

This review is the subjective opinion of a Tripadvisor member and not of TripAdvisor LLC.
JargalE
Ulaanbaatar, Ulaanbaatar, Mongolia
1
Reviewed October 3, 2012
Perfect location at the beach

This hotel is reasonably priced option, if you want to combaine the stay at the beach with city sightseeing, cleanliness, huge bathroom with spa and they provide very nice breakfast buffet. And also the best location to subway station (5minut walking distance) Haeundae beach is 2minut away from hotel.

If you like a night life you won't be disappointed in that hotel area.

This review is the subjective opinion of a Tripadvisor member and not of TripAdvisor LLC.
iyazmin
Petaling Jaya, Malaysia
3581
Reviewed September 5, 2012 via mobile
Travel for Business with Free Wifi

It's not often you travel in Korea in search for good, clean hotel with free wifi. That was what I wanted and I got it for free.
I did rate the cleanliness as just average not because the rooms were not clean...it was. But the lifts leading to the hotel floors were not. It gives the place a dodgy feel when you have cigarette butts and plastics strewn around. But to top it off, there were flies too! The hotel needs to do something about that since the lift itself gives the first impression.
Nonetheless, my deluxe room was clean and large at a very reasonable rate. It had a large flat screen tv and roomy space.
Service was so-so. I had called to book a taxi for my ride back to the airport and was assured during checkout that my taxi was waiting for me downstairs but unfortunately it wasn't (I was not late). But cabs around the area was abundant even at 430am.
Still I would definitely stay again on my next trip. All the positives surpass the negatives in my opinion.

This review is the subjective opinion of a Tripadvisor member and not of TripAdvisor LLC.
Flight17
Oslo, Norway
4948
Reviewed August 27, 2012
Fascinating lack of customer service

Sure, the website makes the Sunset Business Hotel in Pusan look charming and inviting, but the reality is far from that. Okay, so it’s not a four star property, and I never expected a grandiose experience, but I certainly didn’t expect to be treated poorly either.

Upon checking in, I asked the receptionist if she could confirm my request for a non-smoking room. She confirmed this, and I happily found my way up to my room on the 14th floor. When I opened the door, I could immediately smell the stench of a room that had been smoked heavily in, and over a long period of time. I checked the room to see if it had an ashtray or a sign indicating that smoking was allowed, but I couldn’t find anything. I contacted the reception to ask for another room, but was told that the hotel was full and that the only thing they could do was give me a deodorizing spray that I could use. I found that a bit suspicious, and later during my stay I noticed that the housekeeper trolleys had several spray bottles of the same kind. Now, luckily it helped to use both the spray I got, as well as one that I bought at a local supermarket. Still, I find it totally unacceptable, and they could at least have admitted that my room was for smokers. Had I not prepaid my room, I would have found another hotel.

During my stay, there were several things that annoyed me. The air conditioning was extremely noisy, and was a nightmare to operate. And how come there was no desk in the room, even though the hotel’s name is Sunset Business Hotel? Further, for a business hotel, I found it extremely annoying that the breakfast restaurant didn’t open until 8 am. Now, the restaurant actually served a nice breakfast, and everything was clean and the staff was very helpful. But seriously, no breakfast until 8 am?

But the biggest and worst surprise would be served coldly at 6 am on the morning that I checked out. I was asked if I had taken anything from the mini bar, which I hadn’t. I was then told that I had taken more than the one complimentary bottle of water per day, and that I had to pay for the rest. Well, guess what? In the mini bar, which was replenished daily, there were two bottles of water that were each clearly marked with the following text: “THIS BOTTLE OF WATER IS PROVIDED FREE OF CHARGE”. So what if I was a solo traveler and had booked a single room? There were still two free bottles of water, and how could I possibly believe that I was only supposed to help myself to one of them per day? I got into a discussion with the receptionist about this, and I told him that I refused to pay. Finally he gave up, and I was free to go. What an annoying way to end my regretful stay at this hotel.

The only thing this hotel has going for it is the location, literally a few steps away from Haeundae Beach. But with dozens of other hotels lined up along the same beach, I don’t see any reason why anyone should choose the Sunset Business Hotel .