Not too impressed - Horison Ultima Makassar

Expedia.com
Travelocity
Orbitz.com
View all 9 deals
Prices are the average nightly price provided by our partners and may not include all taxes and fees. Taxes and fees that are shown are estimates only. Please see our partners for more details.
MizzTravelista1983
Jakarta, Indonesia
6476

true, it's centrally located. But then again, anywhere in Makassar is not that far.
the room is clean enough, but a bit rundown.
there were some 'mystery stains' on the sheets. have asked the room service to change it, but still they couldn't provide me with a pristine white sheet.
they provided quite a variety of breakfast, but nothing special to wrote about.
will try another hotel when visiting Makassar

See all 208 reviews
Nearby Hotels 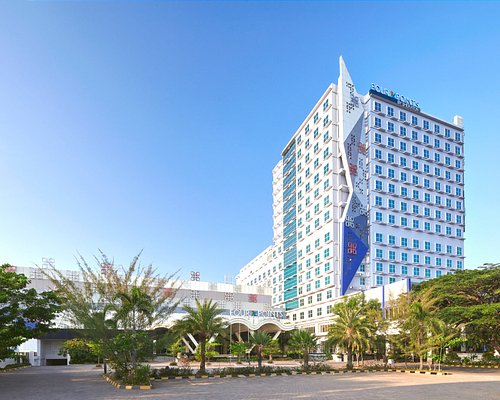 We booked a deluxe non smoking room, however, on check in were told that only smoking rooms were available. There was a convention on and the place was crowded, small elevators made it very difficult. Public areas no cleaned properly wih chewing gum spots on carpet.The gym had no supervsion and they had run out of sweat towels, also no pool towels left and lazy staff didnt offer to go and get any. Door to the room became jammed as tiles under door too high. Breakfast had almost run out at 9am, but staff went out back and chopped up more fruit etc.

This review is the subjective opinion of a Tripadvisor member and not of TripAdvisor LLC.
RobWinmar
Canberra, Australia
4045
Reviewed March 5, 2010
Not central, but a comfortable hotel

My wife and I stayed there for a couple of nights on arrival in Makassar. We had a comfortable stay, with the staff being very friendly and helpful. The hotel was apparently renovated a couple of years ago when Horison took it over. Its age shows in some areas, but overall is very good. The room was good, but we stayed in a better on in KL's Chinatown (Swiss Inn). It did have the internet through a cable, but it was very slow. The breakfast was enjoyable and there was a good range of food on display.

Location wise, it's not really near anything (despite what comments in the testimonials section on their website say - I think they must have been written by staff with imperfect English), but it's easy enough to get a pedicab to the beach. The area around Pantai Losari is nothing to write home about anyway. I think Makassar's attractions lie outside the city centre.

The pool was good to swim in, but ahead of new year's eve I found that they had put tables in it for some reason! I assume they must have had some celebration on which necessitated it.

This review is the subjective opinion of a Tripadvisor member and not of TripAdvisor LLC.
christinefun
Bali
1
Reviewed February 23, 2010
I will come back and stay for my next trip

I visit Makassar last month, January and I just love the people of Horison, they were very kind and so helpful to assist me in collecting the information of tourism spot. Other thing that i love the most is food. me and friend are crazy of seafood and Horison did something to make it much more special.

This review is the subjective opinion of a Tripadvisor member and not of TripAdvisor LLC.
edddy85
1
Reviewed February 20, 2010
Best accomodation for bussiness trip and holiday in the same time

Its located in centre of town and nearby government also private office area like banks as well shopping mall.
Withing 15 minutes, you would be able to reach the most fascinating tourism icon, Losari beach and indoor theme park Trans studio.
Food is ecxelent and service, cleanliness, are great. One thing for sure, rate is affordable.

This review is the subjective opinion of a Tripadvisor member and not of TripAdvisor LLC.
Mila S
Ubud, Indonesia
9975
Reviewed February 18, 2010
Ok business travel hotel but needs maintenance

Second choice for business travel in Makassar. Food is not great, especially breakfast- needs to be improved asap. Rooms are old and need renovation too. Only saving grace is location and staff. Popular for conferences/seminars.