Priceline
Destinia.com
Trip.com
View all 8 deals
Prices are the average nightly price provided by our partners and may not include all taxes and fees. Taxes and fees that are shown are estimates only. Please see our partners for more details.
AzfarAizat
Kuala Lumpur, Malaysia
1428

the hotel is just a stone throw away from the MRT Hubei station exit C/D (can't remember)...very easy to find the hotel actually...as soon as u exit the MRT station u can see it...read some reviews that the hotel is located at behind some ugly walls, but when i was there, nothing was there blocking the hotel and the lobby is at the ground floor now...probably previously there were some renovations being done at the hotel...
there are many restaurants around, pharmacies, even a supermarket...there is a convenience shop at the ground floor of the hotel...less than 15 minutes walk, u can find a Halal restaurant called ZFY restaurant...good & recommended for Muslims (let me know if u would like to know where it is)...also, less than 10 minutes walk, u can reach the Dongmen Pedestrian Street...

basically, everything is within walking distance from this hotel...the only down fall of this hotel is that there is no wifi in the room, no value added service (cab service to airport, arrangements for tour, etc..), not sure if this hotel has a restaurant or a coffee house as i can find it at the ground floor, no toilet at the ground floor or the lobby floor...

Cons:
-No wifi connection in room
-No value added service
-No toilet at ground/lobby floorMore 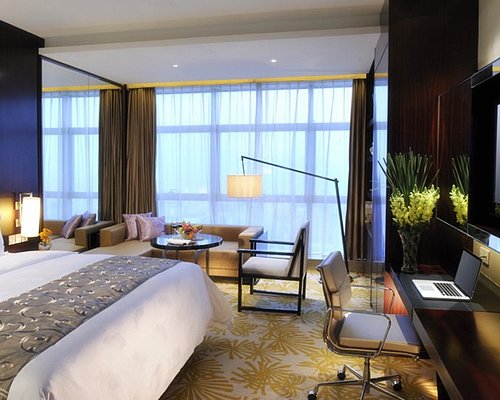 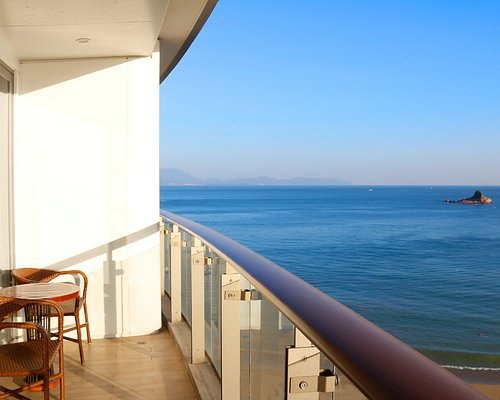 Taking safety measures
We compared the lowest prices from 13 websites
The Langham, Shenzhen

I'm surprised at all the good reviews this place has received. The place is marketed as a budget/boutique hotel but what it really is is "love" hotel (condoms and other sex products are provided in the room). Please beware of staying here. The rooms are dark, noisy and smell like a cheap brothel. Suspicious stains are everywhere. Although my room was pre-paid I did not stay there. I checked out immediately and went to another hotel nearby.

This review is the subjective opinion of a Tripadvisor member and not of TripAdvisor LLC.
kevin0870
Hong Kong, China
3837
Reviewed June 1, 2011
Decent hotel and good price!

The hotel is located within 5 minutes walk of the Dongmen pedestrian area and the Shenzhen Metro. There are many restaurants (several open 24 hours) located nearby, as well as supermarket. The hotel lobby is not on the ground floor and there were no staff available to assist with luggage, taxis, etc. The ground floor and lobby level were under construction/renovation and were a bit of a mess. However, the room was quiet and I wasn't disturbed.
The room had an interesting design, with an open bathroom. The toilet and shower were in separate "stalls" at the front of the room. There was a small refrigerator, which was nice for storing snacks/drinks. The TV had Chinese channels only. There was free wired internet, with a very long LAN cable that could reach to the bed, if needed.
The only issue with the room was the air-conditioning, which was controlled by remote control. Unfortunately, the remote control was only in Chinese and had many buttons. So, I had to guess on how to operate it and it took many tries to get the cool air going. Even when on full (coldest setting and high fan), the room did not get very cold, especially in the day time.
I had some laundry done and they requested cash payment, when they collected the laundry. I thought this was a bit strange, but it was quite inexpensive. When I checked out they asked me where the laundry bag was (as they laundry staff had not returned it, when my clothes came back). Do they think I was trying to steal their laundry bag? Very funny! Overall, the hotel is not a bad choice and the price was low.

This review is the subjective opinion of a Tripadvisor member and not of TripAdvisor LLC.
johnf88
Sydney, Australia
2020
Reviewed May 25, 2011
Good value, good location, well laid out room

I thought this was a really good hotel for the price.
The room was well designed, so while not large was very comfortable.
The room had a tiled floor and other low maintainance finishes which worked well and much better than a dirty carpet. The bathroom ajoined the main room separated by a frosted glass panel which worked well to make it more spacious.
I stayed on the Shennan Road side. It was not noisy with the window closed but the other side would have less noise if you are sensitive.
There was always one member of staff that spoke good English and they were friendly and helpful. The reception was on the third floor but was in the process of moving to the ground floor.
There are no restaurants in the hotel but plenty about the area.

This review is the subjective opinion of a Tripadvisor member and not of TripAdvisor LLC.
EurasiaVoyager
Asia
29216
Reviewed December 4, 2010
A lovely surprise behind an ugly facade

Hello and thanks for reading my review. If you liked it, then please do not hesitate to push the “Review was useful” - button, XIAXIA ^_^

In this review, it would have been very helpful to see all the many pics that I took, but unfortunately I left my digicam just a few days later in the seatpocket of a plane on a domestic flight in Indonesia, and not only the cam, but as well all the pics were gone :-(
If you are eager to see pics, there are many good pics on the agoda-website, which as well is the only major booking system where u can book rooms at this hotel.

I had read before that this hotel is located behind the walls of an ugly building and yes, it is like that indeed. When the Taxi driver dropped me, and I was standing in front of the building and eventually entered it, I thought by myself “oh god, where am I”. Things became more pleasant once I entered the lobby (which is located on the third floor), and became outright pleasant, once I arrived at my room. Despite the ugly building, this hotel is actually pretty new, and the rooms are almost “stylish”. I really liked the design, stonen floor (I hate those musty carpets found at so many places) and efforts had been made to even cater for smaller details. As in many of those new Chinese hotels, the bathroom is somehow integrated in the room, but in a way that did not bother me in any way. The room décor is in dark colors , which makes the room appear a bit dark too, even during daytime when the curtain is open. But there is sufficient lighting. Plenty of electric sockets to charge all ur mobilephones, ipods, laptops and whatever.
the location is very central, just 5-7 minutes walk to the Dongmen Pedestrian street, where there is a MRT-station as well, in case you want to connect to Shenzhen's growing subway-network. The MixC-Mall can be reached in a leisurely 15-17 minutes stroll (maybe not so leisurely when it rains or during the heat of the summer-months), or in a 5-minutes cab-ride. It is on a very busy thoroughfare, and yes, street-noise could be a problem. Though, the windows did shut surprisingly well, and did therefore let little of the rather monotonous street noise in. I am usually quite sensitive when it comes to “noise” as I am a light sleeper, but in that case it really did not bother me. Maybe it is a bigger problem if you have a room on a low floor. You could ask for a room to the back of the hotel (I did that, but in my case, there was no such room with queen bed available on that side at my early check-in time of 1 p.m.). the hotel does not have a restaurant, but in your room you will find a menu of a Chinese fast-food (fastfood in the meaning of: getting the food quickly, not in the meaning of “junk-food”). They do deliver to your room, but it is actually located right next to the hotel, so you can easily go there by yourself, particularly as it is open 24 hours. On the ground floor you find as well a 7/11-style convenience-store where u can get snacks, drinks, icecream or whatever u want. Behind the hotel there are numerous inexpensive Chinese restaurants, so you won't go hungry at any time of the day. There are quite a few of karaoke-joints nearby too, but at least in the room I had, I did not experience any noise from those places.
Reception staff was friendly and helpful and spoke enough English to discuss anything that I wanted to know or inquire about. When I asked them to write down the Chinese name and address of the hotel in Guangzhou I had to go after checking out in Shenzhen, they even called the hotel there to make sure they gave me the correct information and address. Great Service attitude !
I really liked the room-design a lot and it is difficult to describe it with words, too bad my pics were lost. In case I stay overnight in Shenzhen again in the future, I will most probably choose this place again, as it offers great value for money. Oh, one thing, they try to advertise themselves as a “4-star”. Well, it is NOT a 4-star (who would excpect that for such a low roomrate), but it is a very decent and new 3-star-hotel that I would not hesitate to recommend to others.