$231
$115
View deal
Priceline$134
Hotels.com$218
Destinia.com$231
View all 18 deals
Prices are the average nightly price provided by our partners and may not include all taxes and fees. Taxes and fees that are shown are estimates only. Please see our partners for more details.
Nezar Q
Jeddah, Saudi Arabia
3018

The tower is not new, but its well mentained and re-furnished. The room is modern style which I really like. but the bathroom is very old and not matching with the luxery level of the hotel. morover, the shower was the worse I had in any 5-stars hotel.
The best advantage is the daily orgnized shuttles to Wild-Wadi waterbark & Jumeirah private beach as well as Dubai mall.
The hotel is lacking some fine touches to be among the top hotels of dubai. also they should consider the relatevely high rates to the hotel age.More

Thank you for taking the time to share your feedback on Tripadvisor following your recent stay in Jumeirah Emirates Towers.

We are delighted to read your review post your stay in the hotel. It gives us great pleasure to know that you enjoyed your stay with us highlighting your experiences regarding the shuttle services provided.

Rest assured that your invaluable feedback is important to ensure that we continually deliver the ultimate experience Jumeirah Emirates Towers is renowned. Your comments regarding the style of the bathroom, as well as the shower quality has been brought to the attention of the concerned department head in order for us to further review and assess our facilities. Please accept our sincere apologies for any inconvenience caused in this respect.

We are looking forward to welcoming you back in Jumeirah Emirates Towers.

Meanwhile please do not hesitate to contact me for any further assistance.

Report response as inappropriateThank you. We appreciate your input.
This response is the subjective opinion of the management representative and not of TripAdvisor LLC.
See all 4,277 reviews
Nearby Hotels 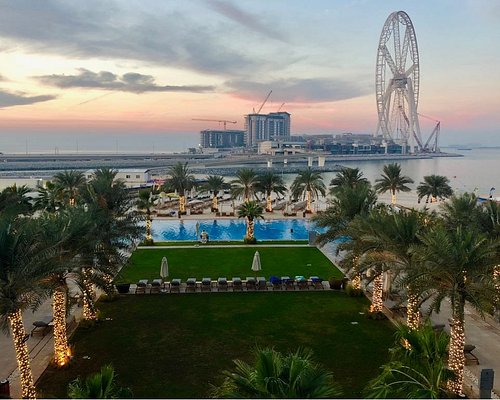 I had an amazing experience at Emirates Towers. The staff are well trained (although it was fully booked and during the Dubai Shopping Festival), great food (either at the hotel or room service), perfect rooms (as in spacious and modern decor), and housekeeping is amazing as well. Honestly, I think this is the best hotel I can ever think of and I would stay there again!

Thank you for sharing your experience from your recent stay with us at Jumeirah Emirates Tower on Tripadvisor.

Once again, thank you for taking the time to post your review on Tripadvisor. We look forward to welcoming you back on your return to Jumeirah Emirates Tower.

Report response as inappropriateThank you. We appreciate your input.
This response is the subjective opinion of the management representative and not of TripAdvisor LLC.
ivanK436
Ljubljana, Slovenia
7144
Reviewed January 12, 2013
Great hotel, good location

Hotel rooms are very nice and clean, hotel is not at the beach, but there is a small pool and hot tub. Staff is good and breakfast is tasty. It is very easy to find taxi and monorail station is near. There are some very good restaurants near the hotel. Hote shutle is going to the beach and Mall.

Thank you for your valuable feedback and for taking the time in writing a review, following your recent stay at Jumeirah Emirates Towers.

It will be my pleasure to share your comments with my colleagues, as they will no doubt be delighted to know that their efforts are so well appreciated.

We look forward to your next visit in the near future.

Report response as inappropriateThank you. We appreciate your input.
This response is the subjective opinion of the management representative and not of TripAdvisor LLC.
Leonie H
Sydney, Australia
819
Reviewed January 11, 2013
Great end to a long holiday!

Excellent hotel and wonderful staff...oh and the food is great too! Our stay was such a luxurious welcome after travellling through India for almost three weeks. India is a magical country but Dubai sure knows how to bring on the bling!

Room tip: Ask for a room that looks out over the Dubai skyline!
Ask Leonie H about Jumeirah Emirates Towers
2  Thank Leonie H

Thank you for choosing to stay in Jumeirah Emirates Towers and for taking time to write a review in Tripadvisor about your stay in. I am delighted to read that you chose our hotel over the many options available in Dubai.

I was delighted to read that you enjoyed your stay with us and was pleased with the service and facilities at the property. All your kind comments are highly appreciated. Please rest assured that we will share your feedback with our colleagues accordingly.

We look forward to welcoming you back to our hotel in the future.

Report response as inappropriateThank you. We appreciate your input.
This response is the subjective opinion of the management representative and not of TripAdvisor LLC.
Latimer
United Kingdom
35111
Reviewed January 10, 2013
A much better stay

We first visited the hotel in Oct 2011 and had a very disppointing experince. I have to say that Jumeirah responded very well to my compliants to them and so we decided to try them again for two nights at the end of last year.

Our experience couldn't have been more different and from the minute their car picked us up in Abu Dhabi to the time that we left everything was perfect.

We had a really enjoyable stay, made even more so by an uprgade to a lovely suite with fab views on the 32nd floor.

Breakfast in Mosaico was excellent with lots of choice and we also ate a buffet lunch in there one day which was one of the best I have experienced.

We tried Al Nafrooah (Lebanese) and The Rib Room on this visit; both were good but Al Nafrooah just had the edge thanks to its lovely outside terrace.

The hotel was very busy as it was coming up to New Year and on New Years Eve they opend the upper terrace for the pool, which made it a great spot for sunbathing and a welcome addition to the small lounge area around the pool.

The free entry to Wild Wadi and the access to the beach at Mina A Salam give this hotel added benefits over other city based properties and it's proximity to the metro makes it a good central choice for seeing the rest of what Dubai has to offer.

Many thanks to Mirzaf and the team.

Dear Guest,
Thank you for taking the time to share your feedback on Tripadvisor following your recent stay in Jumeirah Emirates Towers.

I would like to personally thank you for giving us another chance to redeem ourselves. Indeed our guests’ feedback are important to us in order for us to improve on our services and to aim to always exceed our guests’ expectations.

We were really happy to hear that you enjoyed your recent visit to the hotel and that you were particularly pleased with the excellent service starting from pick up from Abu Dhabi, as well as the view from your suite. We also are thrilled to know that we have met your expectation regarding your dining experiences, I will be sure to share your comments to our teams in Mosaico, Al Nafoorah, and The Rib Room, also Mirzaf and the Front Office Team, as they will be more motivated to continue delivering outstanding services and product quality to our valued guests.

We look forward to welcoming you back to our hotel in the future.

Report response as inappropriateThank you. We appreciate your input.
This response is the subjective opinion of the management representative and not of TripAdvisor LLC.
kazanina
Doha, Qatar
87
Reviewed January 10, 2013
My worst experience in Dubai. Customer service minus 100 points!

I booked a room 2 days prior to arrival. When I reached the place, receptionist told me that there's no any room available at that time!!! I had to insist and miraculously room appeared but needed to be cleaned for 10 minutes what took another 2 HOURS! of me sitting and waiting in the lobby! yes, room was nice, view was amazing. Breakfast was included and next morning I procedeed to the restaurant. There was a waiting list and about 15 people sitting outside!!! After half an hour I finally got inside. When I finished my breakfast waiter brought the bill!!! 140 dirham! I didn't pay cash, only signed but the mood was spoiled coz breakfast was supposed to be included. When I checked out it became clear that signature was just a formality, nobody charged me extra 140 AED but still that confusion was disappointing. By the way, breakfast menu is same every single day! The last day of my stay I went out to have some drinks with my friends. On my way back home there was a concierge who stopped me near the lift! I was wearing a cocktail dress to make it clear what happened next. The man assumed I'm a prostitute going to the bar on the top floor! He stopped on my way to lifts and asked me where I was going. I told him, that I'm going to 31st floor, he told me "Mme, 51st floor is here, another lift!" I said again: "31st", he insisted "Mme, bar is on 51st floor". I said "I'm going to my room". I had to report to concierge where I was going! There started to come spectators. Like 10 people where already staring at me and waiting for the end of the story. I had to show him the key to let me inside the lift!!! And this in front of other people who were russians and europeans! such a shame! I was embarrassed and furious!
I will never never again come to that Emirates Towers. They have no respect to their customers!

Thank you for taking the time to share your feedback on Tripadvisor. We value all guest feedback as an opportunity to continue to improve our services and products for our guests. I was of course most concerned to read your review about your disappointments due to the unacceptable experiences with our colleagues.

I have noted your feedback regarding the points you have so kindly brought to our attention. Please accept our sincere apologies for the inconveniences caused in this respect. This is certainly not the level of service we are known for and can fully understand your disappointments. Please note that I have personally passed your feedback to all the department heads concerned in order to review our practices, processes, and procedures, most especially when we are dealing with our guests. Rest assured that proper coaching in delivering our service standards to our valued guests will be done to all the colleagues involved.

Thank you once again for sharing your feedback on Tripadvisor and thereby giving us the opportunity to enhance our service quality. I do hope that this incident will not deter you from visiting Jumeirah Emirates Towers in the future and that you will allow us the opportunity to restore your confidence in the ultimate hospitality Jumeirah Emirates Towers is known for.

Report response as inappropriateThank you. We appreciate your input.
This response is the subjective opinion of the management representative and not of TripAdvisor LLC.
View more reviews
PreviousNext
1…454455456…