$120
View deal
Free cancellation until 12/12/21
Reserve now, pay at stay
CrownePlaza.com$115
Priceline
travelup.com$135
View all 18 deals
Prices are the average nightly price provided by our partners and may not include all taxes and fees. Taxes and fees that are shown are estimates only. Please see our partners for more details.
amnahennaa1
Dubai, United Arab Emirates
12

A perfect place to enjoy with your family & friends .Food is so delicious mix of all dishes Indian ,Italian and more ,they got so many variety .
Desert section was also good & the staff is very humble to you
Highly recommended place to visit and enjoy friday brunch
More

Thank you for posting a review of Friday Brunch at our Spice Island restaurant.

We are so glad to hear that you had a lovely time. The variety of cuisines is essential when catering to a multinational crowd of Dubai and our chefs tried their best to master an extensive and plentiful menu of international dishes.

I will share your kind feedback with the restaurant's team. I am sure they will be excited to hear your thoughts.

Meanwhile, I'd like to invite you to try our new Flaming Thursdays, the grill night, which we just launched.

Hope to see you in Spice Island again soon.

Report response as inappropriateThank you. We appreciate your input.
This response is the subjective opinion of the management representative and not of TripAdvisor LLC.
See all 1,581 reviews
Nearby Hotels 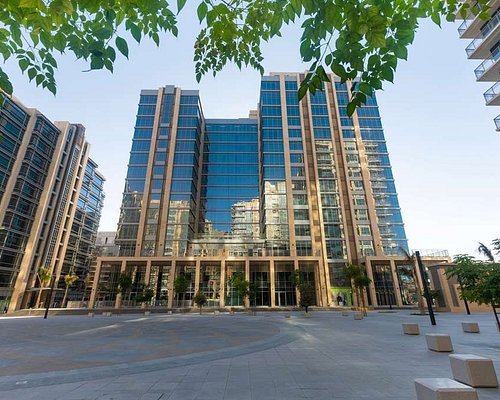 Crowne Plaza was a WOW experience, and the hotel deserves its 5-stars. The staff was really kind. I have booked a junior suite, which was the largest junior suite I ever have been at. The room was clean and the WiFi was ok. It disconnected from time to time, but it was not a huge issue. The hotel in general needs an upgrade.

The pool area is really nice with a huge rooftop pool. It was easy to get a sunbed. The area was clean. At the pool area you will also find a cozy bar.

I had access to the club lounge, which is one of the best club lounges I have been at. The staff was really kind, and they server nearly full breakfast even they are calling it continental. Its includes eggs in any style and other hot dishes. At the cocktail hour they nearly serve a complete dinner. The club lounges is worth the money.

Conclusion:
I will love to come back to this hotel, and I will really recommend this hotel. Book a room with access to the club lounge. It is a really cheap 5 star hotel. You don’t find all the fancy restaurant in this area, but I like the local restaurants.

Thank you for this wonderful detailed review of Crowne Plaza Dubai-Deira.

I could not be happier reading about your experience at our property. It feels truly rewarding to read a comment from a happy guest and see how our daily efforts were recognized.

I am happy to see that the facilities of the hotel were up to your expectations and, most importantly, how my colleagues made you feel at home with their kind attitude and assistance.

The Club Lounge area of our property is always highly praised by the guests, we usually receive great comments because it's really spacious, quiet and full of daylight. I am glad you enjoyed yourself at the Club Lounge and experienced the true value for the money paid.

I look forward to welcoming you back again some day.

Report response as inappropriateThank you. We appreciate your input.
This response is the subjective opinion of the management representative and not of TripAdvisor LLC.
ZMalik786
Solihull, United Kingdom
4050
Reviewed June 30, 2019 via mobile
Family holiday in Dubai

Family of six went to Dubai for 8 days and split our stay between two hotels, ie first five days in Dubai Marina and the last three nights at Crowne Plaza Dubai Deira.
Hotel is very impressive as one would expect for a 5 Star. Check in was a quick pleasant experience with an upgrade to the sixth floor (quiet floor). Rooms were very clean and modern. Highly appreciated!
Unfortunately a down side for us was that at check in we requested that the room fridges, which are tiny, to be cleared out from the hotel drinks, as firstly we wanted our own water/ soft drinks, but secondly, and most importantly, needed to store insulin medication in the fridge for two of the group. I was assured it would happen immediately, some two hours later had to chase up, again nothing happened. On the fourth attempt I demanded to see the manager; unfortunately he wasn’t around for another half hour but on this occasion it was a different man at the reception, who apologised and promised to action within the next 5 mins - which he duly did.
Thereafter the stay was very pleasant. To be honest the surrounding area of the hotel is a dump, though loads of restaurants but nothing of class, plus one didn’t feel safe walking around late at night unlike other areas in Dubai. The Reef mall is about 5 mins walk and is okay to visit for shopping and somewhat limited restaurants. Hotel is wonderful and that’s why I have given it four stars ( would have been five but for the insulin episode), location only deserves a two star, and for that reason I would stay here again unless it’s a stopover stay.

Thank you very much for posting a review about our hotel on TripAdvisor.

It is always great to receive a sincere feedback from a guest, covering several aspects of the experience. This truly helps us to see our performance from the guests' eyes and understand where we may have occasional shortcomings. Needless to say that we grow and improve our service day by day through honest comments of our visitors, I assure you that it's the most valuable source of knowledge for us.

Every point of your review has been thoroughly checked and discussed with the concerned department. Although, I highly appreciate the high rating you had given us, I still wish to be able to impress you more during your next visit and hope for an excellent rating in the future, should you be visiting our area again. The corrective actions are being taken with regards to the service delay you described in the review and rest assured we will do our utmost to avoid similar situations in the future.

Wishing you safe travels and hope to welcome you back again some day.

Report response as inappropriateThank you. We appreciate your input.
This response is the subjective opinion of the management representative and not of TripAdvisor LLC.
Ahmed1943
Abu Dhabi, United Arab Emirates
6897
Reviewed June 29, 2019 via mobile
Final destination of happines

I call Crown plaza-Diera a Final destination to happiness , when you reach the front office , you will be welcomed by Ali and Jane who will meet and complete your check in process with an angel smile , If you manage to avoid their colleague Novediya in the front office , your day will be perfect Novediya does not have any hospitality skills at all and no smile can be seen in her face at all time , when you ask for anything she will always say no and give totally the opposite of what you are asking or looking for .

Thank you for the excellent rating and for taking the time to write a review about our hotel on TripAdvisor.

I appreciate your detailed feedback and glad to see that for the most part you had a lovely time at Crowne Plaza Dubai-Deira. I will definitely discuss your comment about one of our team members with the respective department as we always do when receiving such detailed feedback from our guest.

Once again, your opinion is truly important for us and we work hard every day to ensure that all guests leave the hotel entirely satisfied and willing to come back in the future.

Looking forward to your return.

Report response as inappropriateThank you. We appreciate your input.
This response is the subjective opinion of the management representative and not of TripAdvisor LLC.
moosaeb
Stanger, South Africa
97103
Reviewed June 27, 2019 via mobile
Excellent hotel near dubai downtown

My family had an excellent stay here.
I booked the Royal suite.
Wow it was huge and fancy.
It had 2 bedrooms en-suite,6-8 seater dining room,lounge,kitchen with no utensils and a guest toilet.
It was split over 2 floors and 250sqm.
U get full club lounge access and Mr Naushad was kind enough to allow us to have breakfast in the main restaurant.
I will recommend it for families of between 4-6
NB its a smoking suite.
So if you are a non smoker,please inform them in advance so they have it sprayed to get the cigarette smell out.
I will definitely book here again when I’m in Dubai

Thank you for your lovely feedback.

Our Royal Suite is definitely a perfect choice for a family. As you described, it is very spacious and luxurious, offering every comfort the guests may look for during their stay. I am so glad to hear that you all had a wonderful time.

It was our pleasure hosting you at Crowne Plaza Dubai-Deira.

I wish to have an opportunity to welcome you back when you are in Dubai, should you decide to stay with us again.

Looking forward to meeting you soon.

Report response as inappropriateThank you. We appreciate your input.
This response is the subjective opinion of the management representative and not of TripAdvisor LLC.
safeerd
Dammam, Saudi Arabia
5771
Reviewed June 23, 2019 via mobile
It is a real 5 star hotel and a very excellent location

If you are interested in staying in a real 5 star hotel then this is the hotel you want, the upscale service you feel at every step inside the hotel, the rooms are beautiful and the bed is very comfortable, well equipped and the cleanliness is very high too, breakfast is varied and delicious, They were the cause of my feeling of comfort and happiness in this hotel. First of all, the receptionist, Mr. Bahaa, Mr. Vijay, and The smiley director mrs Stella, and I was honored to have a great personality G.M.Mr. George Al Hashim
This hotel will be my favorite place to stay in Dubai

Thank you for the high rating.

I am very happy to hear that my colleagues and myself made your feel pampered at Crowne Plaza Dubai-Deira. At our hotel we believe that every person can make a difference. An exceptional, personalised service truly counts in our fast-moving society.

I will share your kind review with the rest of the team. It really great to hear that you were comfortable in our rooms and enjoyed the facilities as well as the food offering at the hotel.

Report response as inappropriateThank you. We appreciate your input.
This response is the subjective opinion of the management representative and not of TripAdvisor LLC.
View more reviews
PreviousNext
1…717273…