We were happy during stay 2 nights in this hotel. All staffs are helpful and room is in good condition. Interior is kind of traditional style. Many pub/restaurants and market are nearby.

After we explored Mandalay, relax at rooftop in evening is the best thing to do here. We were enjoyed sunset during sip cocktail (Which is very tasty ans strong) and swim in the pool. The view on here are superb and facilities are good.More

Thank you for taking the time to share your review with us.

We do appreciate your valuable feedback especially our rooftop pool and staff service.

We look forward to welcoming you again in near future.

Report response as inappropriateThank you. We appreciate your input.
This response is the subjective opinion of the management representative and not of TripAdvisor LLC.
See all 1,212 reviews
Nearby Hotels 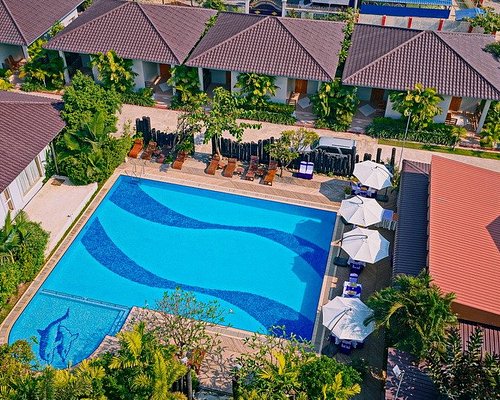 This hotel is nice and location is excellent. all restaurant near by. also many tour sights are not far from there.
the staffs are helpful and hospitality. swimming pool is good. breakfast is middle. wifi is not so good and not so bad.
the city view is nice to see from the room .

Thank you very much for your kind feedback to us.

On behalf of our team, We would like to appreciate for choosing to stay with us.

We hope to see you again and welcome!

Report response as inappropriateThank you. We appreciate your input.
This response is the subjective opinion of the management representative and not of TripAdvisor LLC.
MarenH183
51
Reviewed April 25, 2019 via mobile
Ferie

We where very happy with our stay, loved the rooftop pool. We booked a lagerer room, and it was perfect. Straff very helpful. The location was very good. There is a lot going on around the hotel, but theres no traffic at night. So no problem sleeping.

It is a great to read your wonderful review of Hotel Yadanarbon Mandalay, Mandalay. We do thank you so much for sharing your experience.
Thank you again for highlighting that room is clean and enjoyed with our environment.

Report response as inappropriateThank you. We appreciate your input.
This response is the subjective opinion of the management representative and not of TripAdvisor LLC.
Brian M
Luxembourg City, Luxembourg
407296
Reviewed April 22, 2019
Room and Customer Service make for a good stay

We a family of three stayed for two nights over the period of the water festival (between second and third week of April 2019) We had a Deluxe Room with Balcony (Rm 215). The Room was nicely appointed and big enough for three double beds. The bathroom was nicely appointed and had a big tub if you need one. The room overlooked street life below and what at first seemed like a pretty dull view turned into a real window into the heart and soul of the city. This is a city that does not sleep as the markets are up early in the morning, the restaurant and tea establishments open non stop. We really enjoyed having a front row to the busy unfoldings below us. The other purpose of the balcony was to hang up our clothes that became drenched with water if you dare venture into the streets during "Water Festival" The first hundred times you are drenched it was okay, on the thousandth time it became a bit repetative. Just know, there is no mercy for Westerners or Foreigners with getting soaked. Otherwise the balcony could have been skipped and would recommend not getting a room with one unless it is Water Festival.

The customer service is very good and they do try to make sure your visit goes on without a hitch.

The hotel when you drive up does not look like much, to the point that we were wondering if we had made a mistake by booking the hotel. However, the room with its ample air conditioning (AC), which you will need during April, more than made up for the uninspiring curb appeal of the hotel.

The roof top swimming pool is pretty cool. It literally does have some drop offs and you do get a sense you are swimming on clouds. It is plenty safe enough, no worries but if you have kids you probably will want to watch them. The only note is they need more umbrellas. Like an umbrella with every two loungers. As it was there where 3 umbrellas for about 12 loungers.

There is a kettle in the room with coffee and tea bags
The wifi was consistent and strong
TV channels. They do have a few (one or two) English channels (I think CNN).

Tips:
1. Book a deluxe room. A room on the left side of the hotel (I think).
2. Skip a balcony room unless water festival
3. Do use the pool and go up in the morning (before it becomes too hot in the summer time). Coffee by the pool was nice.
4. Overlook the appearance when you drive up. It is pretty uninspiring. The customer service and rooms make up for it.
5. Go to Breakfast either early or a half hour before close. You will avoid the "bus tour" crowds.

Suggestions to the hotel.
1. more umbrellas by the pool
2. Make deluxe room mini bars complimentary
3. Post signs in the elevators about breakfast times and when it is most crowded. Have seen this at many hotels in the USA. Just a good way for people to better program their morning.

Notes.
1. It is an hour from Mandalay Int Airport to hotel. The cost should run 15,000 MKK normally but during holiday period like we were in it was 30,000 MKK.
2. The hotel can arrange a Tuk-Tuk to get to the temples to the northwest of the palace moat should cost around 10,000 MKK.
3. The streets of Mandalay in the downtown area are laid out like USA city blocks, which is a grid and there is a lot of distance between each block (like a qtr mile). So what looks close on a map is actually not so close. We walked about 15 kilometers / nine miles (round trip) the day we decided to walk to the temples to the northwest of the place walls and moats. It looks close but not really.

It is a great to read your wonderful review of Hotel Yadanarbon Mandalay, Mandalay. We do thank you so much for sharing your experience.
Thank you again for highlighting that umbrella for the pool, Breakfast time and enjoyed with our environment.

Report response as inappropriateThank you. We appreciate your input.
This response is the subjective opinion of the management representative and not of TripAdvisor LLC.
terryn462
Chaweng, Thailand
5327
Reviewed April 16, 2019 via mobile
A great base for exploring

The staff here could not be more helpful, they were really great in trying to make the experience a pleasure, which it was.

Lots of street food/restaurants in the local area and they have their own restaurant on the sixth floor where breakfast is also served. They can help/arrange trips and actually, the price for a taxi back to the airport was cheaper than our inward journey.

If you are traveling on a budget, then this is definitely worth a close look. The pool on the roof is great to cool down in after a day of exploring. The hotel is quite central, so all the main sightseeing bits are within easy access. I'm glad it was our choice.

It is a great to read your wonderful review of Hotel Yadanarbon Mandalay, Mandalay. We do thank you so much for sharing your experience.

Thank you again for highlighting that our beautiful pool, restaurant and enjoyed with our environment.

Report response as inappropriateThank you. We appreciate your input.
This response is the subjective opinion of the management representative and not of TripAdvisor LLC.
caddyandbellA
Perth, Australia
898357
Reviewed March 31, 2019
Perfect place to explore Mandalay

When we arrived we were shown to our room (501)which was dated and in need of some updating.It was a standard room.We were going to upgrade for the time there to have a balcony but saw the balconies and decided it wasnt worth it.Rooms were small and no English speaking channels on the TV.The carpets were somewhat worn and it was hot in the hallways with no air conditioning but they left the windows open at the end of the hallway to let in some breeze.Firstly in their defense Mandalay is stinking hot in March and probably not the best place to visit at this time.The towels were older but still clean.There were toiletries,tea and coffee facilities and a fridge.The bed was very hard but this seems to be a Burmese thing with all of the hotels that we stayed in.Breakfast was upstairs by the elevator but to access the rooftop bar and pool you have to walk up so maybe not good for someone with accessibility issues.Breakfast was basic with not really many choices and eggs were limited to fried or scrambled.I had the Shan soup most mornings which was delicious.The hotel is situated right across the road from many food vendors and the streets are alive at night with many stalls to get some dinner.When you order there the language barrier is hard but they have English menus.All meals come with a soup and green tea.My meals were 1500ky or $1.50 AUD.We didnt eat in the hotel restaurant but they had a traditional puppet show every night for entertainment.Staff at the desk were good and often over run with customers as it is a very busy hotel.Taxis right outside and you can book your tours through the hotel too.My negative comments only come through comparing this place to others that we have stayed in due to its age but we were happy staying there.The area where it is a dirty with rubbish and building rubble around but the hotel is very clean.Rooftop pool had fantastic views around Mandalay and was a welcome relief from the heat after a day of touring.Spent most nights up there for an evening drink and to get into the cool.Very much a tourist hotel