$75
$67
View deal
Priceline$68
Booking.com$69
Destinia.com$75
View all 16 deals
Prices are the average nightly price provided by our partners and may not include all taxes and fees. Taxes and fees that are shown are estimates only. Please see our partners for more details.
firdasahidi
Jakarta, Indonesia
33

Great hotel, great location, but not worth the price.

The room is very clean, the staff is nice, the gym facilities is excellent. however the room is too small for price like like that. Didn’t feel like I stay in 5 stars hotel. The facilities is also not really good. The hairdryer sucks. The buffet for breakfast is also not really good. I’m a meat lovers and most of the buffet menu is processed food. There’s no steak, or any meat, only cheap food (even there is no salmon fish). I think I wouldn’t come back to the hotel even it’s located in great place. I prefer another five stars hotel that really make me feel like I stayed in five stars hotel.More

Thank you for taking the time to write a review about your recent stay with us.

Thank you also for the encouraging feedback to our team.

We apologise that the hairdryer in the room is not up to your expectations. We will investigate this.

I will also investigate why we did not have fresh steak and salmon on the buffet the day you were here. We are sorry for this.

We hope you can return so we can show you that our hotel is the best value for money 5 star hotel in West Jakarta.

Thank you again and see you soon.

Report response as inappropriateThank you. We appreciate your input.
This response is the subjective opinion of the management representative and not of TripAdvisor LLC.
See all 3,045 reviews
Nearby Hotels 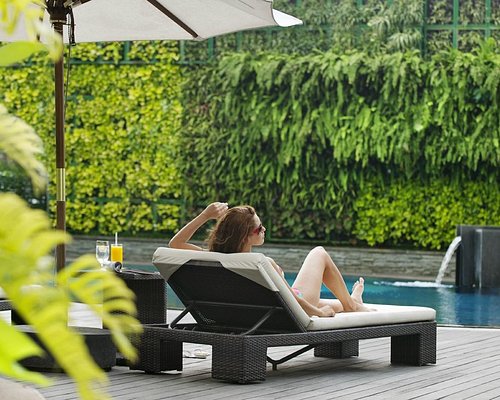 Everything is close to perfection, from service, food, ballroom and hotel rooms were very amazing. Definitely beyond expectations. I would like to shout out to few people, especially Agatha who has helped me since the very beginning till the end. She was very quick and smart and organized in helping Yolla and My wedding a success. Also shout out to Rudi, Jefri and Dwinanto for helping to make a smooth banquet. Also shout out to Wagiyo and Omel for all the amazing food at the party. What a dream team. Not only Yolla and Me feel their great services but everyone in the party were praising the pullman team for pulling off such great services. Cheers pullman team!

Thank you for your wonderful review you have posted here on Tripadvisor.

We love to receive feedback like this as it motivates us to continue to exceed our guests expectations.

Thank you and we look forward to welcoming you back.

Report response as inappropriateThank you. We appreciate your input.
This response is the subjective opinion of the management representative and not of TripAdvisor LLC.
Marco Tabo S
Jakarta, Indonesia
1112
Reviewed October 15, 2019 via mobile
Convenient and strategic

As we arrived, we did a fast and smooth check in, enjoyed the pool which was surprisingly not crowded. Very nice pool though. It's a very convenient connecting to Central Park mall with lots of choices for dinner. Thanks to Sarah, Betari, Denize, Maureen who handled us very kind and the roomboy at our floor who kept coming back to fulfill our requests
Definitely will come back to this hotel
Must trys in Pullman:
Zen Garden
Pool
Sky terrace

Thank you for the positive and encouraging 5 star review.

We appreciate you taking the time to write a great review regarding your recent stay with us. I will share this with the team.

Thank you and we look forward to welcoming you back in the near future.

Report response as inappropriateThank you. We appreciate your input.
This response is the subjective opinion of the management representative and not of TripAdvisor LLC.
afalupi
3637
Reviewed October 14, 2019 via mobile
Amazing

We went to this hotel last week for family vacation. The hotel was great and the staff very kind.

We love our room so much and my baby enjoyed the facilities there.

For the restaurant it has many choices for breakfast dish and the taste was amazing.

Mbak Dian and Garnis very genuine and helping my kid with the kids buffeet station. Thank you for both you, you guys so kind.

Definitely will come back again

Thank you for your 5 star review.

We were very happy to read that your child enjoying our family friendly facilities.

We look forward to welcoming you back.

Report response as inappropriateThank you. We appreciate your input.
This response is the subjective opinion of the management representative and not of TripAdvisor LLC.
behappygirl13
22
Reviewed October 14, 2019 via mobile
great stay!

being stay at the hotel for a night, and that was amazing! i love bout everything at the lobby it was so artistic. and the room as well. Thanks for Jennie n Silvia as the front desk, Ray n Kare as the concierge team, Rezza as the ex lounge team, Vicka and Nicky as the managers, Hirfan and Rozak as a good team, especially Susla the one who gave me a bday cake! hope will coming back soon :)

Thank you for sharing your wonderful thoughts on Tripadvisor regarding your recent stay with us.

We appreciate your positive and encouraging feedback to my team.

Thank you and we hope to welcome you back in the near future.

Report response as inappropriateThank you. We appreciate your input.
This response is the subjective opinion of the management representative and not of TripAdvisor LLC.
Rumours07
New Zealand
3853
Reviewed October 14, 2019
Ridiculous request from hotel on arrival

On arrival our bags went through security, and shock horror ! an electric iron was seen in our luggage. They said it would have to come out and be held by the hotel. I asked why and they said there was an iron already in the room. I said I knew that, but we were taking it on to the rental house we would be staying in as there was no iron in the house. Not good enough - it had to come out, then someone mentioned a voltage problem. (we were from NZ, so same voltage as Indonesia anyway). They didn't care about the fact that I had two electric hair dryers in the cases, but only the dreaded iron was the problem. After 15 hours of travelling, we really weren't up to this ridiculousness, but took it out of luggage, gave it to them, and they only returned it to us on departure. Totally unacceptable and unethical to basically accuse guests of lying when we explained why it was in our suitcase. Treated like naughty 5 year olds who have dangerous toys.

Thank you for sharing your experience on Tripadvisor. We use feedback like this to motivate the team to exceed guests expectations moving forward.

Please let me apologise about the security incident. We have launched an immediate investigation into why our security department needed to take this action.

Yes, the hotel has very strict procedures for foreign items being authorised in the rooms, we do see however the need to be understanding in your favor this particular time.

I am sincerely sorry that this impacted your entire stay with us.

I hope we can welcome you back in the near future so we can show you a very positive and memorable experience.

I will be very happy to welcome you back personally when you return. Please make yourself known upon making the booking and I would be happy to assist.

Thank you and hopefully see you soon.

Report response as inappropriateThank you. We appreciate your input.
This response is the subjective opinion of the management representative and not of TripAdvisor LLC.
View more reviews
PreviousNext
1…363738…