$57
$35
View deal
eDreams$50
FindHotel$57
Destinia.com$42
View all 13 deals
Prices are the average nightly price provided by our partners and may not include all taxes and fees. Taxes and fees that are shown are estimates only. Please see our partners for more details.
Murad I
17

I reserved the hote from one of major hotel reservation websites, they send me the confrontation with the total amount that i have to pay in the front desk without adding taxes but it was explained (1%,12% and 13% ) ,,, but that was not what the hotel asked for, the asked for almost twice the amount in the confirmation, and they weren't able to explain to me why. the only thing they say (this is taxes). 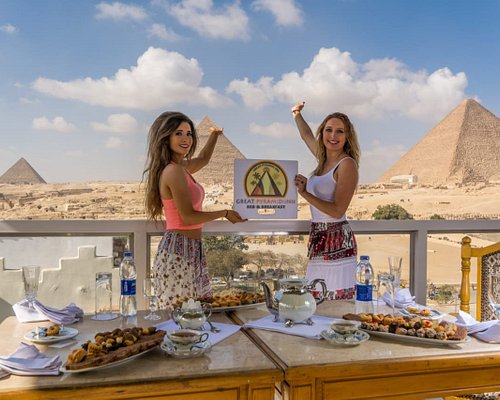 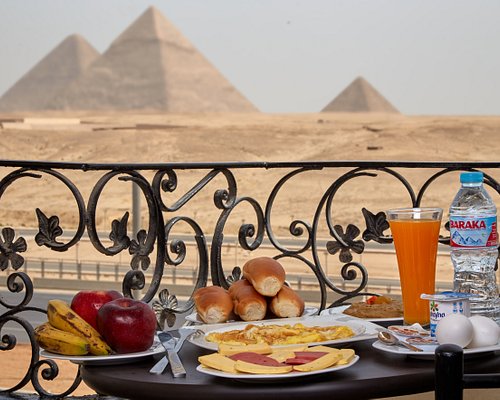 Rooms are moderate but the bathroom needs more attention.Also it needs to sound proof windows or balcony.
Front office employees ( night shift ) shows no respect and help to guests.
Breakfast is the worst i have ever seen.
The place is so noisy at night , it requies an owl in order to adapt at it.

This review is the subjective opinion of a Tripadvisor member and not of TripAdvisor LLC.
KDieterW
Darmstadt
83
Reviewed June 9, 2016
Cairo , I come back

It´s an City with different historie / , old Cairo and new Cairo but I think each of them it´s a must to see
unfortunately also marked by very big poverty

Pyramids Giza , coptic Museum , Egyptian Museums , Mohammad mosque ,
the traffic is unbelievable,
I had all time out of hotel an personal city guide next to me , so I really felt well and safe

This review is the subjective opinion of a Tripadvisor member and not of TripAdvisor LLC.
MARIANNADSS
Heraklion, Greece
3818
Reviewed January 6, 2016
overpriced, old hotel

NEGATIVES:
1)Hotel needs renovation.
2)Cleanliness is really poor!
3) They were no toiletries. We were 2 person, and we had only one towel. We have asked for another one, that never came..
3)Quality of food at restaurant needs improvement..
4)They don't serve alcohol. I respect their religion, but i can't understand this policy, as the hotel hosts tourists from all over the world..

This review is the subjective opinion of a Tripadvisor member and not of TripAdvisor LLC.
Danni161616
Hobart, Australia
817
Reviewed November 28, 2015
This place is not value for money at all!

We were originally booked into the Nile Boutique hotel and arrived at our hotel at 2.30pm to a half falling down building, there was no signs indicating that it existed let along that it was open. Once we finally found it and arrived in reception we were advised that they no longer had a room available to us due to an electrical problem. The man at reception was getting very angry at me for not answering my phone but I had no missed calls/ messages. I asked why he had not attempted to contact me via email if he had not got through on the phone and he immediately dismissed me and turned away. They made no other attempt to contact me by email to advise of an issue prior (I still dispute that they even tried to phone me). The way that the whole situation was handled was dreadful!! We were advised they had found another hotel and we would be taken there. The man said that the other hotel was 'lovely hotel, not far, same view, no problem'. We were told to take a seat in reception and wait for driver to come and get us. We asked how long and were told '3 minutes'. We asked if we could walk as it was 'not far' and they said no! We asked numerous times where the new hotel was and they didn't tell us so we didn't have any choice. This is when we realised it was a scam!! After 20 minutes we asked how much longer and we were told that driver was down stairs so we headed downstairs. After another 20 minutes the driver FINALLY showed up. The driver said he would get us there in 20 minutes (not the original 3 minutes which was promised). We drove around a few blocks in peak our traffic so it was VERY slow (Cairo traffic in peak hour) and ended up being a 30 minute drive!. We arrived at the hotel which ended up being 800 meters from the original hotel. We could have walked it in 10 minutes!!!! Instead we were treated like cattle and kept waiting for over an hour. The driver constantly repeated to us that the new hotel was lovely and the hotels were connected/ linked.
Once we arrived at the Shahrazad hotel the guy at reception was rude and at times was sniggering at us for asking simple questions about a local cash machine, map, good place to eat and getting to the airport the following day. The hotel itself was disgusting! Carpets had marks all over them, walls filthy, bathroom mouldy and generally smelly. The facilities were definitely not worth what we paid. Everything was a drama for them and were not helpful at all.

This review is the subjective opinion of a Tripadvisor member and not of TripAdvisor LLC.
MohammadKabli
Jeddah, Saudi Arabia
4216
Reviewed November 9, 2015
the worst hotel in Cairo

don't ever try this hotel , it is one of the worst hotel i ever stayed in cairo , the only positive thing in this hotel is its location and all other thing are not good and i don't give even one star.