It's Kinshasa! What do you expect? - Grand Hotel Kinshasa

$224
View deal
Expedia.com$224
CheapTickets$224
Tripadvisor$224
Destinia.com
Prices are the average nightly price provided by our partners and may not include all taxes and fees. Taxes and fees that are shown are estimates only. Please see our partners for more details.
Charles K
Acton, MA
7398

It's Kinshasa! What do you expect?

I have stayed here many times. Once, in the late 1980s, when the tower was fairly new and the service was of Asian quality. Truly, it was one of the best hotel stays ever. Over the years it has come down in standing. It is no longer managed by InterContinental, and it could use some renovation. The prices are also astounding. $4 for a glass of canned orange juice, $4.00 for a 500-ml bottle of water from the minibar, $16 for a hamburger. But Kin is an expensive city no matter where you go.

And remember, this is Kinshasa. I've been to other post-conflict (or pre-post-conflict) countries where there is no lodging even remotely as good as the Grand Hotel in Kinshasa (check out the hotel scene in Sierra Leone, for example). But the Grand is clean, the staff is friendly. You wouldn't want to go there on your honeymoon, but otherwise it's fine.
More 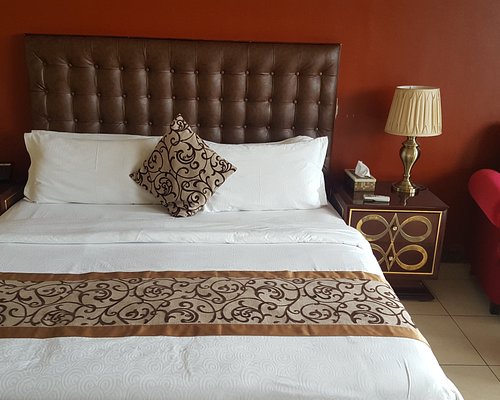 ive stopped in hotels all over the world from india, china, africa, and never have i stopped in a hotel as bad as this one.
this hotel looks very nice in the reception area, but thats about as far as it goes. rooms are really grubby and very dated, the inedible $25.00 breakfast tasted like it had been cooked in diesel oil ( no joking ) and watching prostitutes parade themselves as i tried eat made it even less appetising! i had to move out after only 2 days - of a planned 3 weeks stay. this could be a nice hotel if it had a lick of paint, new furniture, cleared the prostitutes out, changed the cooking oil, and i did stop in the new side of the of the hotel, because id read that the other side was really bad ( dread to think!)i believe in you get what you pay for but in this instance that doesnt apply for the grand, please dont think iam trying to put you off - iam being truthful, just go and see for your self ( if you dare ).

This review is the subjective opinion of a TripAdvisor member and not of TripAdvisor LLC.
Safari35514
Woodbury, NJ
145
Reviewed January 1, 2005
Disappointed

I was in Kinshasa over the Christmas Holiday as a back up singer to a fairly well-known Gospel recording artist. The pictures I saw of the Grand Hotel on the internet looked nothing like the room in which I stayed. The pictures I saw on the net were of clean bright rooms. The 4 rooms my companions and I occupied smelled strongly of mildew and the toilet seats and furniture were greatly in need of replacement. Housekeeping didn't change our sheets unless we asked them. We stayed for about 7 days with no luggage and the hotel never bothered to give a discount on laundry prices.
The front desk charged me for calls that did not connect and they also made other billing mistakes.
I would suggest that you never make calls from your room since they charge $4 per minute and there is a strong possibility of them mistakenly over charging you at which point they will not relent. You should have a pre-paid 3-band mobile phone with you so that you can call back to the states. My family attempted to reach me several times and each time, the associate at the front desk hung up on them (may have been due to a language barrier). Most of the city seems to be oppressed and the hotel is one of the few brighter spots. Food was okay, but overpriced and the choices are limited.

This review is the subjective opinion of a TripAdvisor member and not of TripAdvisor LLC.
Curiosity995
London, UK
437
Reviewed October 8, 2004
one of 2 choices in Kinshasa

You are not exactly spoilt for choice when it comes to staying in Kinshasa. Grand Hotel being one of 2 hotels where you can stay safely. I stayed a month in the hotel and found it comfortable. The beds and pillows were excellent and as the air con was fully under your control a good nights sleep was easily had. Look for a room in the new tower as rooms in older part of the hotel are not very nice in comparison. The fridge was working but had to haggle for a key as it was bizzarely locked. Also had to demand a TV remote for which a $100 deposit was taken. Room service was prompt. Would recommend the hot canapes as it is quite plentiful for a cheap price. The beer in the room bar was also not exorbitantly priced. No tea or coffee facilities in the room. The hot water was hit and miss and not available 24 hr which was a big disappointment. Staff pleasant and cleaners not averse to asking for money or relating sob stories to extract cash. The hotel disco and lobby area was patrolled usually by a few prostitutes but the security men usually kept most of them at bay (some slip through). Other residents have had nocturnal knocks on the door from girls but it is a rare event. Having said that the clubs and bars in Kinshasa are full of prostitutes and very good looking ones too so beware. For a relaxing afternoon snack the lady who makes crepes in the atrium (Whopi Glodberg dopple ganger) is recommended. All in all a quality hotel that whilst it does not fit the 5 star rating is very close to it.