$187
$145
View deal
Free cancellation until 11/02/21
Orbitz.com$187
Priceline
FindHotel$176
View all 14 deals
Prices are the average nightly price provided by our partners and may not include all taxes and fees. Taxes and fees that are shown are estimates only. Please see our partners for more details.
ukeuke
romania
24

I was very surprised to see how untrained and unfriendly the reception staff was.One of the ladies there would need a customer service training because no matter how nice the hotel may be, you leave with a bad impression because of that. The breakfast was not bad but for the rate they charge you would expect more, this was at most a 3 stars breakfast.
Overall, nice hotel but cold atmosphere.More

I was sorry to read about your dissapointment from the hotel and the service.
Unfortunately I could'nt find your details at our system.
I will appriciate if you can write me details regarding your resrvation via mail: anat.azualy@tamareshotels.co.il
I'm looking forward to hearing from you.

Report response as inappropriateThank you. We appreciate your input.
This response is the subjective opinion of the management representative and not of TripAdvisor LLC.
See all 696 reviews
Nearby Hotels 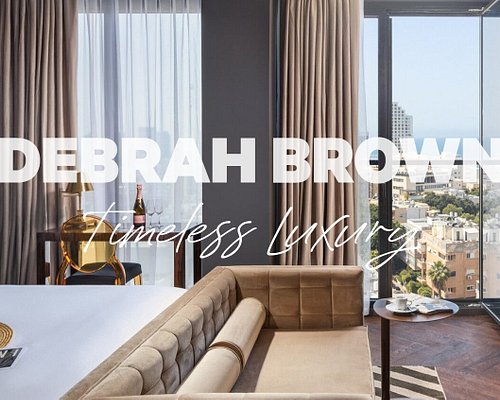 I will try to touch every important part of one's holliday.
First contact with the hotel area was quite imoressive, it looks very good, it has a large lobby and feels quite elegant and fancy.
Second contact with the front desk receptionists.I met 3 and only one was almost nice, the other two seemed very bothered to provide some guidance for a first timer in the city.I asked one of them what bus to take to the old city and her reply was priceless:" I don't know, I don't use buses, I have a car but you can take a taxi".Now,taxis, are quite special here, they are the most rude people I ever met, one of them even farted in the car.They hate using the meter ir explaining how it charges.
I tried to book a taxi from the reception, one who accepts credit card but the receptionist could only book a taxi with fix price (190shekels) which was more than we paid on the way in.Asked for one with a meter but was told that we will need to ask the driver if he accepts credit card.
The breakfast was rich enough and "exotic" for an european like me.Not the best buffet you would expect fir the price paud but not bad.
The room was great and clean with everything working.Each day it was cleaned very good so no complains here.
The location is a bit isolated so you will need a taxi as the nearest bus station is at about 15 -20 minutes walk.
The lobby ATM does nit work and the reception does nit know why as " it is not the hotel ATM" and cannot help.
There are 4 elevators so you will never loose time waiting for one.
Overall it is a very nuce hotel but it looses points because of the unfriendly reception and breakfast.

I would like to thank you for your positive feedback , I was happy to read that we have met most of your expectations.
I will be happy to receive more details regarding your expirience with the reception via mail anat.azulay@tamareshotels.co.il
I'm looking forward to hearing from you.

Report response as inappropriateThank you. We appreciate your input.
This response is the subjective opinion of the management representative and not of TripAdvisor LLC.
Davidsharon12
1
Reviewed December 27, 2018 via mobile
Not very friendly

The lady at the front desk when I checked in did not have the room ready in time. The people working at the hotel in general had an attitude. The service isn’t not what I imagined to say the least and the hotel’s food wasn’t good either.

I was sorry to read about your dissapointment from service at the Front desk , I will be happy if you can send me via mail more details.
anat.azulay@tamareshotels.co.il
I'm looking forward to hearing from you.

Report response as inappropriateThank you. We appreciate your input.
This response is the subjective opinion of the management representative and not of TripAdvisor LLC.
MarkDvora
1
Reviewed December 6, 2018 via mobile
Very Pleased

Our stay was so much better than we expected. The room very spacious and spotless. Definitely a 5 start hotel but the included buffet breakfast tops it all! The food selection was the largest we have ever seen. We would have to stay a week just to try it all out! This hotel has a nice new feel to it and a peaceful friendly atmosphere. We highly recommend this hotel. It was quiet and wonderful place to spend our 20th anniversary. We will definitely come back.

Thank you for your warm feedback, it was a great pleasure for me to read that we have met your expectations and you had an enjoyable stay with us.
I'm looking forward to seeing you again at the West hotel.

Report response as inappropriateThank you. We appreciate your input.
This response is the subjective opinion of the management representative and not of TripAdvisor LLC.
RKZ1987
2
Reviewed November 22, 2018
Excellent choice for a hotel in Tel Aviv area

This hotel is located in an ideal location. It is minutes away from all the major highways - the Ayalon (route 20), route 5 and route 2. It is past the point where the big traffic jams occur, so you can be in either Haifa and Jerusalem in an hour, Tel Aviv in minutes. And it's right next to the beach! The rooms are large and very comfortable with the latest amenities, and the restaurant is world-class. The staff is friendly and very helpful. They have ample free parking - which you never see in downtown Tel Aviv. If you want to pay a lot of money and stay on the beach in downtown Tel Aviv and walk everywhere, this is not for you - but I would gladly trade that for the quiet, the ambience, and the ease of getting everywhere. And honestly, you can be in downtown Tel Aviv/Yaffo in minutes. Will definitely stay here again whenever I come to this part of Israel.

I would like to thank you for your positive feedback , I was happy to read that we have met youe expectations and you had an enjoyable stay with us.
I'm looking forward to seeing you again at the West hotel.

Report response as inappropriateThank you. We appreciate your input.
This response is the subjective opinion of the management representative and not of TripAdvisor LLC.
Isabel M
119
Reviewed November 12, 2018 via mobile
Most rude and humiliating welcome

Travelling on business with my father, he made a reservation for one person, and I was later added to it. His flight being delayed and our stay being paid for already, I was aware of an extra fee per person. Upon arrival, I was greeted with a member of staff who did not acknowledge me in her front desk for some time. After acknowledging me in an empty lobby, she said I had to pay a deposit, taxes and breakfast. She also required proof I was related to my father, even though I had been added to the reservation already. She was untrained and unable to explain why I had to pay a breakfast charge of 200 USD for my 9 day stay when I said I did not want breakfast. She said she had customers and asked me to leave the line, repeatedly asking if I could pay, when I had already said I was able to pay taxes and the deposit, but first would like her to explain to me what exactly I was paying for. Her english was painfully awful and after waiting for a good half hour she proceeded to have me check in, for her sake. Had the stay not been paid for already, I would have chosen anywhere but West All “Suites”. The room wasn’t a suite, as the bathroom was not adjacent to the bedroom. I found the room in a bad shape of wear and tear and not fantastic cleaning condition. Looks alright from the lobby, but don’t be fooled - the service and the quality for what you pay for aren’t worth the headache. Or your money.

I have read your feedback and I'm sorry regarding your dissapointment from the front desk.
I undestand that you are still at the hotel so I will be happy to meet you during breakfast.

Report response as inappropriateThank you. We appreciate your input.
This response is the subjective opinion of the management representative and not of TripAdvisor LLC.
View more reviews
PreviousNext
1…567…