$97
$64
View deal
Free cancellation until 12/18/21
Booking.com$77
Travelocity$82
travelup.com$97
View all 11 deals
Prices are the average nightly price provided by our partners and may not include all taxes and fees. Taxes and fees that are shown are estimates only. Please see our partners for more details.
Thomas N
Singapore
2

Recommended for vacation as its walking distance to MBK. Staff and front desk are really helpful and patient with our enquiry.only thing is this hotel lobby are not facing directly at the main road which you may need to focus on the signboard.overall good facility and thumbs up for the great staff.

Trip type: Traveled as a couple
Review collected in partnership with Cancelon.com
This business uses tools provided by Tripadvisor (or one of its official Review Collection Partners) to encourage and collect guest reviews, including this one.
See all 674 reviews
Nearby Hotels 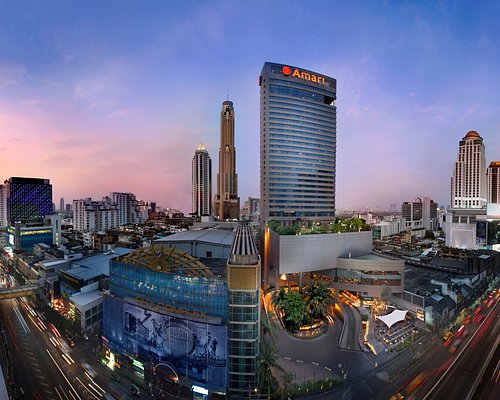 The Quarter Hualamphong By UHG
$19

The room was spacious. I liked the standalone bathtub that can easily be concealed by the sliding door. Check in and check out was easy. We couldn't hear any traffic like previously mentioned by some other guests. Breakfast was quite limited but enough to keep us going before we head out to explore and experience the many food options in Bangkok. Despite checking out 12noon and not flying out til late evening, the hotel allowed to leave our bags at the concierge (which is pretty standard I suppose), they also allowed us to use the pool shower to freshen up before we head out to the airport. The swimming pool is pretty small but didn't stop me from doing my laps. Overall a nice experience. Location definitely wins some points as this hotel is very near to major malls and public transport.

This review is the subjective opinion of a Tripadvisor member and not of TripAdvisor LLC.
papagreko
Singapore, Singapore
3727
Reviewed May 20, 2019 via mobile
Terrible treatment and 0 service recovery

I waited a few months before I wrote this, wanting to give the hotel a chance to make up for their terrible showing of customer service... to no avail. Making matters worse while they acknowledged and promised to make up they never did!

We booked the hotel through Agoda, for my wife to recover a few days following surgery in Bangkok. We had been to Hua Chang a few times and despite their terrible WiFi, non existent pool and mediocre breakfast we liked the room and wanted to go back considering we would be mostly indoors.
We arrived and the hotel refused to honour our confirmed reservation stating they had no more deluxe rooms and asked us to go elsewhere! With a sick wife and without any wrong doing on my side, I refused to give in. Front desk manager mr Paisan or “Bank” despite admitting they had a suite available they did not chose to upgrade us (“upgrades are the discretion of the hotel”); despite us being multiple returning customers...
Long story short, we wasted 70 min in their lobby, stressed and frustrated, they asked me to call agoda (and suffered roaming charges) without even offering us a bottle of water all this time! Completely inconsiderate, with a sick customer, rude and unwilling to help. Finally they chose to upgrade someone else as magically they found a deluxe room... not a single apology or offering.

Weeks later director of sales (Isaraphong Tanaputhi) apologised, committed to make it up next time and when we called in for it he never did stick to it! extraordinairy.

This review is the subjective opinion of a Tripadvisor member and not of TripAdvisor LLC.
WilliamChow
Hong Kong, null, Hong Kong
31
Reviewed May 9, 2019 via mobile
Very nice hotel...

佈置和服務很好。地点很好，就在Bts 附近。走路也不用5分钟。只是泳池太小，日光浴的地方不多。超赞的是他們的員工和房間設計的心思。The hotel decor is great and the staff are very nice. I arrived in the early morning, 1:30, but the staff on shift is very helpful. The check in process was quick and leaded me to my room by a very handsome gentleman. The room decor is as what it is in their album. The room is nice and clean. And they send me a birthday blessing even though i was not mentioned. It is so heart touching.

This review is the subjective opinion of a Tripadvisor member and not of TripAdvisor LLC.
sunbeamrn
Singapore, Singapore
11493
Reviewed May 8, 2019
Still as good

After 1 year, I visited Hua Chang again. But since it the Songkran period, I saw that all the normal rooms were booked.

I wrote to the Hotel and quoted my last booking number and the Hotel gave me an offer better then what I would get from all the booking web site.

The room was still as big and well maintained. The room I had wifi was not that good, but the size of the room and the comfortable bed made up for wifi.

Still a short walk to most places I want to go and still quiet enough for nights of good sleep.

I will be back again to Hua Chang. I am a very happy customer.

This review is the subjective opinion of a Tripadvisor member and not of TripAdvisor LLC.
O2032YZ_
Pattaya, Thailand
3
Reviewed April 28, 2019 via mobile
Very nice hotel

Its first hotel in Bangkok that I really like.
Quite and clean.
I like a staff at restaurant, she has short hair. Very nice to care of me. But at front desk they are not smile. The bellboy nice too.come fast to help me open the door.
I may back to stay here again in next trip. thank you.