When 4 of us arrived on Khao Sao at 3.30am after a long bus/ferry ride, all we need is a cozy and clean bed and this hostel definitely surprised us--it's so cool to be in this cabinet room where you got your privacy and coziness. Well--truely that it's a bit harder to mingle with ppl but still, the comfort will make you so happy and peaceful and the cleaness is definitely above the thai-average standard. It was still easy to share your travel stories with backpackers in the hall during the free breaky session after a nice hot shower--which you would have barely any chance to get once you are off to the islands in Thailand--so please enjoy it :)
Ps: the staff at the receptionist was extremely patient and helpful to help me and my friend--who look apparently like TOURISTs as you might be---to get a metered taxi --we do appreciate it a lot!
Definitely next time when i'm in Siam capital, i'll be back here again.It's slightly expensive,but well, it still worth it:))More

Show less
Room tip: Ask the counter to turn up the temperature in the room---it was freezing inside wheareas outside on the street was 30 degrees above :/
See all 430 reviews
Nearby Hotels 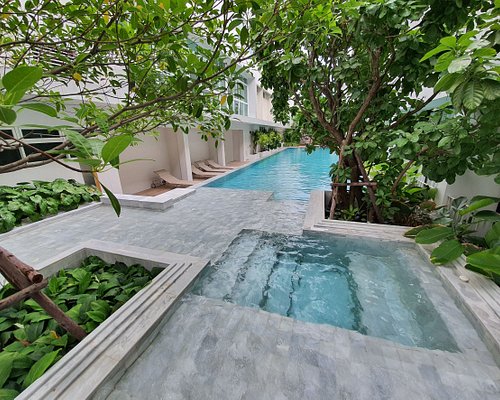 The Quarter Ladprao by UHG
$46

This is a nice idea, and when I arrived at this hostel I thought WOW. The pod's remove any of the awkwardness associated with sharing a room with lots of other people..

HOWEVER, this place was always dead. Unlike other hostels there was little hanging about, meeting other people. The pod's removed any need for communication.

The pod's were, for the most part well executed - but a little shabby.

Depending on what you want from a hostel I say YES... If you are doing a one night stop get in get out its a fun experience, if not a little pricey.

If you looking to make pals etc its probably not the place for you...

This review is the subjective opinion of a Tripadvisor member and not of TripAdvisor LLC.
bobbiee26
Sydney, Australia
3246
Reviewed December 22, 2012
Good choice for Khao San Road

Stayed here whilst traveling solo. Was able to check in at midnight since my flight arrived late at night, as well as check out at 3am for an early flight, even though the reception is not 24 hours there is a bell you can ring so they will come and let you in as some of them live on site.

Overall I would have to say that this is a fantastic choice if you want to be close to Khao San Road (about 5 minute walk) but not so close that it's noisy at night. The rate is probably a little more expensive than most of the other hostels you would find in Bangkok but I think it's worth it - you get the privacy of your own little pod but are still able to meet and talk to others.

I was surprised when some reviewers said they got really hot at night because of the pods - basically you slide your pod door according to how much air/privacy you want when you are sleeping...but I found the air conditioning so powerful that I was freezing and had to slide the door all the way shut! They have 2 massive air conditioners just to cool down the whole room, so it is very cold inside - which is nice after a day outside in the humidity. Feeling stuffy and warm in my pod definitely wasn't an issue for me.

And the best thing about the pods - during the day just lift your backpack into your pod, slide the door shut and lock it - very secure. The pods come in 2 rows, so it's probably easier if you had a pod on the bottom row rather than the top row (where you have to climb a short ladder of about 4 steps to get in)

Good fast wifi as well as a couple of laptops you can use in the lobby.

The only thing about this place I didn't like was that in the morning, down in the lobby (where you eat breakfast) I seemed to have been bitten many times by mosquitoes, so there must've been an opening there somewhere. The rooms were fine though.

Definitely a place I would recommend for solo travelers who would like to be close to Khao San road, looking for a safe, clean place to sleep.

This review is the subjective opinion of a Tripadvisor member and not of TripAdvisor LLC.
luggage_of_lars
London, United Kingdom
5320
Reviewed November 26, 2012 via mobile
Good location, friendly staff and well maintained

Spent 2 nights at this hostel and was really satisfied.

- friendly and helpful staff who are willing to explain you how to get anywhere
- I arrived at 11 because of an early flight but could already check in which was grear as I was really tired
-very fast wifi connection!
-great location near khao san road but away from the noise
-even though its not located in the center of Bangkok it is located near all main tourist attractions like Wat Arun, the great palace & wat pho
-breakfast is simple but for me toast and tea is a perfect breakfast
-easy to meet new people in the dorm rooms

only improvement thing I would give would be adding clothing hooks to the shower as hanging your clothing is not too easy now.

Overall great hostel and would definitely recommend to anyone especially if you are travelling alone and are looking for new people to have fun with!

This review is the subjective opinion of a Tripadvisor member and not of TripAdvisor LLC.
Eldy_86
Kuala Lumpur, Malaysia
1
Reviewed November 20, 2012
Strategic place, very good staff and clean place.

I stayed this hostel for 4 nights as been recommended by Canary Travels Bangkok (Ms. Chan) and I really enjoyed and felt been welcome for this hostel. They have a great and helpful staff(T & Cathy which help to get direction and places to visit in BKK). Location was really strategic which I only need to walk few minutes to have my meals and to get some relaxation(massage) at Khao San Road. I guess food and massage was not expensive compare to other places and its suit to backpacker and budget traveller like me. Though the breakfast was just toast of bread and some coffee, tea and orange juice..I also can grab some street food outside from this hostel.
Even its far a bit from the city but I do believe take a bus its reliable as I saw so many backpackers stay here and take a bus to access to the city and they also taking boat (just a bit walk and can reach to Banglampoo pier).
I will come again to stayed here but its good if Suneta can build extra double room for couples as I felt that its more save in terms of price for those budget traveller:)
Overall I am very happy and satisfied with the service and their place.

This review is the subjective opinion of a Tripadvisor member and not of TripAdvisor LLC.
Siv369
Johor Bahru, Malaysia
57
Reviewed November 16, 2012
Good place to stay...

The hostel is bit creative, fabricated with just wooden materials in all places. The staff was friendly and the services were good. But I did not enjoy the pod beds, as I woke up alarmed in the mid of the night, suffocating for air with no windows & no light inside. In future, I will think twice before choosing to stay in a pod bed hostel.

This review is the subjective opinion of a Tripadvisor member and not of TripAdvisor LLC.
View more reviews
PreviousNext
1…454647…