Looking for a simple, quiet, but great... - Jam Hostel Bangkok

$22
View deal
$22
$19
View deal
Expedia.com
Hotels.com
Travelocity
View all 10 deals
Prices are the average nightly price provided by our partners and may not include all taxes and fees. Taxes and fees that are shown are estimates only. Please see our partners for more details.
Dalyn S
Bangkok, Thailand
3278

I usually stay at fairly expensive hotels and guest houses in Bangkok because for the rest of the year I stay in small towns and villages helping our with various educational projects. This time I just wanted to try something new so I checked into the Fortville Guesthouse. It is a short walk to museums, Khaosan, great restaurants, Jazz Happens, boutique stores. Fortville was mostly young and older people (Thais and International) who enjoyed travel and respected Thai ways. The night music and food, not to mention the view on the top floor was spectacular. My room had a fridg, tv, aircon, clean great shower, balcony overlooking the canal. There was wifi in room and also throughout the hotel and coffee cafe. Besides the other travellers, the staff was friendly and helpful. They can even help you learn some Thai! I will definitely return.More

Show less
Room tip: Go across the road and you will find all kinds of restaurants. If you go out and to your right you will go over a small bridge and find a place to take Thai cooking classes. Quiet rooms on canal side, 3rd floor was nice.
See all 280 reviews
Nearby Hotels 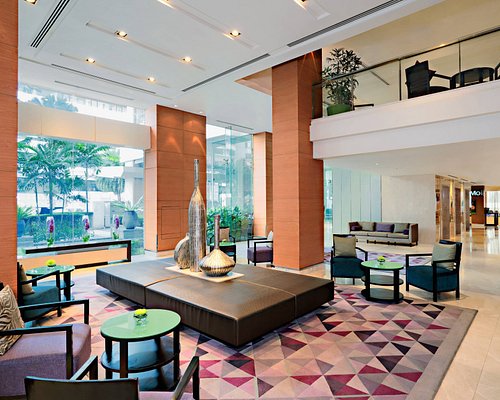 The Quarter Ladprao by UHG
$27

LIKE:
1) I like the sweet and charming receptionist (a chinese pretty lady). She is so helpful and pleasant.
2) The design/style of the hotel is special (that's why it is named as fortville). They have a very special lift
3) It is located near to Kao Shan road (still need to walk around 10 - 15min to reach) and is very near to Phra Arthih Pier (for daily pass boat tour)
4) Have a few eating places (road side stall/restaurant/cafe) nearby. Try the chicken rice stall at the opposite left across the road and mixed rice stall at the left of hotel. One 7-11 beside the hotel and one at the opposite
5) quiet and comfortable

DISLIKE
1) TV is too small and too high
2) No swimming pool (unlike the hotel next door)
3) limited usage of wifi. Poor wifi network in the room
4) water from shower is too scatter , difficult to bath
5) no sufficient space for big luggage
6) no nice view from hotel room
7) rooftop cafe price is slightly high

Overall : Not bad to stay there again

This review is the subjective opinion of a Tripadvisor member and not of TripAdvisor LLC.
Charles H
London, United Kingdom
1210
Reviewed July 3, 2012
Brilliant, but let down by cigarette smoke passing between rooms

Fortville is really quite brilliant, it is built in the style of a thai fort and is in keeping with the road on which it is situated, Thanon Phra Sumen. This road has ruins of an old city wall running along it, as well as a real fort which is just near Fortville Gueshouse. The theme continues in the rooms, which feel almost like prison cells in a quirky and likeable way.

The rooms are not that big, but they are very clean, comfortable and nicely appointed. The TV's however are a bit small and if i were the management this would be an upgrade priority.

There is free wifi at the hotel - you need to access this with a username and password from reception. The wifi was not always reliable, but connection speeds were good when it was on.

If you stay make sure you check out the rooftop restaurant, its really beautiful up there in the evenings and has unparalled views for a hotel in the Khaosan area.

There are two 7-11 stores right next to the hotel - always handy to have around! ;)

The staff at Fortville are generally friendly, although at times it would be nicer if some of them were more talkative.

The only problem i had at Fortville was Cigarette smoke coming into my room through the air conditioner. I think officially its a non smoking hotel, but there seem to be rampant smoking taking place and my room had smoke coming into it on most nights. Turning off the air con stopped it, but then was really hot!! I think the management should be proactive about the smoking status of the hotel, so that smokers and non smokers both know where they stand.

Some minor issues, no hand soap provided and no privacy door tag to hang on the door.

Room tip: Rooms towards the back are a bit quieter. The rooftop restaurant is open till 1am so rooms on a lower floor will be further away from the music in the restaurant.
Ask Charles H about Jam Hostel Bangkok
1  Thank Charles H

This review is the subjective opinion of a Tripadvisor member and not of TripAdvisor LLC.
GlobalGoose
Tbilisi, Georgia
1320
Reviewed July 1, 2012
Nice Clean Place

We stayed at the Fortville for 2 nights. The rooms were quite compact but very clean. The bed was very low and hard but I actually loved sleeping on it. We could connect to the wifi in the cafe from our room but it did not always work.

The cafe downstairs was really good food but perhaps more expensive than some places in Bangkok (still really cheap). There was 2 7-Elevens within 15 feet and the rooftop bar was nice to sit out in the evening.

The location is really good, close enough for the hustle and bustle of Khao San, but far enough away so you do not get the noise.

Overall we really enjoyed our stay but felt for the rooms were just a little overpriced in comparison to others in the area.

This review is the subjective opinion of a Tripadvisor member and not of TripAdvisor LLC.
AOByrne
Dublin, Ireland
6933
Reviewed June 27, 2012
Great location

I stayed here for two nights. The room was plain but very clean. There was no wifi connection in our room and we had to use the wifi in the cafe downstairs, I'm not sure if this is true of all the rooms. The guesthouse is very well located about a 10 min walk from Koh San Road and just under 10 min from the river ferry.

This review is the subjective opinion of a Tripadvisor member and not of TripAdvisor LLC.
yukiyou88
15
Reviewed June 27, 2012
Awesome design

We stayed there for a night n it left us wit a good impression, nice hotel in a great area near to bars n restaurant, near grand palace n wat arun. Clean room wit a great service. Def will stay here next time.