CheapTickets
Expedia.com
Snaptravel
View all 8 deals
Prices are the average nightly price provided by our partners and may not include all taxes and fees. Taxes and fees that are shown are estimates only. Please see our partners for more details.
Traveler5548
Clearwater, Florida
254308

We arrived at the end of May and did not notice any renovation. The staff was very nice, the room was clean and everything worked, including the internet, which was fast enough to do Skype to the U.S. Because we do a lot of travel to remote places, a hotel that does all the basics well is appreciated. We would reccommend the Hotel Pedling

Room tip: No elevator, so if you are not used to climbing at altitude, a lower floor might be for you
See all 215 reviews
Nearby Hotels 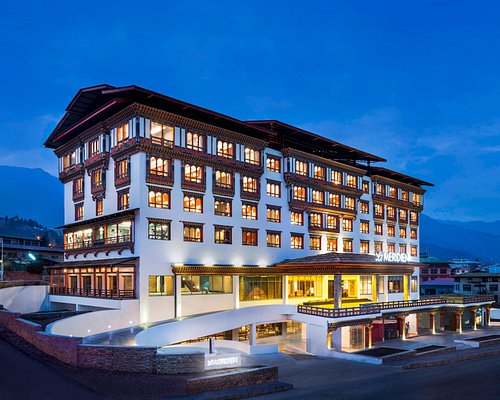 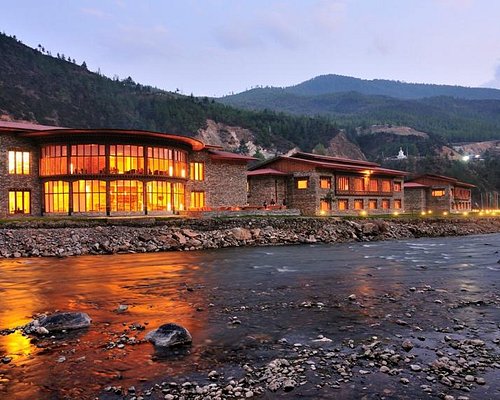 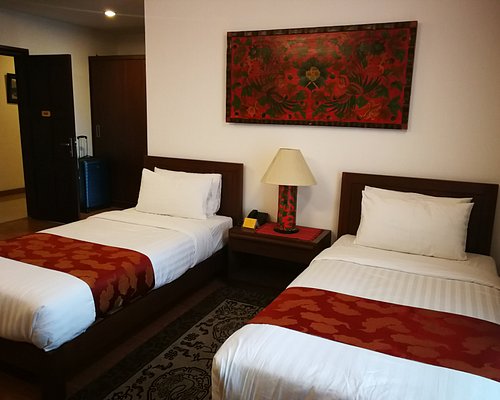 Pedling was undergoing renovations when I stayed there and is looking great - clean, modern, and comfortable. The food was excellent in the restaurant in the basement, and overall it was a great value.

Unfortunately, the management was not honest with me when I repeatedly confirmed that there would be internet, and later refused to own up to it. I was really hoping this would be my go-to place when in Thimphu, but as I need internet for work and I can't trust their word prior to check-in that it will be provided, I can't take the risk.

As others have mentioned, the shower is set up in such a way that you have to get into the tub and stand under the shower head when turning on the water, thus guaranteeing being soaked by cold water. Also, there is a "lip" on some of the steps in the stairway which caused me to trip and bruise myself on the hard marble. That may be what caused others to trip as well.

Room tip: If renovations are still going on, ask to see the room in advance to make sure you're not in a noisy location. Also, test the internet, hot water, etc in the room before confirming.
Ask B T about Pedling Hotel & Spa
1  Thank B T

This review is the subjective opinion of a Tripadvisor member and not of TripAdvisor LLC.
Victoria900
Singapore, Singapore
148104
Reviewed December 31, 2011
this hotel needs lots of upgrading.

The hotel has no lift and the 13 of us, including 2 grandmothers, had to climb the steps to get to the top floor. What made the climbing worse was the uneven heights of the steps that caused our young nephew to fall and another middle-aged brother to trip.

The bathroom shower head and taps positions were poorly designed that one had to stretch far back beyond the shower head to turn on water. The hot water in the shower room was insufficient too.

Although it is well-located in Thimpu, there were lots of dogs barking in the night and vehicles moving in front of it.

There was only one plug socket in the room for the heater, making it difficult to move the heater around to maximise heating of the room.

The hotel is also undergoing renovation from now till March 2012. Hope they are making improvements to the above. We were disappointed with Druk Expedition for making this hotel arrangement, although it was just for one night.

This review is the subjective opinion of a Tripadvisor member and not of TripAdvisor LLC.
islandloverBrisbane
Brisbane
1912
Reviewed November 9, 2011
Good location, helpful staff, tasty food.

Although undergoing renovation, the hotel provided a quiet, comfy, spacious room with a pleasant view. It is very convenient to the shopping area. Free access to the internet was a big plus. Meals were varied and tasty and the staff delivered the extras we asked for. The only downside was the noise during the night: being a light sleeper the roaming, barking dog packs woke me a few times - but this is a feature of urban Bhutan!

This review is the subjective opinion of a Tripadvisor member and not of TripAdvisor LLC.
jyothimc
Auckland, New Zealand
149
Reviewed September 10, 2011
Nice hotel, friendly and helpful staff

We stayed here for 2 nights, unfortunately falling over the weekend. That means we had to face the neighbouring bar lounge music. Apart from that, the room heating is good, loads of channels on television and the bed is good. The location is right in the heart of thimphu so you get to go around on your own. The toilet is a bit small and congested and no mug nor bucket available which can be a hindrance for Indians ( I hope you know what I mean :)). Food is good. Barely hits the 3* mark though.

Room tip: If travelling on a weekend, request for rooms on the Swiss Bakery side - may be that will help
Ask jyothimc about Pedling Hotel & Spa
Thank jyothimc

This review is the subjective opinion of a Tripadvisor member and not of TripAdvisor LLC.
234270394
Copenhagen, Denmark
3034
Reviewed September 3, 2011
Good location, decent hotel

As the other reviewers mentioned, this place is right in the middle of Thimphu. I stayed here once and it's a decent place. The staff were great. The rooms could use improvements, but it's o.k.

Greetings from Hotel Peding. I would like to thank you for your review. We are new to Trip Advisor- and this is our first response to our guest comments.

Thank you for visiting us and for the lovely comment.I will pass on your comments to the staff who always like to hear feedback.

I am glad to know that you were happy with our services.we are currently under going major renovation/up-gradation- on the rooms, we are relocating the restaurant on the ground floor ,building a separate bar and we are building a Spa and fitness center.

With the completion of up-gradation and renovation- our hope and mission is to provide excellent guest service and exceed our guest expectations by making them truly happy in the land of Gross National Happiness.

Hence, i hope you will continue using our services and facilities on your next visit to Bhutan.

Report response as inappropriateThank you. We appreciate your input.
This response is the subjective opinion of the management representative and not of TripAdvisor LLC.
View more reviews
PreviousNext
1…282930…
<script type='text/javascript' crossorigin='anonymous' async o