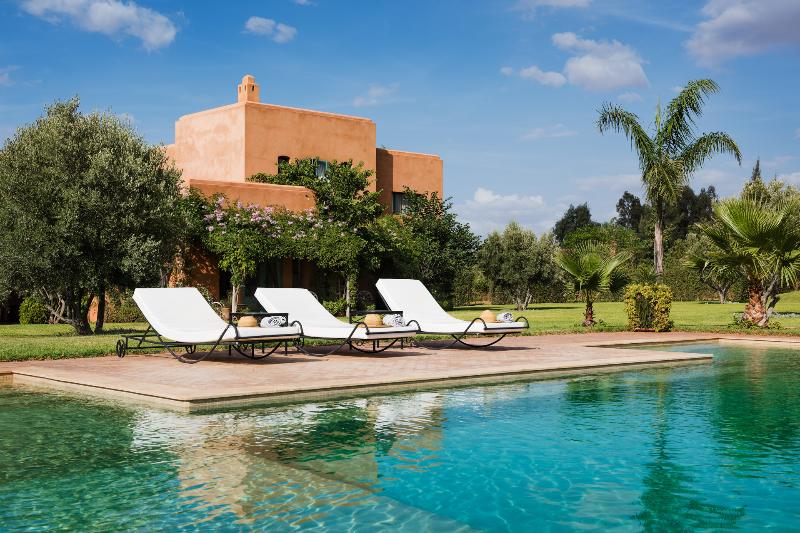 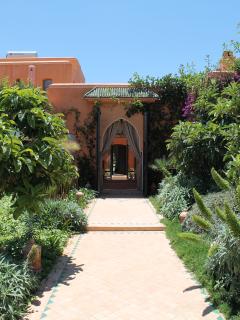 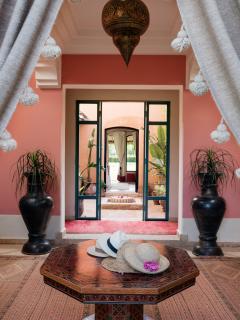 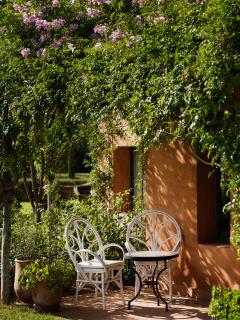 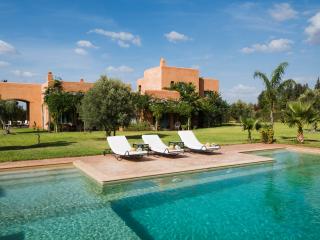 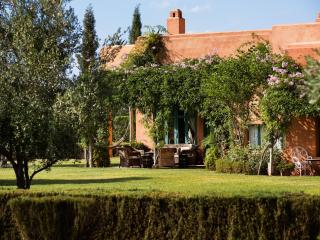 Excellent - based on 23 reviews
Write a Review

Beautifully decorated house set in wonderful expansive gardens. All bedrooms are ensuite and secluded and wonderfully comfortable. Staff are very attentive but unobtrusive. Pool and lots of games to keep the young (at heart) entertained - tennis, volley ball, table tennis, boules. Evening cocktails on the roof terrace over looking the Atlas mountains a definite highlight. Easy to get into town and equally easy to get into the foothills of the Atlas to walk and explore. The perfect escape.

Date of stay: May 2016
Traveling group: Friends
Would you recommend this hotel to a friend?   Yes.
Recommended for:
Was this review helpful? Yes
This review is the subjective opinion of a TripAdvisor member and not of TripAdvisor LLC.
Problem with this review? Thank you. We appreciate your input.

28 helpful votes
“Wonderful long weekend exploring Marrakech and The Atlas”
Reviewed May 31, 2016 for a stay in May 2016

Returning once again to Dar Tigamino, we spent a long weekend exploring up into the Atlas Mountains and around Marrakech.

The garden was looking beautiful, the weather was perfect and we were served delicious food by the cook.

The villa worked perfectly to use as a base for exploring as well as the few days we had lazying around by the pool and enjoying sunset drinks on the roof.

Date of stay: May 2016
Traveling group: Spouse/Partner
Would you recommend this hotel to a friend?   Yes.
Recommended for:
Was this review helpful? Yes
This review is the subjective opinion of a TripAdvisor member and not of TripAdvisor LLC.
What a wonderful time you seem to have had. I understand that our Concierge arranged several trips for you into the mountains and Marrakech. Mustapha is a master at getting it 'Right.' Dar Tigamino was thrilled to have you back and we look forward to seeing you again hopefully!
This response is the subjective opinion of the management representative and not of TripAdvisor LLC.
Problem with this review? Thank you. We appreciate your input.

I had such a fantastic time with my family and friends; playing golf, tennis and larking about! i would have no trouble in recommending this amazing house to absolutely everyone!!!

Date of stay: July 2015
Liked best: The unbelievable view
Liked least: at times in the day the 38-40 degree temperature was to much for me, but perfect for my friends and family
Traveling group: Teenagers
Would you recommend this hotel to a friend?   Yes.
Recommended for:
Was this review helpful? Yes
This review is the subjective opinion of a TripAdvisor member and not of TripAdvisor LLC.
Hugo... It is wonderful that you had a great time. Thank you for writing a review. It is lovely to hear from the younger generation. I wish you many more Happy Holidays at Dar Tigamino.
This response is the subjective opinion of the management representative and not of TripAdvisor LLC.
Problem with this review? Thank you. We appreciate your input.

We were a group of 8 looking for a sunny break away from England’s temperamental weather pattern and some peace, comfort and good food. Dar Tigamino was suggested by some friends and wow! – what a treat it was. Situated a mere 30 mins away from the bustle of Marrakesh, secure behind a wall and with security staff that act for the estate of 8 luxury houses, the peace was deafening! Not a squeak from the neighbours – only the cacophony of bird song to welcome in the new day conducted by the ever elusive Hoopoe. The several acres of garden have been beautifully designed and host a number of bird species and masses of colour. Secluded arbours and walkways connect fountains to boule pitch to volleyball/badminton court to swimming pool with its own dining area, a wide selection of seating and lying options - beanbags, beds, chairs and straw hats all of which were carefully lined up each morning as if on parade.
The house was as comfortable as they come with each suite of rooms having separate and secluded access to the garden and sitting out areas. We could be as social or private as we wanted. The internal decoration was exceptional, with its paintings and objets d’art guaranteed to cause one to dally in transit.
We made use of the communal tennis court on a regular basis (racquets and balls all laid on) and some even succumbed to a massage at the hands of the Soumaya, an attractive student from the city, in the purpose built gym and massage parlour.
And then there were the staff – an embodiment of the sunny and welcoming climate. Led by Asma, her sister Kalima, cook Sana, gardener Ismail, there was no request too difficult or trying at any time of day or night – they apparently lived on site. Having daily visits from Mr Fix-it – Mustapha – to whom English seemed to be his first tongue - taxis, tips, trips and problems were all sorted with ease.
Dar Tig’s location away from, but in striking distance of, Marrakesh, and on the approaches to the Atlas was a definite bonus. The highlights of the city could, I felt, be covered by 2 half day trips after which the call of the pool became the more alluring. Within 10 mins drive was Gmate the site of the former regional capital, swept away by a flood in AD 1058 and reinstated as Marrakesh; the village of Ourika; the Anima gardens, recently opened, and designed to surpass the Majorelle. Walks to waterfalls and a trip to the foothills of Jebel Toubkal still call for longer drives but the Ourika taxi rates seem to be more competitive than their city equivalents.
And then there was the cuisine – our one outing to dinner in Marrakesh was disappointing in comparison to the dishes that Sana regularly produced for us. No self-catering chores to perform – we gave her free range to choose the menus which were varied, as Moroccan as you could get, or European, and in portions relevant to the exercise taken during the day. As tempting as the hotels in Marrakech might seem, Dar Tigamino - ‘My Home’ in the Berber language – made us all envious that it was not our own.

Date of stay: April 2016
Liked best: The Surroundings
Liked least: Driving away from the premises
Traveling group: Friends
Would you recommend this hotel to a friend?   Yes.
Recommended for:
Was this review helpful? Yes
This review is the subjective opinion of a TripAdvisor member and not of TripAdvisor LLC.
Wow... Thank you. We look forward to seeing you again one day.
This response is the subjective opinion of the management representative and not of TripAdvisor LLC.
Problem with this review? Thank you. We appreciate your input.

The house is wonderful so comfortable and full of beautiful pictures and furniture. All bedrooms and bathrooms exceed expectation. The staff are friendly efficient helpful and discreet. Food delicious and not over powering. Beautiful gardens and views of the Atlas Mountains superb. We played tennis, boule and basketball, sunbathed and swam ventured out occasionally, and had wonderful relaxing week. Cannot recommend too highly.

Date of stay: April 2016
Liked best: Feeling of home from home in lovely English summer weather hot in sun, cool at night.
Liked least: Leaving!
Traveling group: Friends
Would you recommend this hotel to a friend?   Yes.
Recommended for:
Was this review helpful? Yes
This review is the subjective opinion of a TripAdvisor member and not of TripAdvisor LLC.
Thank you for your kind words. We listen to everything you have to say and hope that we can carry on improving our guests experience. We are looking to achieve a 5* service and we look as though we have achieved this with your party. We look forward to your return visit one day.
This response is the subjective opinion of the management representative and not of TripAdvisor LLC.
Problem with this review? Thank you. We appreciate your input.

We had the most wonderful week in this gorgeous house. We were so well looked after by all involved with the management of the property from the minute we walked into the Arrivals hall until we went through to Departures. The house is very comfortable and beautifully designed as is the garden and pool area and the food that was produced by the lovely cook and her team was consistently delicious. We organized with Mustapha to go into Marrakech one evening and then to go up to the stunning Kasbah Bab Ourika for lunch (highly recommended) and all went smoothly as ever. Nothing was too much trouble. Otherwise we simply stayed by the lovely pool relaxing and soaked up the atmosphere and scenery. Drinks on the roof terrace were memorable. All in all it was utterly perfect and we will be back.

Date of stay: June 2015
Liked best: Absolutely everything
Liked least: Nothing
Traveling group: Friends
Would you recommend this hotel to a friend?   Yes.
Recommended for:
Was this review helpful? Yes
This review is the subjective opinion of a TripAdvisor member and not of TripAdvisor LLC.
Problem with this review? Thank you. We appreciate your input.

I couldn't have loved our week-long stay at Dar Tigamino more - a wonderful house in a perfect location.

Getting there couldn't have been easier - a mere half an hour from the airport after a short flight, we were met by the super-organised and very friendly Mustapha who ensured all our plans were arranged in advance and meant that activities happened seamlessly, and made the overall stay relaxed, enjoyable and effortless.

The house was fantastic, with every mod-con one would need on holiday - comfortable, very spacious and authentically-decorated.

Being cooked for was a major bonus - delicious breakfasts, lunches and authentic Moroccan suppers - extremely reasonably-priced and excellent quality with very friendly staff who went out of their way to make sure we had everything we needed.

We sampled the delights of trekking in the Atlas mountains with a guide, the Medina, a few lunches and suppers out in the nearby Marrakesh - but when one has such wonderful surroundings of Dar Tigamino, we spent most of our time relaxing by the pool, evening drinks on the rooftop and even using the gym for the more motivated guests!

A heavenly week - amazing value for a truly luxurious holiday. Thank you for having us!

Date of stay: June 2015
Liked best: The house itself
Liked least: Slightly temperamental Wifi - but hardly an issue!
Traveling group: Friends
Would you recommend this hotel to a friend?   Yes.
Recommended for:
Was this review helpful? Yes
This review is the subjective opinion of a TripAdvisor member and not of TripAdvisor LLC.
Problem with this review? Thank you. We appreciate your input.
Previous Next
1 2 3 4
Updating list...
Do you own a vacation rental? List it here.

Looking for a place to stay in Marrakech?
View all 1,119 vacation rentals