Portuguese pleasure at the Casa do... - Casa do Brasao

Review of Casa do Brasao 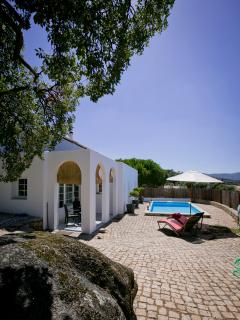 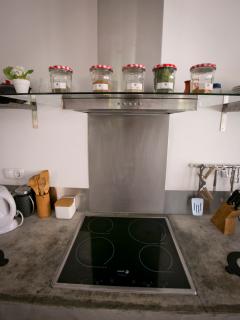 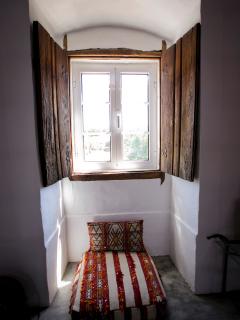 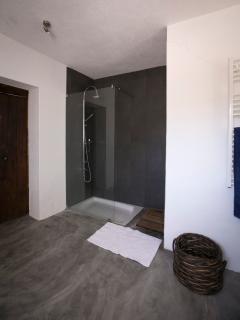 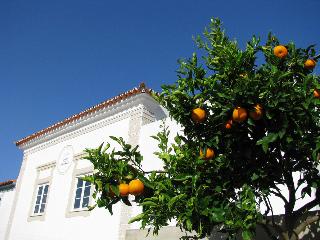 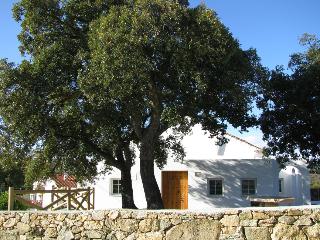 Very good - based on 12 reviews
Write a Review

Casa do Brasão is on the edge of Barretos, a tiny village in the north east of the Alentejo province of Portugal close to the Portuguese-Spanish border. The scenery is amazing: rugged, sunbaked, with vast numbers of cork oaks and liberally sprinkled with dolmens (anta in Portuguese), those mysterious edifices from ancient times. All this under an immense, azure blue sky. Now, back to the present. Casa do Brasão is comfortable, with stone floors and shuttered windows that make it a cool, welcoming refuge from the heat of the Portuguese summer. Of course, the plunge pool outside is a very inviting alternative way to keep cool and refreshed. We are keen cooks and so the kitchen is important to us. The kitchen at Casa do Brasão is quite large with a central island table that is ideal for meals. It is well equipped with plenty of bench space for food preparation, a microwave, an electric oven, a four burner induction cooktop and a large refrigerator. The Wi-Fi router is also in the kitchen. The lounge is comfortably furnished with a large, wall mounted flat screen TV. The two downstairs bedrooms (the “Blue Room” and the “Red Room”) are well furnished and quite spacious. We used the third bedroom, which is on the mezzanine level. This room is reached by a short and rather steep, climb up an open staircase. But this short climb is well worth it as the room is so spacious, so light from the velux windows in the roof and with such a large and comfortable bed The bathroom is also very spacious with a most impressive shower. The garden is rather rocky but well shaded by mature cork oak trees and with a shaded stone bench that is absolutely ideal for a leisurely breakfast. There is on site parking for one car but two cars could be parked without too much difficulty. Although Barretos itself has no shops, there are plenty available within a very short drive and as the roads are amazingly quiet, driving is exceptionally pleasant. There are also good restaurants within easy reach as is the magnificent Marvão perched high above the valley and with breathtaking views. We went to Marvão early in the morning and explored this amazing town when all was quiet. Although Marvão is such a well known attraction (hence the advisability of an early morning visit) there are many towns, monasteries, convents and a veritable panoply of other attractions to visit within easy reach of Casa do Brasão. Other things we particularly liked were the lack of tourists in the area, the location of Casa do Brasão and especially, its cool comfortable interior. We did however encounter a problem when we first arrived as the key was not where we had expected to find it nor could we find it after a rather frantic search of other places we thought it could be. Fortunately after a call to the owner (who was not close by on that day) and a wait of about an hour, a key was delivered. It is fair to say the absence of the key was not at all the fault of the owner who was extremely apologetic and offered to treat us to a meal at a local restaurant We accepted that offer and had a splendid meal plus wine at no charge. This more than offset the delay in settling in. Finally, remember the time in Portugal is an hour behind Spain and indeed most of the other nearby countries. We had driven to Casa do Brasão from Spain and had no idea this was so. We arrived at the restaurant at 8.30 pm which we thought suitably late to dine. However to our surprise the cooks were having their meal, at a long table by the river, with no other customers in sight. It wasn’t until well into the next day that we discovered we had in fact got there at 7.30 pm which in Portugal is an almost unheard of early time to eat. Would we go back to Casa do Brasão? Definitely.

Date of stay: June 2013
Liked best: Location, plunge pool and cool comfortable accommodation
Liked least: Problem with the key (But this was due to an error by the cleaner not the owner}
Traveling group: Spouse/Partner
Would you recommend this hotel to a friend?   Yes.
Recommended for:
Was this review helpful? Yes
This review is the subjective opinion of a TripAdvisor member and not of TripAdvisor LLC.
Problem with this review? Thank you. We appreciate your input.

1 review
“Wonderful relaxing base from which to explore the Serra de Sao Mamede National Park”
Reviewed August 6, 2012 for a stay in June 2012

This is a great house, full of character with all amenities and great sunsets. Ideal base for just walking out the door into the surrounding countryside. Not too far from nearby towns of Beira, Marvao and Castelo de Vide.

Date of stay: June 2012
Traveling group: Spouse/Partner
Your age range 50-64
Would you recommend this hotel to a friend?   Yes.
Recommended for:
Was this review helpful? Yes
This review is the subjective opinion of a TripAdvisor member and not of TripAdvisor LLC.
Problem with this review? Thank you. We appreciate your input.

Reviewed May 25, 2012 for a stay in May 2012
1
person found this review helpful
Date of stay: May 2012
Liked best: The location and quiet atmosphere.
Liked least: The weather, but who can do anything about that!
Traveling group: With Friends
Would you recommend this hotel to a friend?   Yes.
Recommended for:
Was this review helpful? Yes
This review is the subjective opinion of an individual traveler and not of TripAdvisor LLC nor of its partners.
Problem with this review? Thank you. We appreciate your input.
Previous Next
1 2 3
Updating list...
Do you own a vacation rental? List it here.

Looking for a place to stay in Barretos?
View all 3 vacation rentals