$61
$48
View deal
eDreams$61
ZenHotels.com$51
Expedia.com
View all 14 deals
Prices above are provided by partners for one room, with variable occupancy rules as provided by the property, and do not include all taxes and fees. Please see our partners for full details.
Ann572014
Bristol, United Kingdom
229110

Unfortunately, our first ensuite room was very small, with a window which wouldn't open and air con which didn't work. However, the girl on reception tried very hard to reduce the room temperature and make it habitable, without success, so she gave us a free upgrade to a larger room with air con, balcony and view, for the rest of our stay.More

Thank you so much for your feedback and we are delighted we managed to sort your stay out for you. Hope to see you again

Report response as inappropriateThank you. We appreciate your input.
This response is the subjective opinion of the management representative and not of TripAdvisor LLC.
See all 1,200 reviews
Nearby Hotels 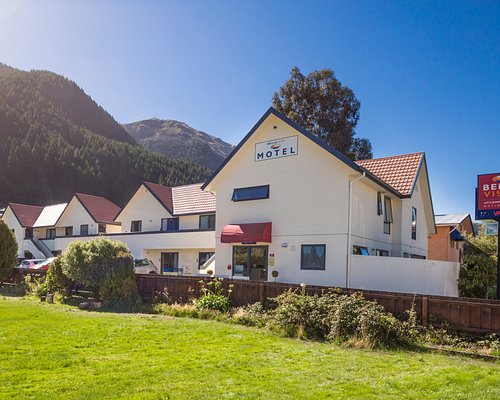 Hostel itself was better then most we've stayed at, location was excellent. Kitchen and rooms were larger then average and clean. Only downside was the smug member off staff down at reception, medium length blonde hair, awful banter verging on rude, after a long day of travelling neither me or my girlfriend appreciated his "humour"

Hey Jack
Thank you for your feedback. I apologise for that member of staff, he no longer works here.
We hope that if you come back to stay with us again that you will enjoy us second time round.
All the best with your future travels.
Thanks
Nomads Crew

Report response as inappropriateThank you. We appreciate your input.
This response is the subjective opinion of the management representative and not of TripAdvisor LLC.
ktraveller17
Wellington, New Zealand
388
Reviewed March 7, 2019 via mobile
Location and Tidy

Amazing location less than 100m to the lake and therefore about a max 2min walk to everywhere in the township. Room (King w/ en-suite) was basic, but clean, tidy and had all the amenities necessary for us. I was impressed and would stay here again for the price.

This review is the subjective opinion of a Tripadvisor member and not of TripAdvisor LLC.
Lesley M
Auckland Central, New Zealand
1196417
Reviewed March 6, 2019 via mobile
Location location location

Nomads is located right in town less than 100M from the lake and about 200 metres from the last stop on the airport bus route. Our double room with bathroom was great came with TV, a balcony (lake view) tea and coffee making facilities.
Large tour desk to arrange all your adventure sports and tourist attractions.
Again great location, busy, friendly place. 24 hour desk also a bonus.

This review is the subjective opinion of a Tripadvisor member and not of TripAdvisor LLC.
Kelsey S
103
Reviewed March 6, 2019 via mobile
Never again...

This hostel gave me a gross feeling from the beginning. The luggage storage smelling like serious funk was just a precursor to what the room smelled like. The hot, stuffy room smelled like a mix of BO and feet and without the option of opening a window. There were small, rickety, shoebox sized lockers in our room, shaky bunks, personal lights that didn’t work, and two plugs in the entire room. Because no one had lockers for their backpacks. Everyone’s things were piled up and strewn about. The bathroom in the room didn’t have soap and never did even after asking the front desk to fill it. Staff were friendly-ish..... I don’t envy their job, but asking them for help was pretty much a waste of time. Community bathrooms actually weren’t terrible and were probably the best part. And finally, I heard that NZ isn’t famous for their WiFi set up, so I’ll give them a break for this.... but spotty WiFi is only available in the lobby. You can pay for WiFi in the rooms apparently. I’ve seen a fair amount of hostels, good and bad.... but this one might be the worst. I dreaded going back to my room each night.

This review is the subjective opinion of a Tripadvisor member and not of TripAdvisor LLC.
ilovereggae
Auckland, New Zealand
7748
Reviewed March 1, 2019 via mobile
Good budget option

Hubby and I stayed 1 night before flying out - the price was right, location fantastic, we had an ensuite room at the front of the building on Level3 which had everything we needed.

We ended up getting charged twice ( Expedia and then Nomads by mistake), when I alerted front desk they immediately refunded it back to my cc.. so just be aware this might happen as they have a few new staff.

We stayed on a Tue night so the club music wasn't too bad, we actually slept exceptionally well. Not sure if I would stay Thu-Sat nights due to potential noise being in the heart of the township.