$86
$78
View deal
Free cancellation until 10/31/21
eDreams$86
Travelocity$78
Orbitz.com$78
View all 14 deals
Prices are the average nightly price provided by our partners and may not include all taxes and fees. Taxes and fees that are shown are estimates only. Please see our partners for more details.
wintersson
Noosa, Australia
32494

I have stayed here on many occasions when I travel to the Gold Coast with varying degrees of satisfaction. This time, however, the apartment was what I expected, clean well furnished, spacious and with great views. Being a Mantra member was also offered free wifi (although most hotels these days offer this), late check out (12 noon) and discount and free drinks vouchers which were useless for our stay as we stayed on a Sunday when the bars and restaurants are closed.

However, still a very nice stay and would recommend this establishment, especially for families.More

Thanks for choosing to stay with us here at Mantra Sun City once again for your Gold Coast Visit.

We certainly appreciate your custom and look forward to welcoming you back for future visits.

Very pleased you enjoyed your Mantra + benefits, however sorry due to operational hours you weren't able to utilize the Food and Beverage discounts, make sure you hang onto them for future use.

Report response as inappropriateThank you. We appreciate your input.
This response is the subjective opinion of the management representative and not of TripAdvisor LLC.
See all 3,059 reviews
Nearby Hotels 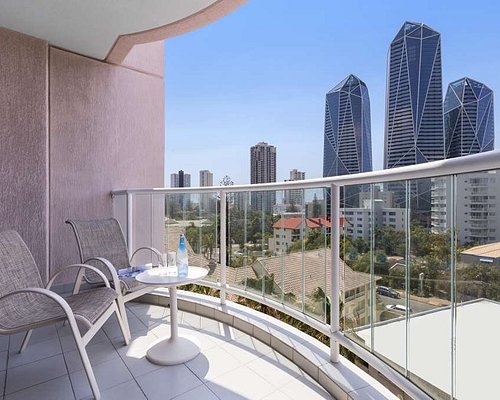 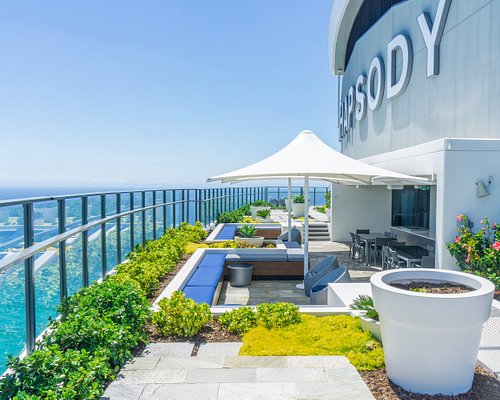 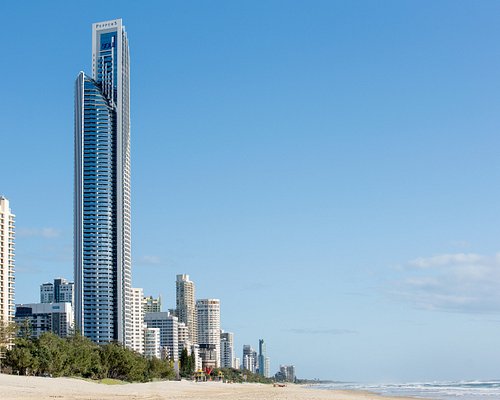 Worst breakfast buffet ever, 30 minute wait for food at 8.15am on Saturday morning. Also very basic buffet. Included parking was good and train stop right outside the resort. Getting a little dated - needs freshening up. Front counterstaff quite good but kitchen staff need a rocket.

Thank you for taking the time to provide feedback regarding your experience with us.

I do offer our sincere apologies regarding your breakfast experience, our Restaurant Roof is currently being replaced and the team are working out of a make shift area in the Library and Lounge area to ensure our guests can still receive a full buffet breakfast.

For the traveling public, these renovation works will be completed by Friday 30th August.

I am pleased you enjoyed the complimentary parking within the property and the tram stop right outside was also welcomed.

I will be sure to pass on your feedback to the front office team who will be most appreciative however I will halt on passing on your commentary regarding the restaurant staff based on their current situation.

Report response as inappropriateThank you. We appreciate your input.
This response is the subjective opinion of the management representative and not of TripAdvisor LLC.
Trevor-Bonnie B
Bribie Island, Australia
20566
Reviewed August 16, 2019
Great Staff, Great Location. Great hotel

We only stayed one night at this hotel as we were meeting friends who were visiting from Singapore. We had a 'hotel' room which was one room and a bathroom. We were offered an apartment for a small price more but only staying the one night we declined. The room was clean and ample for our needs. The bathroom was very good with a large shower which also had a view!!. We were facing the hills which was great. The reception staff were great and really made you feel welcome.
If we had one small complaint it was the breakfast. Unfortunately all the hot food we tried was only just warm. However, for the price we paid for the room which included breakfast we are not going to complain too loudly.
If and when we go back to the gold coast this is where we will stay.

Many thanks for choosing to stay with us for your recent overnight experience on the Gold Coast.

We are so pleased that you enjoyed your Hotel room for the night and it suited your needs.

I do offer our apologies regarding breakfast, unfortunately whilst our restaurant roof is being replaced, we are working out of a make shift restaurant in our lounge and lobby area. We will be back to normal on the 30th August.

I do hope we get the chance to welcome you back to Mantra Sun City again soon.

Report response as inappropriateThank you. We appreciate your input.
This response is the subjective opinion of the management representative and not of TripAdvisor LLC.
shuziiG
1
Reviewed August 14, 2019
Hotel ★★★★★ Staff ★★★★★

So thanks to tiger air our flight was delayed by 2 hours and we were dropped off at Brisbane Airport from where we caught a shuttle to Gold Coast Airport. Annoyed at the inconvenience caused by the airlines, my wife and I were pretty wrecked and in no mood to do anything. We finally arrived at Mantra - Sun City and were greeted by one of the receptionists (Larissa) who welcomed us with such a big smile that our moods started to get better as soon as we arrived at the Hotel (around 3 am).

The check-in was fairly quick and we were being escorted to our room (my wife and I were on our 1 year anniversary) by Larissa. As I'm walking through the hotel, it was a little dark but I could still see the waterslides and the pool. Upon entering our room we see a lovely bottle of Wine decorated with rose petals and lovely note! By now we're too wrecked so didn't do much exploring and just hit the bed.

The next morning/afternoon, as soon as we opened the curtains and saw the view from our balcony, all of our frustration from the flight and delays was gone in an instant! The most beautiful ocean-facing balcony I had seen.

Shortly after we went downstairs to check out the hotel and have a look around. We met the day time receptionists (Natalia, Hoi Yee, and Magenta) who were so accommodating and friendly to the point they went out of their way to help us choose on activities that we wanted to do.

We were initially staying for 7 days but then we had extended our stay by another week, simply because we felt at home thanks to the lovely and prompt staff (also it's surfers paradise, so why not?!)

Was extremely happy with the service I received and was treated with the utmost respect at all times. I've seen at other hotels that staff only does what they're instructed to do, they don't go above and beyond like the staff at Sun City.

Cheers to all the staff for making our 1 year anniversary so memorable and pleasant. Last but not least, cheers to the Manager (Daniel) for having such a professional and cheerful team!

I would definitely stay here again without any second thought!

I am so very thankful for you to take the time to provide such a detailed review following your one year anniversary stay with your wife.

It's so great to hear that all of your frustrations regarding the flight delays were dropped once you arrived here at Mantra Sun City.

We are so pleased that you and your wife enjoyed your experience with us and were able to extend for a further week; this is just wonderful.

I will be sure to share your review with the team who are always so appreciative of the recognition of our guests; thank you again for this.

We truly can't wait to welcome you back to Mantra Sun City resort once again in the future.

It was a pleasure to meet you and the team truly loved to look after you.

Report response as inappropriateThank you. We appreciate your input.
This response is the subjective opinion of the management representative and not of TripAdvisor LLC.
grahamandkay
sydney
165
Reviewed August 14, 2019
the worlds best hotel

the mantra sun city hotel wow the worlds best hotel on the gold coast sensational location, the worlds best staff, the rooms wow huge , the views to die for the entire team nothing is to much trouble for them and the hotel is a great location to everything on the gold coast and after being there you do not want to come home looking forward to going back for a third time .

Thank you for choosing to stay with us here at Mantra Sun City for your second experience; we are thrilled that you love it here so much.

I am so happy that the team have provided you with the best customer service and I will be sure to pass this onto them who will be most appreciative.

We can't wait to welcome you back to Mantra Sun City for your next experience on the Gold Coast.

Report response as inappropriateThank you. We appreciate your input.
This response is the subjective opinion of the management representative and not of TripAdvisor LLC.
ET3121
Greater Melbourne, Australia
55281922
Reviewed August 5, 2019 via mobile
Excellent location

We stayed here for a week it enjoyed our stay. The location right near beach or proximity (walk out of gate and at stop) to tram spot were amazing. The staff were helpful and friendly. Losing a star bcos two dingy old pedestal fans that hadn’t been cleaned in years were left in bedrooms and also the room needed TLC eg patch job on wall not painted over and a dirty light covers in hallway (I worked in hospitality so very particular about cleanliness).

To be honest I would definitely stay here again though.

TIP: make use of supplied shopping trolleys in car park to transport supplies.

TIP: we did our shopping at Southport Park. Easier to get car park than heading into Surfers.

Many thanks for taking the time to provide a detailed review of your experience here at Mantra Sun City resort and on the Gold Coast.

I'm sure the traveling public will be very happy with the tips provided.

I certainly appreciate the constructive feedback you have provided regarding your room and rest assured I will look into the pedestal fans and unpainted patch job on the wall.

Very pleased to hear you enjoyed your stay and that you would return, I do hope we can welcome you back in the near future.

Report response as inappropriateThank you. We appreciate your input.
This response is the subjective opinion of the management representative and not of TripAdvisor LLC.
View more reviews
PreviousNext
1…313233…