$82
$67
View deal
Free cancellation until 10/03/21
Priceline$74
eDreams$80
ZenHotels.com$82
View all 13 deals
Prices are the average nightly price provided by our partners and may not include all taxes and fees. Taxes and fees that are shown are estimates only. Please see our partners for more details.
unpluggedabroad
Bangkok and Los Angeles
1016

Fantastic discovery--came for 2 nights, stayed for 5!

From start to finish, this place is awesome! Amazing hotel grounds (pools, amenities, views, kayaks, bicycles, talking birds, etc.), beautiful deserted beach, exceptional staff (the head guy, Neung, speaks great English and is extremely helpful--the rest of the staff are extremely kind and helpful). The beachfront villas are truly amazing, worth every penny (and a fantastic value). There are a few beachfront restaurants a few minutes south, lots of great stuff to explore nearby (caves, temples, waterfalls, none of which is too touristy). I've lived in Thailand for years and traveled extensively, and I am super impressed by this hotel and general location.
Suggestions to management: fix your location on Google maps (Google maps has incorrectly placed Sirarun about 1 km south from its true location, which is a BIG problem if you're relying on Google maps to get there!); install a bigger sign for visitors coming from the south (you can't miss the sign coming from the north, but the English letters on sign coming from the south literally minuscule); and the beach is wonderful, you might as well send a staff member to the beach each morning for 5 minutes to pick up any trash that may have washed up overnight.
Stupendous place, can't wait to return!!More

Show less
Room tip: the beachfront villas are fantastic, totally private, front and back areas. I'm glad we spend the extra $$ for it, totally worth it.
See all 70 reviews
Nearby Hotels 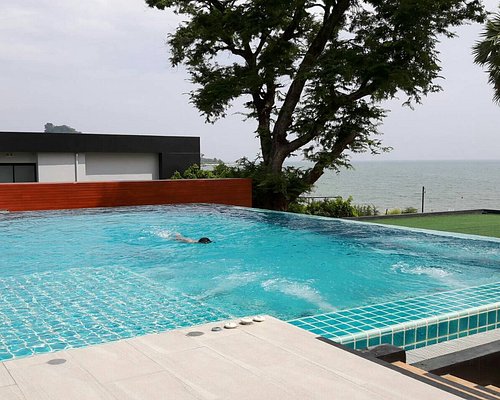 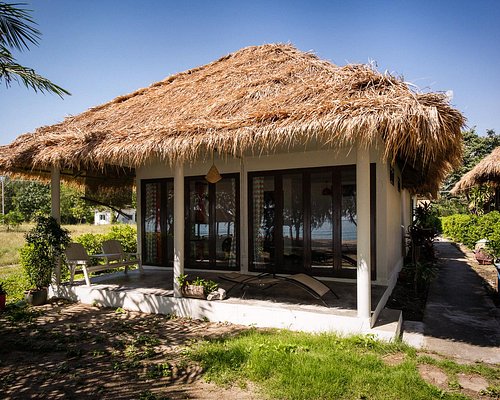 This is a boutique style resort, which is hard to review as it is not 5 stars as mentions. It is actualy on the brink of it's way either to 3star bordom or 5star excellence. The staff is really great, English well spoken, everybody was really helpful and you could see the smiles were not fake. The villas are really nice, the beds comfy, the garderobe, outside shower as an extra, really cool. In general the houses are really nice, but one can start to spot paint gaps, water leaks. I would agree to one of the earlier commnets. The resort should be maintained better. The water at the pool was checked daily, but no one took the truble to clean the few leafs and some growing green spots on the bottom of the pools. The essence of the issues were the letters creting destinations directions, many of them fell of showing direction to "..ol", "R.st.aruant" Such a small detail, but from the marketing point of view, really bad. Spare a few bath and buy new letters or simply paint new :),,, The massage service is limited, but really good and "affordable". The freee kayak's, scoooters, snorkling were nice. The food is now ok, breakfast choice limited, but reeeallly tasty. When crowded, it is buffet, if not, one can order what he wants. The beach was nice for picutres, rather clean, but one can easily find nicer in near proximity. The location is great if one has a car (we had). Piece and quit with at least 4 days of things to visit in the 1 hour drive proximity. To sum up, this is not 5star, but 4star resort (as properly descrived elsewehre). If they invest really a bit, rethink the price model, they can be a 5 star boutique gem in the region. If not, 3 star bordem awaits, they will join the growing list of shabby 3star like resorts in Thailand

The small things, paint wearing off, pool cleaniness etc, a bit more varied breakfast. If it was true 5stars, it would have been a bargin. For 4 stars, very good value.

This review is the subjective opinion of a Tripadvisor member and not of TripAdvisor LLC.
TravelTarts
Queensland, Australia
2819
Reviewed April 2, 2012
Perfect getaway

If you're looking for a quiet spot away from the manic bustle of Bangkok, and don't mind a 4-5 hour drive, then Sirarun is the resort!!! Actually, we should be keeping it a secret so that it stays quiet, unspoilt and peaceful!! The resort has everything you need for a relaxing getaway -- friendly efficient staff, great meals, idyllic location, and most of all NO CROWDS. In fact, the weekend we were there, we were the ONLY ones on the beach - heaven! Our 2-bedroom beachfront villa, with its sunbathing (or shade) pavillion overlooked the gentle lapping waters of the Gulf of Siam, fringed with palmtrees on the edge of clean sand. Some of the resort area is a little run-down, needs some maintenance attention (esp gardens, interior painting etc), but overall it's a 3-star hotel with a 6-star view!!!! Our six year old loved the horizon pool (she's a good swimmer) and frolicked on the beach and in the sea, even when the waves picked up after an overnight storm. And the adults revelled in the peace and quiet. If only it was a bit closer to BKK (where we are based) we would we would regular guests at Sirarun!!

Room tip: Be prepared for hard beds and pillows. The beachfront villas are literally just a few steps from the sand/water - and the gardenview rooms are private and quiet too.
Ask TravelTarts about Sirarun Resort
5  Thank TravelTarts

This review is the subjective opinion of a Tripadvisor member and not of TripAdvisor LLC.
Weldge
Portugal
359210
Reviewed February 26, 2012
Lovely quiet resort location for relaxing

This review is the subjective opinion of a Tripadvisor member and not of TripAdvisor LLC.
aussiemir
Valkenswaard, The Netherlands
69
Reviewed December 27, 2011
Wow!

Very, very nice resort. Our 2-bedroom villa was very spacious and nicely decorated, and the location of the villa unbeatable: right on the beach. (we could hear the gentle sound of the sea inside!!) We had dinner and breakfast which was very good. Staff very friendly and patient.

Unfortunately, we only stayed one night when we were on the way from Bangkok to Donsak. Next time, we will stay longer, just to enjoy the quitness and peace of this great place.

This review is the subjective opinion of a Tripadvisor member and not of TripAdvisor LLC.
JJJ31
Leicestershire
1238
Reviewed October 31, 2011
This is paradise in a hotel- A must stay hidden jewel

This hotel is simply wonderful, an escape from the world around you, the staff simply cannot do enough to make your stay the most comfortable possible without being intrusive. The location is idilic right on the beach in small villas with individual bedrooms, lounge, bathroom/dressing room and gardens. You lay in the pool & look out at the sea.
Water sports are available for those who wish this much activity. Food delicious, we will definately return when we are back in Thailand, well worth the drive & a beautiful area to visit surrounding this resort. Costly by Thailand standards, less than a very average B & B at home to put this in perspective- you will not regret paying tha little extra to stay here

Room tip: All rooms are excellent the sea front villas have a porch that faces the sea for sun bathing on
Ask JJJ31 about Sirarun Resort
6  Thank JJJ31