$38
$37
View deal
Free cancellation until 11/05/21
Trip.com$37
Hotels.com
Orbitz.com
View all 10 deals
Prices are the average nightly price provided by our partners and may not include all taxes and fees. Taxes and fees that are shown are estimates only. Please see our partners for more details.
Wenzu
818

Beautiful grounds but in the middle of nowhere. Restaurant staff very rude and no one speaks English. A ten minute walk from room to restaurant. Would not stay there again as staff are very difficult they have no idea how to treat customers.

See all 137 reviews
Nearby Hotels 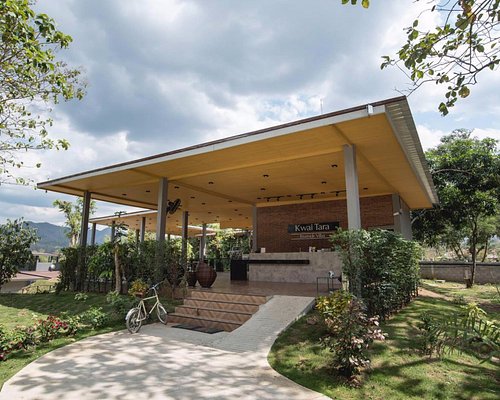 Stayed here only one night as part of a tour visiting Hellfire Pass for Anzac day.Very quiet place with a room right on the edge of the river.Had dinner in the restaurant and breakfast after the dawn service all of which was ample.Looked to have a great pool and surrounds and even some sort of zoo.Very good service....

This review is the subjective opinion of a Tripadvisor member and not of TripAdvisor LLC.
s0ma25
Brisbane
2445
Reviewed May 18, 2012
Unusual place but quite OK

I stayed here in April 2012 as it was one of the closest hotels to the Hellfire Pass Memorial in Soi Yak in Kanchanaburi Province Thailand. I only wanted somewhere cheap and clean as I had to be out at 4.30am the next morning.

The first impression is that the place is quite expansive over many acres and includes a range of activities like canoeing on the Kwai River which runs right past it, rockclimbing, archery, and many more things.

The room I was given was literally 10 yards from the river itself (I'm sure it's been flooded once or twice it was so close), and was clean and basic. It wasn't five star by any measure but I had no complaints at all, for the money I paid it was fine.

The swimming pool is huge but unfortunately after the Thai sun beats on it al day it's too warm to offer any cool relief. For that I'd suggest either Soi Yak or Erawan waterfalls which are close by.

The next morning after attending the memorial service we returned for breakfast which was typically Asian and offered basic western fare, (not even omelettes.... strange) and I'll never understand what those little weiner sausages are about, they're horrible. It was satisfactory rather than tasty.

I'd happily stay here again, it did represent good value for money, in fact I'm thinking of returning in a year or so to explore the Three Pagodas Pass region so might make his my base for 3-4 days. It's not the sort of place you'd go on your own unless you wanted to escape it all or really liked your own space. There might also be other places that are better places around but I don't really know the region very well.

The massage was outrageously expensive, I think it was 900 baht from memory.

Room tip: I liked the room by the river personally, others might not.
Ask s0ma25 about Pung-Waan Resort
4  Thank s0ma25

This review is the subjective opinion of a Tripadvisor member and not of TripAdvisor LLC.
juann22
Cairns, Australia
11785
Reviewed April 28, 2012
Out of the way, very peaceful

We were only here for one night for an early morning start for the Anzac dawn service next day. However the room was spacious although spartan, the bed comfortable and everything clean although old looking. Rooms are air conditioned and ours had a balcony that looked out over the river. The swimming pool was an excellent way of cooling off after a long day travelling. Dinner was provided and was a lovely selection of Thai dishes - so much food! There was a floor show of small children performing Thai dances which was very cute and enjoyable. The resort is a good way from anywhere however so it is difficult to want to eat elsewhere or browse markets stalls etc. This would be somewhere I would want to stay if I just wanted to relax and do nothing!

Room tip: It doesn't seem to matter, every room is a long way from reception and the restaurant!
Ask juann22 about Pung-Waan Resort
3  Thank juann22

This review is the subjective opinion of a Tripadvisor member and not of TripAdvisor LLC.
mqb2766
Chester, United Kingdom
1514
Reviewed April 19, 2012
Quiet Hotel & Good Pool

Located in its own large grounds on the banks of the River Kwai (Yai) with a great swimming pool, the hotel is nearly really good. However, the seclusion makes it difficult to walk outside and choose another restaurant if you don't really like the hotel restaurant (it is 2-3 kilometres into town). Similarly, the rooms we stopped in were somewhat spartan/functional and you viewed them as somewhere to sleep, rather than spend any time in. We didn't find the hotel restaurant that good on the first night and so went into town on the other night of the stay. Breakfast was OK.

On the plus side, our son loved the number of geckos that lived in the main part of the hotel, and that was one of his holiday highlights. Swimming pool was the largest of the trip and the small pool for young kids was particularly large.

Room tip: Ask to see the room type when booking. We were on a trip and the room we had was basic (but OK). From the web site, it looks that some of the other room types were more inviting.
Ask mqb2766 about Pung-Waan Resort
1  Thank mqb2766

This review is the subjective opinion of a Tripadvisor member and not of TripAdvisor LLC.
Experto109
New Delhi, India
57
Reviewed October 26, 2011
Huge Hotel, nice rooms

The Pung-Waan resort,Kanchanaburi is next to the Kwai river, The rooms are nice, with a TV though old, balcony, fine bathrooms. There is no buffet breakfast but overall i had a nice stay