$21
$19
View deal
Free cancellation until 11/05/21
Reserve now, pay at stay
Travelocity
Orbitz.com
Trip.com$21
View all 11 deals
Prices above are provided by partners for one room, with variable occupancy rules as provided by the property, and do not include all taxes and fees. Please see our partners for full details.
LanceM75
Damascus, Oregon
4016

we got married here. nice restaurant. bar has karaoke. very nice pool. you can also rent scooters here too. not too much to do in Chum Phae unless you have family. rooms are large and clean. very good rates and nice staff

Room tip: get a room on an upper floor away from the bar
See all 84 reviews
Nearby Hotels 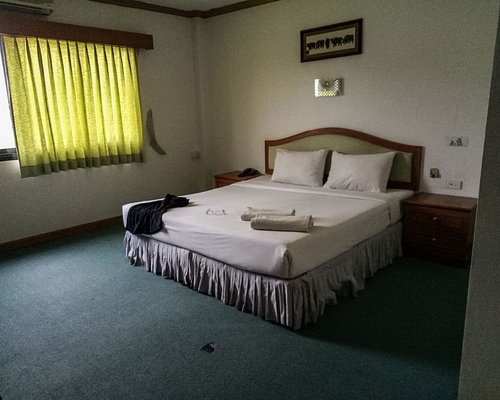 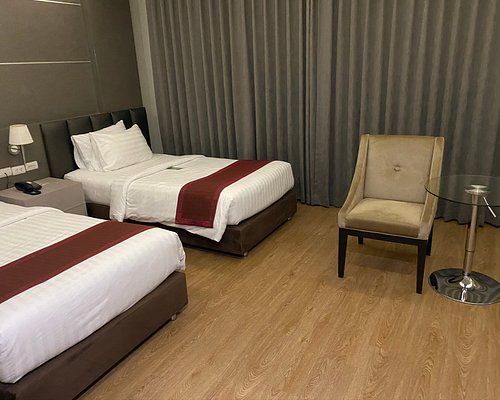 This review is the subjective opinion of a Tripadvisor member and not of TripAdvisor LLC.
SwitchDan79
London, England, United Kingdom
1519
Reviewed June 18, 2012
Luxury outside can do with work inside.

Stayed here for two nights, Hotel looks fantastic outside and in the reception area but the bedroom seemed dated and we had a lot of damage to the ceiling in the Bathroom from and old water leak from upstairs and also the room was very dusty so considering they were quiet the should have put us in another room. The Location is a good hour + drive from Khonkaen. The breakfast was passable the choice of ham, sausage or Fried egg or Thai option was available and was free with the room rate which I must say was very good value. The Enjoy Par Say beer garden is attached to the hotel and a great place to relax and enjoy a drink or sample some fantastic Thai food. Hotel has a large Tesco Lotus across the road with Banking and fast food facilities. The staff were very polite as many places in Thailand and also extremely helpful however I just feel the room let this hotel down on this occasion but I will use again.

This review is the subjective opinion of a Tripadvisor member and not of TripAdvisor LLC.
Darren R
Stone, United Kingdom
5280
Reviewed May 19, 2012
Our 4th stay...still a good value hotel

We have recently stayed at this hotel to celebrate Songkran (the Thai new year) and to visit my wife's family A fellow reviewer quite rightly points out that this property is located in Chum Phae and not Khon Kaen city which is at least an hours drive away. The staff remain friendly and are always helpful. The rooms are comfortable and clean and the breakfast is of a good standard with a choice of Asian and European food. Room service food is authentic Thai and very reasonably priced. The pool area is a very pleasant setting with a nice little bar which serves food and drinks. The adequately equipped gym is next to the pool and is clean and well maintained. The hotel is very well located for Chum Phae and now has a Tesco Lotus superstore opposite and also KFC, 7-11 shop, Amazon cafe etc. Even with Northern Thailand being a much cheaper place to live or stay than the tourist resorts I feel that around £15 a room per night with breakfast it still offers great value. They also hire motor cycles from around £1.50 per day. One thing that does let this hotel down a little is the maintenance of the rooms and in particular the bathrooms. The shower doors have never worked even when the place was almost brand new. They do not slide and on my first stay I actually walked into the bedroom to show my wife the door which had detached from the frame. There is mildew and the sealing and grouting needs doing properly. Some of the bedroom fixtures are also looking a little tatty or grubby. It's a shame because it does let the place down a little and the manager (nice guy!) should get a grip of this. On saying this Since our first stay they seem to have managed to iron out some of the early teething problems. For example the pool is now European standard (it was often closed due to maintenance issues) and the wifi now works. On the whole a very good place and we will be staying again soon!

This review is the subjective opinion of a Tripadvisor member and not of TripAdvisor LLC.
Eric C
Phuket, Thailand
6051
Reviewed April 18, 2012
Oasis in the Boondocks, Great Value too !

If you've been to Chumpae (not Khon Kaen which is an hours drive away and Trip Advisor really should consider it a separate location because it won't be like I describe for long ), you'll know it's like traveling back in time 30 years. Friendly people, country atmosphere, but until the Major Grand opened, there was no place where a modern person could stay without considering your disappearance a jungle trip and resign yourself to complete absence from the modern world.

Now there is the Major Grand opened around 2 years ago, a solid 3 star hotel which I give a 5* ranking because Trip Advisor is a satisfaction index not a Fodor's star ranking and the rate is only 25 USD per night including breakfast, obviously hard to beat anywhere in the world. You won't find any places like this in Thailand for this price. This was my second stay on account I have family nearby.

* Full Service Hotel, with all major points
covered.
* Has nice (slightly small but adequate) pool which was very clean
* Has a Gym which looked totally adequate although I didn't
use it
* Has Room Service at reasonable prices
* Has Free WiFi, this should be in Capital Letters because
you don't wanna be out in the boondocks
with no communication. And the Wifi worked
good even on a 1 hour Skype call to the US
* Has LCD TV's with clear picture and a handful
of English Channels, enough to get by
* Friendly Staff who really seem to try, I speak
Thai so I didn't really test their English, but at
least I heard a few of the staff at reception
speak English a bit and when I ordered a
Ham Cheese Omelette for at breakfast they
knew what I was talking about.

Con's (if that's what you wanna consider them)

* It's still not an international standard in small ways
but that is not a big deal at this price.
* Beds are hard, but that's normal out here
* It's in town so it's not really a resort destination
but I prefer it to the places in the countryside
outside of town cause they're missing so
many amenities, services, and connectivity

So in a nutshell, unless saving a couple bucks off this completely reasonable rate is a big deal for you, this is the only place to stay in Chumpae.

I would put this in the tips section, but it's important everyone see's it, I walked into a suite room while the maids were cleaning it after a check out and was told it cost 80 US/night. Don't bother it's not worth it.

This review is the subjective opinion of a Tripadvisor member and not of TripAdvisor LLC.
Klaus K
Munich, Germany
1
Reviewed January 21, 2012
Our Third Stay

This time we stayed for 15 nights at the hotel. It was our third stay in 2 years. The rooms are nice and clean, breakfast is boring. Everyday the exactly the same western items, thai itms changfe slightly. Staff not very attentive. The swimmingpool is great and watrer quality significantly improved compared with last year. The pool bar operated this year again (it was closed last year). I missed more hotel management attention. We rented a motorbike (150 THB per day). It was ok but run already 20.000 kilometers. Overall the hotel is a good value for money!

This review is the subjective opinion of a Tripadvisor member and not of TripAdvisor LLC.
View more reviews
PreviousNext
1…101112…