Secluded, safe, and quiet, but …. - Just off the Wild Atlantic Way close to Sneem

“Secluded, safe, and quiet, but ….”
bmdXXzM1X1pyMQ==
other travelers have booked this property

Review of Just off the Wild Atlantic Way close to Sneem 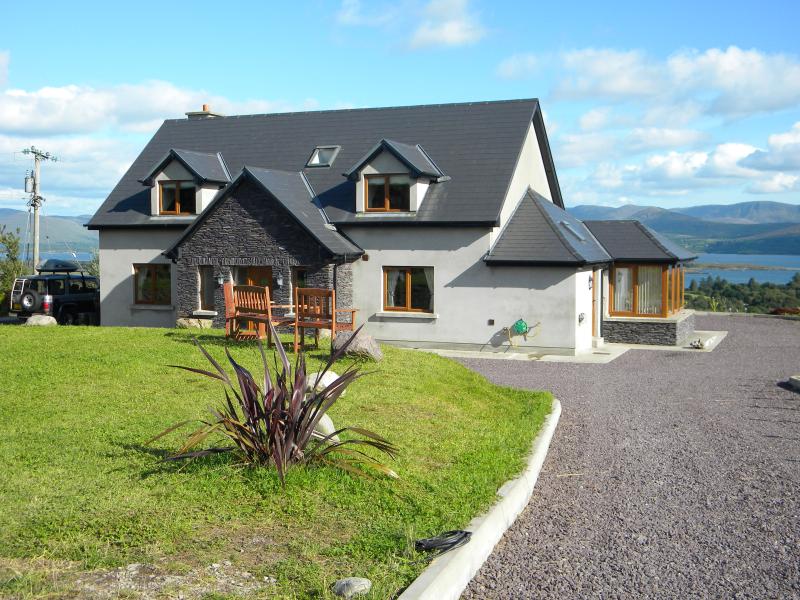 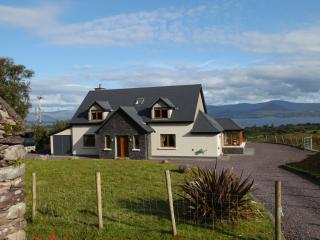 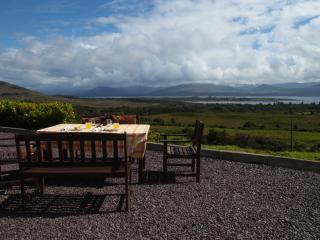 Excellent - based on 22 reviews
Write a Review

We rented Nestle Stones for three weeks in May and early June, 2014, and enjoyed our stay there. It is a large and comfortable 5-bedroom (3 with en-suite bath) house with major advantages, but also with a few annoyances to curb one’s enthusiasm. We have still rated it “Excellent” but would have given it an “Excellent — “, had that rating been available.
Advantages include:
1. Secluded location, safe and quiet, with outstanding panoramic view over the Bay of Kenmare.
2. Large house, well laid-out, with lots of beds -- plenty of room for our group of seven adults, and then some.
3. High standard of furnishings and equipment, especially in the kitchen (except for the knives, which are neither sturdy nor sharp, and an everyday source of frustration).
4. Four and one-half bathrooms, 2 ½ of which are on the ground floor! The half-bath (toilet and sink) near the front entrance is a real convenience. The showers are of excellent quality, and if you turn off the tap as an economy measure while soaping up, the water will come back on to the exact temperature you had before.
5. Lots of counter space, big dining table that seats eight comfortably, lots of space to sit and enjoy the beautiful view, including a solarium with windows on three sides.
6. A separate utility room equipped with both washing machine and clothes dryer, an unusual advantage, in our experience.
Given these important advantages, one should nevertheless keep in mind that the house is in the boondocks: The nearest village, Sneem, is 10.5 km away by road (4 km as the crow flies), a 15-17 minute drive. Getting from Nestle Stones to the standard tourist destinations on winding and narrow – often single-track – roads usually takes considerably longer than expected. That said, this is probably more a general problem of County Kerry than a problem specific to this house. If you plan to stay in Kerry for a longer time, you might consider a week at Nestle Stones, followed by time at other locations, perhaps on the north side of the Iveragh Peninsula or somewhere on the Dingle Peninsula. Also, so far as we could determine, the nearest large supermarket (Tesco) is in Killarney, a full hour’s drive away. Kenmare (half an hour away) has a Super Valu, but it has a limited range of goods.
There are some minor annoyances:
1. Without clothes hooks in the bathrooms, there was no place to hang up pyjamas or clothes when bathing or taking a shower, or to hang up a toiletry kit.
2. The tiny soap plate in the showers holds only a single bar of soap; so there was no place to put shampoo, conditioner, washcloth, sponge, or anything else you use when showering.
3. Even though each bedroom is set up for at least two occupants, there is only a single towel bar in each of the bathrooms, so no place to hang up the generous-sized bath towels to dry after you bathe or shower.
4. The master bathroom has no shower, only a large Jacuzzi tub, so my wife and I always had to shower in someone else’s bathroom.
5. The skylight and the ceiling lamp in the master bathroom throw light toward the mirror in such a manner that seeing to shave or apply makeup is nearly impossible. The light over the medicine cabinet did not work, so it could not alleviate the problem.
6. There is no night table or reading lamp in one of the downstairs bedrooms.

And a couple of things aren’t quite as advertised:
1. Chester and Charlie, the resident Falabella ponies, are supposed to be cute and friendly, and the instruction sheet in the house says to feel free to pet them. They are cute, but they are in fact ill-tempered, fight with each other constantly, and want to bite, so beware. Chester, who is downright vicious, bites Charlie hard enough to draw blood, and both try to bite the hand that feeds them. Chester also likes to kick. Over a week or so, we managed to gain their confidence to the point that they would sometimes let us brush them a bit, although they clearly were not used to such attention, and wouldn’t tolerate it very long. We finally abandoned this project, even though two of our party were experienced horsewomen who had ridden for years.
2. My wife and I always look for a king-size or else two twin beds because we cannot sleep comfortably in either a double or a queen. Therefore the “king-size bed” in the master bedroom was a major deciding factor in choosing to rent this house rather than one of the others we were looking at. Perhaps the term “king size” means something different in Ireland, for to us the bed was, In fact, queen-size (60 inches wide) rather than a king, which is 78 inches wide in North America. Three other bedrooms also have the same queen-size beds. Fortunately, we were able to move one of the single beds from another bedroom into the master bedroom as a second-best solution to the problem.
Finally, whether you consider the lack of wi-fi and the spotty cell-phone reception to be an advantage or disadvantage likely depends more on your age than on anything else, so I will leave it up to you how to classify those issues.

Date of stay: June 2014
Liked best: Lots of room, lots of bathrooms, and high standard of equipment
Liked least: Resident ponies were advertised as friendly, but they were nasty and ill-tempered
Traveling group: Extended Family
Would you recommend this hotel to a friend?   Yes.
Recommended for:
Was this review helpful? Yes
This review is the subjective opinion of a Tripadvisor member and not of Tripadvisor LLC.
Problem with this review? Thank you. We appreciate your input.

16 helpful votes
“Perfect for a large family group”
Reviewed August 1, 2013 for a stay in July 2013
1
person found this review helpful

We stayed at Nestle Stones during the rarest of events - an Irish heatwave! Everything about the property was just about perfect. We were five couples and enjoyed our best ever family holiday.
The location is remote, but this is a small price to pay for the truly stunning panoramic views across Kenmare bay and to the Beara mountains beyond.
We ate alfresco on the large table provided, while drinking in the view (and copious amounts of sangria!)
We sunned ourselves and swam in the surprisingly warm waters at the beautiful Derrynane beach which is a 40 minute drive away. For those who just want to swim there is a jetty five minutes away, which is best at high tide (see photo taken early morning from adjacent foreshore)
The ten of us had plenty of space and the house is very well equipped and it's hard to think of anything that could have been added to improve our stay.
Charlie and Chester, the little ponies are cute and mischievous and we enjoyed feeding them carrots and apples.
The nearest pubs are in Sneem which is a ten minute drive away. D O'Shea's serves the best food but we enjoyed the Guiness in four or more Sneem bars.
We had no problem organising a taxi home for about ten euro.
This turned out to be our best ever family holiday and I can recommend Nestle Stones to anyone organising a holiday for a large family.

Date of stay: July 2013
Liked best: Magnificent Views
Liked least: Could be closer to shop,bars and restaurants
Traveling group: Large Group
Would you recommend this hotel to a friend?   Yes.
Recommended for:
Was this review helpful? Yes
This review is the subjective opinion of a Tripadvisor member and not of Tripadvisor LLC.
Problem with this review? Thank you. We appreciate your input.

Donneville, Midi-Pyrenees, France
Reviewed August 25, 2012 for a stay in August 2012
Date of stay: August 2012
Liked best: Everything not to mention the view.
Liked least: I don't know
Traveling group: Large Group
Would you recommend this hotel to a friend?   Yes.
Recommended for:
Was this review helpful? Yes
This review is the subjective opinion of an individual traveler and not of Tripadvisor LLC nor of its partners. Tripadvisor performs checks on reviews.
Problem with this review? Thank you. We appreciate your input.

Dublin
Reviewed August 11, 2012 for a stay in July 2012
Date of stay: July 2012
Was this review helpful? Yes
This review is the subjective opinion of an individual traveler and not of Tripadvisor LLC nor of its partners. Tripadvisor performs checks on reviews.
Problem with this review? Thank you. We appreciate your input.

Dublin, Ireland
Reviewed June 25, 2012 for a stay in June 2012
Date of stay: June 2012
Liked best: The view and the equipment of the house
Liked least: Nothing
Traveling group: Large Group/Tour
Would you recommend this hotel to a friend?   Yes.
Recommended for:
Was this review helpful? Yes
This review is the subjective opinion of an individual traveler and not of Tripadvisor LLC nor of its partners. Tripadvisor performs checks on reviews.
Problem with this review? Thank you. We appreciate your input.

Date of stay: November 2017
Was this review helpful? Yes
This review is the subjective opinion of a Tripadvisor member and not of Tripadvisor LLC.
Problem with this review? Thank you. We appreciate your input.

Date of stay: April 2015
Liked best: Confort, quantité et qualité des équipements, situation
Liked least: Rien ne nous a déplu.
Traveling group: En famille élargie
Would you recommend this hotel to a friend?   Yes.
Recommended for:
Was this review helpful? Yes
This review is the subjective opinion of a Tripadvisor member and not of Tripadvisor LLC.
Problem with this review? Thank you. We appreciate your input.
Previous Next
1 2 3 4
Updating list...
Still can't find what you're looking for?

Looking for a place to stay in Sneem?
View all 37 vacation rentals