Quiet area, close to Spa's. We have stayed at this property one more than one occasion.

Several blocks from center of town, but easily an enjoyable walk. Only a couple blocks from Funicular. Area is filled with beautiful trees. Hotel has a very nice outdoor pool.

See all 621 reviews
Nearby Hotels 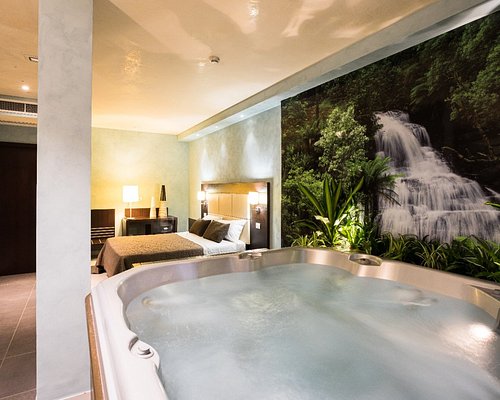 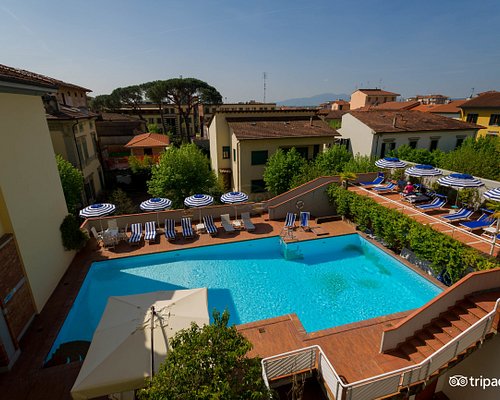 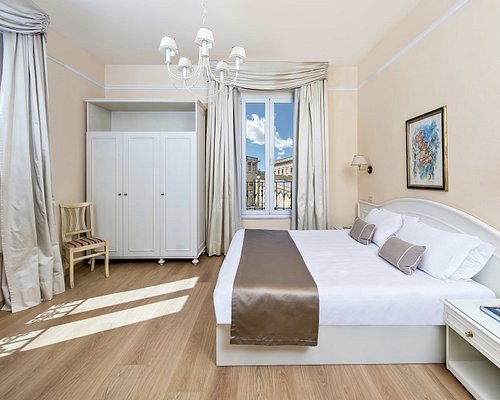 As this was our first trip to Tuscany we were hoping for a nice hotel, and this one certainly didn't disappoint. From the bright, welcoming reception area, friendly staff, tasty food and excellent location, we felt right at home. The hotel is within walking distance of the lovely town of Montecatini, which has plenty of shops and restaurants, and a train station. We frequented this station on a few occasions as it was the most convenient way to get to Florence, Lucca and Pisa. The service was good and we met a very friendly young girl working there on our first trip who gave us plenty of tips. Staff at the hotel are also very informative and can arrange trips or book taxis. Breakfast was fresh, tasty and there was such a variety of food. There was also a bar where you could buy afternoon drinks if you were lounging by the pool or the lovely seating areas nearby. Housekeeping staff were efficient and friendly and our room was already refreshed most mornings when we returned from breakfast. There were also bikes to hire, spa facilities, and a lovely swimming pool. There was always a lovely ambience in the hotel. This hotel was good value, great location for us, as we enjoy walking, and we would hope to return again soon.

Room tip: Our room was on the first floor, at the front of the hotel, and seemed quiet enough to us, though we were out most of the time.
Ask FairyIreland about Grand Hotel Panoramic
2  Thank FairyIreland

This review is the subjective opinion of a Tripadvisor member and not of TripAdvisor LLC.
Azize G
11
Reviewed August 8, 2016
Great place to stay with lovely food!

Very nice hotel with very good food and kind and knowledgable staff. Definitely without a doubt worth the money. Located just beneath the old town, surrounded by green trees and mountains, a very peaceful place. I would recommend this hotel to anyone!

This review is the subjective opinion of a Tripadvisor member and not of TripAdvisor LLC.
peregrine001gh
Edinburgh, United Kingdom
12
Reviewed July 18, 2016
fantastic

Beautiful, I really loved the breakfast and the swimming especially with a great view to see as well. Brilliant rooms, great balconies and great facilities!! Lunch is just around the corner with great Italian culture to the taste. Plus your just a two minute walk away from a funicular that takes you to Montacantini Alto and I rate that 5 star!

Room tip: The best views is from floor 4 because you get the full on affect at night.
Ask peregrine001gh about Grand Hotel Panoramic
2  Thank peregrine001gh

This review is the subjective opinion of a Tripadvisor member and not of TripAdvisor LLC.
schofuelled
Christchurch, United Kingdom
4635
Reviewed July 17, 2016
Well Located

We were moved to the Grand Hotel Panoramic due to a plumbing issue in the Hotel we booked via Booking.com. We had a few concerns but decided to go with the change.

We arrived at 8-9pm and were greeted by the reception staff in stilted English – after the usual formalities we were given the room key. The only issue here was that there was no offer to take our bags, or were we informed when breakfast was served.

We found the room, which was clean and a good size, as was the Bathroom/Shower. The air conditioning did a grand job of keep the room cool, and did so all week.

Taking a look around the hotel appeared well maintained and clean. Built perhaps in the seventies or eighties it had a bit of a retro vibe, something which my fiancée and I both like. We spent most our mornings and early afternoons by the pool, which was never too busy, always being able to find seating or a sun bed.

The Hotel has a bar, which was never manned, but reception was just next door, so we just needed to ask for service. It would of been nice if there had been a barman on all day, perhaps coming out to the pool asking if we wanted drinks, as Im sure our bar bill would of then been far larger.

Breakfast was typical, and everything you would expect – as was the Hotels restaurant, so no complaints about either.

Overall a very pleasant stay, would I return To Grand Hotel Panoramic.... Yes!

This review is the subjective opinion of a Tripadvisor member and not of TripAdvisor LLC.
ahlsti
Barkarby,Sverige
3
Reviewed July 4, 2016
to come back definitely

We went to Montecantini terme by car and in the 5 Days at Grand Panoramic hotel we eat a lot of good food. The food were wery well made, we hade thre dishes every evening. Good service at the hotel nice staff and plesant atmosphere and a good pool to. Good aircondition in the rooms. You can take a walk to the city there is a lot of restaurants and shopping. From the hotel it is easy to go and vistit Pisa , Florens or visit a vinyard. We drove to Monecarlo(Lucca) to visit the vinyard Fattoria Del Teso and hade a wery nice day. Ask the turist information they provide you with every thing you need to know about vinyards and number to call if you want to visit. Have a nice time Irene and Rune from Sweden

Room tip: Room with view to Montecantini Alto give you sun in the morning and shadow in the evening and a grate view.
Ask ahlsti about Grand Hotel Panoramic
Thank ahlsti