“It was perfect...again.”
RlNKXzlfelRp
other travelers have booked this property 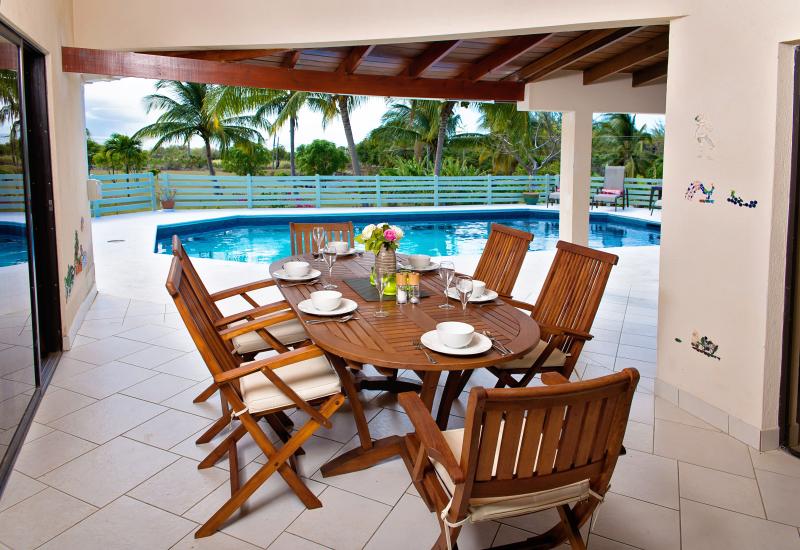 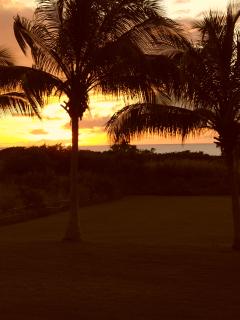 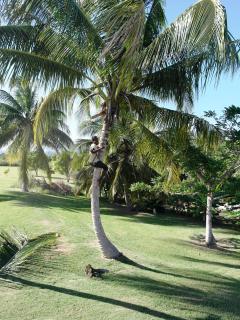 Excellent - based on 10 reviews
Write a Review

Our party included four adults and three kids; it was our second visit and, again, New Moon surpassed our expectations. It's a well-appointed house with all the amenities we need to kick back and enjoy—incredibly spacious, well-maintained grounds, a great pool and deck, a well-equipped kitchen and a great audio-visual setup.

Gibbes Beach is five minutes away, we saw monkeys on the grounds almost every day, and it's so wonderfully private.

Date of stay: April 2016
Liked best: The house is spacious, secure, comfortable and private.
Liked least: I had to leave.
Traveling group: Large Group
Your age range 35-49
Would you recommend this hotel to a friend?   Yes.
Recommended for:
Was this review helpful? Yes
This review is the subjective opinion of a Tripadvisor member and not of TripAdvisor LLC.
Problem with this review? Thank you. We appreciate your input.

7 helpful votes
“A PERFECT location for four adults and three kids”
Reviewed May 7, 2015 for a stay in April 2015
3
people found this review helpful

It's just as advertised—a spotless, well-appointed house, spacious kitchen = room enough for multiple cooks, an island breeze that keeps the principal rooms cool + very effective air conditioning in the bedrooms. The sound system was great and easy-to-use, the pool was lovely and, while there are a couple of houses nearby, the orientation of the property is such that you feel as if there's no one else nearby. The well-kept grounds include a level lawn area that's more than enough room for soccer, tag, etc. The grounds also provide plenty of bananas, limes, mangoes and coconuts, depending on what's in season. The fireflies and bats put on impressive nighttime shows, and we occasionally saw monkeys on the property, including one who stopped to drink from the pool.
The local staff—housekeeper and rental manager—were accommodating, thoughtful and generous; Alun, the property owner, was equally helpful, and always quick to respond to emails.
We rented a van, because the location seemed a little remote. And, while I'm glad we did, I was surprised to see busses pass by far more frequently than I expected. It's a three-minute ride downhill to get to Gibbes Beach—I don't know how a beach so beautiful could have so few people on it but, at times, it felt as if we had the beach to ourselves. The snorkelling on the reef at the south end of Gibbes was amazing—we saw tonnes of beautiful fish and a sea turtle—although it probably wasn't wise to be snorkelling there without a dive flag, because the tour and rental boat drivers aren't the most cautious lot.
Given the great kitchen and large poolside dining table, we did a lot of own own cooking; but, if you're looking for great local (i.e. non-tourist trap) food, Chris's is a five-minute walk up the hill; a few kilometres away, I'd suggest the Carlton Variety Mart on Carlton Road; like so many great places to eat, it really looks like nothing special, but the barbecue was on, and a cricket match was playing on the big-screen TV on the patio. Jefferson, who owns the place, is a great grill man—try the pigs' tails, which the kids insisted on calling ribs (apparently they can't handle the truth). Our party of seven had a dozen beer and ate until we were stuffed for a price tag of $155 BD.
We've rented a lot of great properties in some beautiful parts of the world, but we usually don't count on returning, because there's always something new to see. But I'm confident we'll return to New Moon Villa.

Date of stay: April 2015
Traveling group: Large Group
Would you recommend this hotel to a friend?   Yes.
Recommended for:
Was this review helpful? Yes
This review is the subjective opinion of a Tripadvisor member and not of TripAdvisor LLC.
Problem with this review? Thank you. We appreciate your input.

We stayed with two other couples and one youngster. The location is fantastic, close to the beach and a perfect base to enjoy all the west coast has to offer. Having a car was handy to go exploring.

The villa itself is secluded and peaceful, spacious and kept spotless by the lovely housekeeper. The grounds are pretty extensive (perfect for the odd impromtu game of cricket with your very own New Moon cricket bat!!)

The views from the poolside overlooking the grounds are just stunning (oh how i miss those Bajan sunsets;( …just glorious, no evening was ever the same) - best enjoyed with a fresh coconut and rum cocktail (Chris the groundskeeper was more than happy to shimmy up the palm trees for us :))

We stayed in Bedroom 2 behind the master bedroom, it was en suite with power shower, lovely large comfortable bed, HUGE telly with endless Netflix movies, great for days when you just want to chill in peace and comfort. Aircon was excellent and cooled the room instantly.

It felt so relaxed being there, like you lived there, with every kind of creature comfort you need. I would not stay anywhere else if i was visiting the area again.

Date of stay: March 2015
Liked best: swimming pool and sunsets!
Liked least: couldn't fault the place
Traveling group: Extended Family
Your age range 25-34
Would you recommend this hotel to a friend?   Yes.
Recommended for:
Was this review helpful? Yes
This review is the subjective opinion of a Tripadvisor member and not of TripAdvisor LLC.
Problem with this review? Thank you. We appreciate your input.

Stayed 8 days in March and was very satisfied with the location and all the amenities. I lived in B'Dos for 2 years and I know the island very well and I must say this place is a must. Daily house cleaning services, large, clean, spacious, and very quiet. Highly recommend New Moon Villa and would not hesitate to rent again when I go back to B'Dos.

You will not regret if you stay @ New Moon Villa. It just makes your visit and time in B'Dos that much more enjoyable.

Date of stay: March 2015
Traveling group: Large Group
Would you recommend this hotel to a friend?   Yes.
Was this review helpful? Yes
This review is the subjective opinion of a Tripadvisor member and not of TripAdvisor LLC.
Thanks Marc for your kind review. I am pleased you had a lovely time, and its especially nice to receive such nice comments from someone who knows the island as well as you do. We look forward to welcoming you back again soon!
This response is the subjective opinion of the management representative and not of TripAdvisor LLC.
Problem with this review? Thank you. We appreciate your input.

I stayed 3 weeks over christmas and had a lovely time ! The villa was perfectly located and the view from the poolside was amazing. The villa had everything we needed and the bonus was that there was a travel cot which came in very handy. My husband and I would recommend this villa to anyone and we will be going back !!

Date of stay: December 2014
Traveling group: Spouse/Partner
Would you recommend this hotel to a friend?   Yes.
Recommended for:
Was this review helpful? Yes
This review is the subjective opinion of a Tripadvisor member and not of TripAdvisor LLC.
Problem with this review? Thank you. We appreciate your input.

The villa is a spacious home with plenty of privacy, huge kitchen, modern bedrooms and baths. Complete with a great pool and deck to cook out on and then chill out on, while listening to the excellent wireless sound system hook up. The property grounds are also simply amazing with gardens, fruit trees, all overlooking west side ocean sunsets.
Here, You feel like your many miles from civilization, yet your really only a few miles from towns, grocery stores and restaurants of the famous Westside Barbados, close to all prime beaches and snorkel locations with the turtles. A car is useful here. We loved this home and recommend it to anyone looking for a relaxing holiday! You won't want to leave!

Date of stay: December 2014
Was this review helpful? Yes
This review is the subjective opinion of a Tripadvisor member and not of TripAdvisor LLC.
Problem with this review? Thank you. We appreciate your input.

Ideally located in secluded aspect on the west coast above Gibbs Bay this villa offers everything you need for a relaxing get away. It's spacious and well equipped with TVs in every bedroom, fans and air conditioning to suit every taste. The pool and garden area is spectacular with sea views over the Caribbean sunset and close to Gibbs and Mullins ( car recommended). The kitchen facilities are fabulous and it's great having a couple of chickens laying you fresh eggs for breakfast. I would highly recommend it to anyone. Best place I've stayed in Barbados! ☀️

Date of stay: December 2014
Was this review helpful? Yes
This review is the subjective opinion of a Tripadvisor member and not of TripAdvisor LLC.
As one of our first guests thank you very much for your kind review. Hope to see you back again soon!
This response is the subjective opinion of the management representative and not of TripAdvisor LLC.
Problem with this review? Thank you. We appreciate your input.
Previous Next
1 2 3
Updating list...
Still can't find what you're looking for?

Looking for a place to stay in Gibbes?
View all 64 vacation rentals