Review of The Cottage Hay on Wye 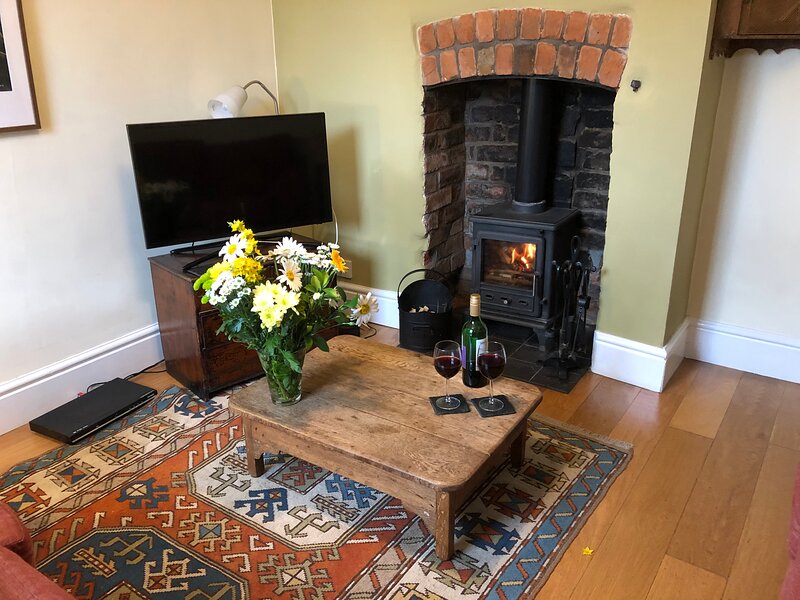 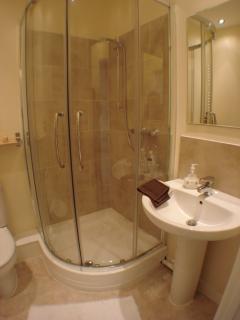 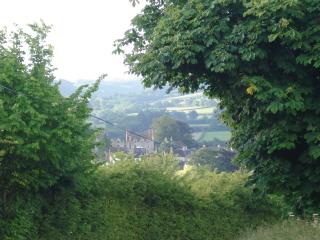 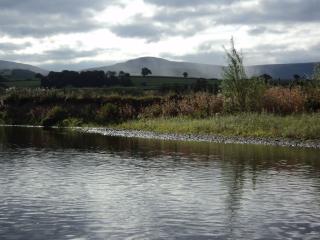 The Cottage is in a perfect central location for visiting Hay.
Our big concern was lack of parking availability but in his "Welcome Pack" Roy, very kindly, suggested alternative parking places.
We really liked the spacious corner shower.
Heating wasn't a problem, it was easily turned up when needed but I did find it difficult to return it to 5° as Roy had suggested, but that could just have been me, not being used to that system.
We really enjoyed our stay in Hay.

My wife and I and two young adult children used The Cottage for a weekend visit to Hay. We thought the property offered good value - communication with the owner was straightforward and friendly. The house itself is cosy, clean and well equipped. The weather was fine during our stay - so we really didn't spend that much time in the house - had we done, we'd have probably found it a bit on the small side for the four of us. Although there wasn't the obligatory "welcome pack', we found everything we needed (although a roll of loo-paper would have been good). We didn't experience any problems with the heating - it worked fine for us. Also nice to find fuel for the old burner in the cupboard under the stairs.

The house itself is slap bang in the middle of Hay - close to good places to eat/drink and buy books. I suspect parking could be a bit of a nuisance at the height of the season as outside there is a 2-hour restriction between 9am and 6pm (from memory). Although the property doesn't have wifi we got download speeds of 7+ mbps from the BT Wifi (comes part of our home broadband package). Also, mobile signals in the area are a bit hit and miss.

Although the period charm of the cottage has been lost through the installation of nasty white UPVC doors and windows, we were happy enough to spend a weekend here.

Date of stay: March 2014
Liked best: Central location, original artwork and curios
Liked least: That white UPVC makeover!
Traveling group: Teenagers
Would you recommend this hotel to a friend?   Yes.
Was this review helpful? Yes
This review is the subjective opinion of a TripAdvisor member and not of TripAdvisor LLC.
Problem with this review? Thank you. We appreciate your input.

3 helpful votes
“Stay marred by no central heating for 1/3 of our stay and owner's refusal to compensate adequately”
Reviewed March 5, 2014 for a stay in February 2014
1
person found this review helpful

A friend and I stayed at the cottage for 3 nights in Feb 2014 as we were on a course nearby. The first evening was ruined by the central heating not working, we checked we were correctly adjusting the thermostat - the instructions were in a kitchen drawer, rather than in a loose leaf folder left out as in every other rented cottage we've let. As 02 network coverage is poor in Hay and non existent in the cottage I either had to stand outside on the pavement or go to the pub opposite to ring or text the owner. The wood burning stove took the chill off the living room but the rest of the cottage remained cold. The owner arranged for a plumber to fix the heating the next morning, but as we had to leave at 8.45 we had to get up in the cold.
I requested what I considered to be a reasonable amount (just under a third of the total payment) as compensation for the inconvenience and discomfort for one third of our stay. The owner paid just under one sixth in compensation - his logic was spurious, that we left early so cold was not a problem (it is irrelevant if we rose at 5 or 6 am, we'd still have liked heating), he doesn't find the cottage cold (again irrelevant as preferred temperature is subjective), we left refuse in kitchen bin despite his requests for us not to (I didn't receive emails from him about this, so assumed a cleaner would be in soon after our stay but we did take the recycling with us - instructions in a file in cottage would have avoided this), he charged a discount rate (we didn't barter, simply paid the requisite amount on time). The heating issue aside the cottage is clean, well equipped and tastefully and neutrally decorated in a central location (although parking would be an issue in busy times) - it would be most suitable for a couple rather than friends, as the double bed is very comfortable, (but my friend who occupied the very small bedroom said the bed was saggy). The cottage would be a tight squeeze for 4 adults.

Date of stay: February 2014
Liked best: central position in Hay
Liked least: the central heating wasn't working for the first 1/3 of the rental
Traveling group: Friends
Would you recommend this hotel to a friend?   No.
Recommended for:
Was this review helpful? Yes
This review is the subjective opinion of a TripAdvisor member and not of TripAdvisor LLC.
I feel that this review is unfair. The guests arrived in the evening and apparently at some point in the evening the boiler had tripped out. I apologised to the guest when she phoned and explained that she was more than welcome to stoke up the fire with additional logs and it would burn overnight. This keeps the house warm. A plumber arrived early the next morning and started the boiler which had tripped out. I would undoubtedly have refunded a full one day's stay other than the fact that rotting food had been left in the house despite very clear requests in the instructions to take it away and the sheer unpleasantness of the guest.
This response is the subjective opinion of the management representative and not of TripAdvisor LLC.
Problem with this review? Thank you. We appreciate your input.

11 helpful votes
“Perfect base for a few days in Book town”
Reviewed February 9, 2014 for a stay in August 2013
1
person found this review helpful

We spent three days at this rental. It was exactly as presented. It would be a tight fit with four adults, but worked for us. The restaurant/bar across the street was great.

Date of stay: August 2013
Liked best: Nice location in the heart of town.
Traveling group: Young Children
Would you recommend this hotel to a friend?   Yes.
Recommended for:
Was this review helpful? Yes
This review is the subjective opinion of a TripAdvisor member and not of TripAdvisor LLC.
Problem with this review? Thank you. We appreciate your input.

1 helpful vote
“We felt priveleged to be able to stay in this stunning little cottage.”
Reviewed February 8, 2014 for a stay in December 2013
1
person found this review helpful

The cottage was surprisingly easy to find and perfectly placed for exploring Hay on foot. It was sparklingly clean and incredibly comfortable, with everything you could possibly need in the kitchen. It warmed up quickly (we were there over an extremely cold and wet weekend), and remained warm and cosy throughout. We all slept well from the first night! Across the road was a welcoming pub/restaurant which served tasty and reasonably priced meals. We loved everything about the property, and the village. Even the weather didn't affect out enjoyment. We look forward to staying at the cottage again in the future.

Date of stay: December 2013
Liked best: absolutely everything was flawless
Liked least: there was nothing to dislike
Traveling group: Friends
Would you recommend this hotel to a friend?   Yes.
Recommended for:
Was this review helpful? Yes
This review is the subjective opinion of a TripAdvisor member and not of TripAdvisor LLC.
Problem with this review? Thank you. We appreciate your input.

We had a great stay at the cottage. It was clean , cosy and well equipped for a range of needs from different visitors. Central location in town was very handy. Particularly enjoyed the ease of getting log burner lit after a very wet and cold days hiking. Would recommend this place to anyone and look forward to returning.

Date of stay: January 2014
Traveling group: Friends
Would you recommend this hotel to a friend?   Yes.
Was this review helpful? Yes
This review is the subjective opinion of a TripAdvisor member and not of TripAdvisor LLC.
Problem with this review? Thank you. We appreciate your input.

8 helpful votes
“What a special place”
Reviewed January 16, 2014 for a stay in November 2013
1
person found this review helpful

This is an absolutely lovely place to stay. It's tranquil, peaceful and beautiful, right in the heart of Hay, and it simply couldn't be better. The cottage is very-well equipped with everything you could want or need, and Roy, the owner, couldn't have been more attentive prior to and during our stay. There are many fabulous shops to explore in Hay, and I'd highly recommend The Blue Boar and the tapas bar. I hope I'll be returning very very soon.

Date of stay: November 2013
Liked best: The bedrooms were really cosy, and I also loved the location.
Traveling group: Spouse/Partner
Would you recommend this hotel to a friend?   Yes.
Recommended for:
Was this review helpful? Yes
This review is the subjective opinion of a TripAdvisor member and not of TripAdvisor LLC.
Problem with this review? Thank you. We appreciate your input.
Previous Next
1 2 3 4
Updating list...
Still can't find what you're looking for?

Looking for a place to stay in Hay-on-Wye?
View all 42 vacation rentals