Tenerife
Search for "{0}"
Post
Trips
Tip: All of your saved places can be found here in My Trips.
Inbox
Log in to get trip updates and message other travelers.
ProfileJoin
Search

“Todo perfecto”
cnZ6XzExX3F0aQ==
other travelers have booked this property 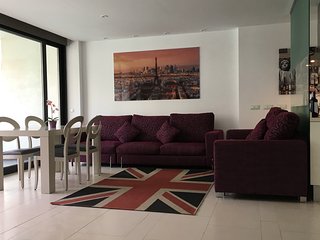 Average - based on 8 reviews
Write a Review

It's actually in palm Mar we stayed in December for over Christmas with our little girl when we booked it stated it's in Los christianos well it's not we had to pay 20€ a day to get there then 20€ back
There's 1 English bar there what's okay though everyone seemed friendly enough
And there's one supermarket there apartments are lovely the pool was freezing so we didnt even get a pool day I suppose it would be better if we went in main season...
Wouldn't go back though the apartments are beaut though! X

Date of stay: December 2017
Was this review helpful? Yes
This review is the subjective opinion of a TripAdvisor member and not of TripAdvisor LLC.
Problem with this review? Thank you. We appreciate your input.

I have hired lots of properties in the past and never had a bad experience, unfortunately this apartment proved to be the exception.

Had this property been as advertised I am sure we would have had a lovely time. Unfortunately despite the claims of a quiet, well maintained complex with a large and inviting pool, as shown prominently in the accompanying photographs, the reality was a pool that had been emptied some months ago, and a team of workmen drilling out the bottom of the pool from the second day of our stay.

Needless to say the owner made no mention of the true position either when we booked or indeed in the weeks prior to our arrival, when she must have known the position, this despite the fact that she knew we were a family with children.

She made matters worse by failing to reply to either of our e mails asking for an explanation, and still worse when she suggested to trip advisor that she had contacted us immediately she became aware of a problem and offered us alternative accommodation, a blatant lie.

I note that she has now belatedly altered the profile to acknowledge the problem with the pool but even then she suggests that although work is being done on the pool, the major work has already been undertaken. When we left a few days ago we were told that the pool would not be open for at least another 3 weeks and I see from other profiles relating to apartments in the same complex that more honest owners are warning that the pool will not be in use until 30th June.

Don't hold your hopes out for the beach which is a 15 minute walk away. There is a reason that the owner posted pictures of the beach at sunset, because in daylight it is pretty unappealing with an almost total absence of sand.

Other than a wall in the living room, which has been partially replastered, but not painted, the apartment itself is perfectly nice, There is a small garden at the back, not shown on the photographs, presumably because it adjoins two blocks of flats which are under construction. Thankfully no work was being done on them whilst we were present but they are far from complete and so any future renter would be wise to have that in mind if considering this property.

Date of stay: April 2017
Would you recommend this hotel to a friend?   No.
Was this review helpful? Yes
This review is the subjective opinion of a TripAdvisor member and not of TripAdvisor LLC.
Problem with this review? Thank you. We appreciate your input.

Travelers are raving about these Palm-Mar hotels

Date of stay: May 2018
Would you recommend this hotel to a friend?   No.
Was this review helpful? Yes
This review is the subjective opinion of a TripAdvisor member and not of TripAdvisor LLC.
Problem with this review? Thank you. We appreciate your input.

Date of stay: May 2018
Was this review helpful? Yes
This review is the subjective opinion of a TripAdvisor member and not of TripAdvisor LLC.
Problem with this review? Thank you. We appreciate your input.

Looking for a place to stay in Palm-Mar?
View all 151 vacation rentals