Grate location few steps from city center.
The kitchen is very well equipped with free coffee.
Our room was spacious in the ground floor.
Close to the public thermal pool.
Easy to get from the main road. 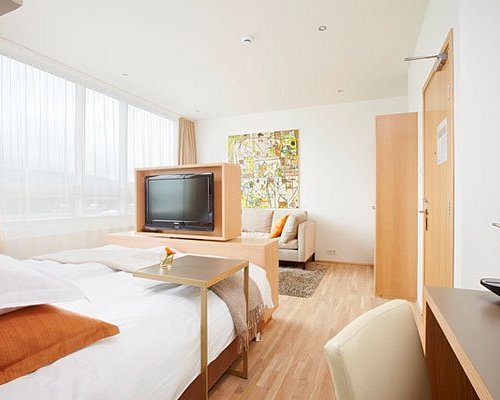 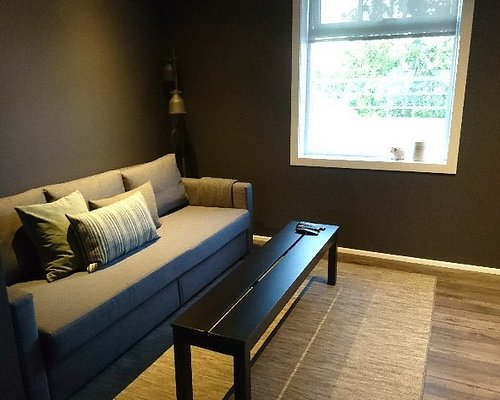 Appeared to be a nice place, request not to be in the lower level. The stairs are quite treacherous going up to the kitchen and common area. The rooms were clean but the sheets were so thin and full of holes. We had to wait for someone to come and meet us and this was in the afternoon. Nobody is on sight ever. It is central and you can walk to the downtown area, however, it gets quite loud, especially on the weekends, as there is a dorm building nearby with a lot of young people partying in it.

Room tip: Rooms facing the street may be quieter. Ask not to be put into the lower level rooms.
Ask cpm15 about Gula Villan B&B
Thank cpm15

This review is the subjective opinion of a Tripadvisor member and not of TripAdvisor LLC.
MartinW800
Hitchin, United Kingdom
260139
Reviewed September 14, 2015
Great central location; more youth hostel than guest house, but still - a great nights sleep.

This is the only guest house we stayed in on our two week tour around Iceland, and when we turned up here we were a bit unsure about it. We subsequently found out that there was a three day annual festival going on that weekend in Akureyi to celebrate ts foundation, many many years ago. So perhaps as the festival is always in the calendar, maybe transient tourists like ourselves come second in the running order that weekend.
It has a very central location, just up from the main street so great from that perspective. Having found the place quite easily we checked in, via the buzzer where you get through to a chap who then comes along and lets you in. Very quaint.
It is in effect a house that has been converted into a guest house. We had the basement and although I agree with other reviewers that the stairs down to this area are almost lethal, if you go down backwards you will be fine. Sounds daft, but try it you'd be surprised. BTW, you can take your luggage in around the side / back door so no problem.
The room was quite large with a small "second" single bedroom with kettle, tea, coffee etc. We used this area for our cases. The shower worked well and the water was hot. The radiators worked and the wifi was great throughout the house. Two armchairs allowed us to relax and catch up on things.
Breakfast was a cold buffet provided in wicker baskets for each room / guest, and there was plenty in there to get you going. If it is not enough then you are 100 metres from the main street where there are plenty of eateries, including the main bakery.
Our room had private facilities which is what we requested, so no problem there, and and I think all the others shared the various bathrooms spread across the house. There were some dormitory type rooms sleeping 6 - 8, so hence to me the place is more youth hostel than guest house, especially the provision of the cold basket breakfast and use of kitchen facilities. I agree that it sounded a bit noisy when others were using the next floor above, (main ground floor) but all you need is a set of ear plugs - these are only £10 / €15 or so and work wonders. You can use the kitchen, and the presence of a filter coffee machine came as a welcome relief in the morning, a couple of journeys down the staircase one cup at a time, and we were sorted.
Actually, we slept very well here.
The location is great, the breakfast was perfectly adequate, the room clean and the water hot. The wifi worked well with no signal drop off.
All in all, it was good.

This review is the subjective opinion of a Tripadvisor member and not of TripAdvisor LLC.
Gina M
Innsbruck, Austria
4
Reviewed August 19, 2015
Central location. Good budget guesthouse.

This guesthouse is centrally located, not that Akureyri is that big anyway. We were booked into another guesthouse but were moved to this one by the managers. It was no hassle for us but something that you should be aware might happen. Each floor has a bathroom and kitchen area. We were woken up early by a very noisy large tour group using the kitchen. The bedrooms are clean and comfortable and what you'd expect from a budget hotel.

This review is the subjective opinion of a Tripadvisor member and not of TripAdvisor LLC.
Cyclopath43
Washington
238288
Reviewed July 30, 2015
A big hassle to check in there, but a nice place to stay--once you're IN.

After a long drive of 250 miles (400 kilometers), I reached Akureyri, the second largest city in Iceland (population: 18,000) and felt pretty tired. It was quite a hassel to locate the Gula Villan Guesthouse (address: Thingvallastraeta 14; Icelandic spelling: þingvallastraeta), and when I arrived there, not a soul was around, although I rang the doorbell at least a dozen times. The front door was unlocked but, when I walked in, no one was there. There was a key in the door of every guestroom and a “Vacancy” sign showed in a front window. Kind of strange...

So I walked down a very steep street to a nearby Hotel Booking Center where a kind young woman called a telephone number that I had for the Gula Villan (meaning “Yellow Villa” in Icelandic). I walked back up the steep street to the Gula Villan at Thingvallastraeta 14 and waited there for a half-hour, when another young woman stopped by in her car and said she was waiting for me at the Hotel Booking Center, although I had told the receptionist there that I was returning to the Gula Villan on foot. Oh well...

The nice Gula Villan receptionist told me that I was not staying at that location and that I should follow her in my rental car to a second Gula Villan located at Brekkugata 8 (sometimes spelled Brekkugötu), about five minutes away. She said that I will be staying there, although my travel agent had booked me for a one-night stay at the Thingvallastraeta 14 location (or maybe a middle-person booking agent had made the error), and my accommodation voucher clearly showed that I was going to stay at the Thingvallastraeta 14 location. “The Reception and a second guesthouse is located at the Brekkugata 8 address,” she explained. “You should have come there first.” That was news to me, but I always go with the flow because life is too short as it is. As it turned out, there was no Reception at all at the Brekkugata 8 address; in reality, the receptionist herself WAS the Reception!

Finally, the receptionist showed me to my room on the second floor. The room had a comfortable single bed, a simple chair, and a large window looking out over downtown (an excellent location). It was tastily decorated and was really very nice. She also told me that I would be sharing a bathroom (only two bathrooms for 20 rooms, it turned out!), and that I could use everything in the kitchen on the first floor.

The entire guesthouse was absolutely spotless and very cheerful. Despite the normal noise of a crowd of other guests staying there, I liked the place instantly. It was kind of like an upscale hostel: cozy, clean, safe, well-located, with free and excellent Wi-Fi, and a tiny sitting room with a flatscreen TV. My only wish was to have stayed there a second night.

Breakfast was included in my room price, and it was kind of special: In the morning I looked into a large refrigerator and there I found a wicker basket wrapped in cellophane with my name and room number on a slip of paper in addition to a message that said, “Enjoy your breakfast!”). In the basket I found a small carton of milk and another of orange juice, a small banana, a square wheat roll with pumpkin seeds on top, a delicious Danish pastry, a plastic container of yogurt with a separate compartment containing small corn flakes and tiny dehydrated blueberries, two slices of ham and one slice of cheese (each food item separately wrapped in aluminum foil), and a tiny sliver of chocolate. For me, it was Christmas and Easter at the same time in a basket! It was enough food for breakfast, lunch and supper. Of course, self-served coffee and tea were available in the kitchen, which all guests can use to prepare meals.

Overall, I would stay at the Gula Villan again, despite the initial check-in hassels that I’ve described above.

This review is the subjective opinion of a Tripadvisor member and not of TripAdvisor LLC.
Leah C
Toronto, Canada
10828
Reviewed July 5, 2015
Run while you can!

Stayed here last night- was booked by travel company for one night of a 10 day self tour. The location was good and we thought we were in for a treat until evening came and the other guests started coming home from their day to make themselves food and eat in the common area. Pulling out theiir chairs, scraping on the floor -our ceiling- was torture for us, as we were trying to get to bed early (which a person should be able to do if they wish). It sounded like there were elephants upstairs. Then, in the morning,people were up at 6:30 to have their breakfast (prepared baskets of food) and roll out their luggage to leave. If the owners want to rent out such a room, it should be soundproofed. I can honestly say that this was the worst night I have ever stayed in a B&b and I have stayed in many around the world.
Also, the stairs to the lower level were much too steep. We each hit our heads on the low ceiling stating down the staircase.

Room tip: Try to get a room on second floor if you must stay here.
Ask Leah C about Gula Villan B&B
1  Thank Leah C