A really unique and welcoming place

We lived in a Aurora Cabin and it was really nice, clean and had everything you need. Wonderful to see the stars from the bed! The staff was very helpful and welcoming and breakfirst was first class.
The prices for activities is overpriced but thats to be expected in a tourist place like this. Apart from that everything was perpect!More

Thank you for the positive review and feedback. We are glad you enjoyed your stay. Best wishes and welcome to visit us again!

Report response as inappropriateThank you. We appreciate your input.
This response is the subjective opinion of the management representative and not of TripAdvisor LLC.
See all 176 reviews
Nearby Hotels 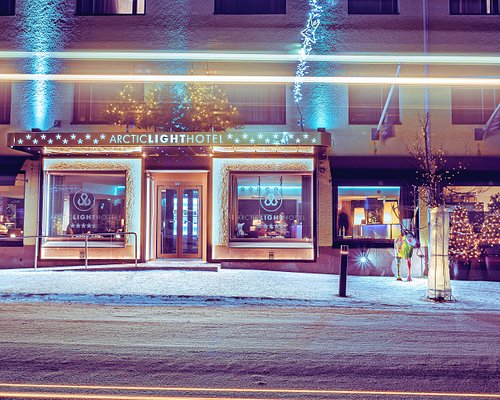 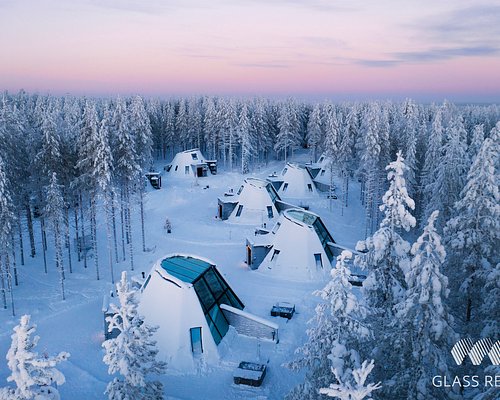 Our tour guide Saara learned Chinese on her own and is very knowledgeable. Besides excellent tastes and driving skills, Saarah drove us to chase the aurora, with berry juice and self-started fire (with 1 match). The aurora experience is truly the highlight of the trip, and it’s very unforgettable. For tourists coming from industry-heavy cities with concrete walls, I highly recommend lying on the Apukka resort lake to just stare at the sky in the winter. ❄️it’s the most life-changing experience ever.

Beyond the aurora trip, Saara helped us with directions, getting to the train stations, picking up from the airport, and helping us navigate the museums. She tried to speak Chinese whenever she can, and the trip was never boring with her curious soul :)

Thank you very much for your kind words. We are happy to hear that you had a good experience and liked our guide Saara. Best wishes and welcome back to Apukka!

Report response as inappropriateThank you. We appreciate your input.
This response is the subjective opinion of the management representative and not of TripAdvisor LLC.
118elainez
Singapore
89
Reviewed January 12, 2019
Excellent location, fantastic staff, wonderful experience!

Airport transfer was welcoming, with the driver helping us all the way from the luggage belt to the car. Staff we encountered along the way to the reception were so cordial, friendly, and nice! They made us feel at home right away. Checking-in was fast, and staff was attentive and warm, helping us with the bus schedules and enquires about activities. When we feedbacked about the glass ledge in the bathroom coming loose and the back door not being able to shut properly, the staff immediately looked into it even though it was already late evening. The repairs were done promptly during the course of our dinner. Every morning, we were greeted by the staff warmly too, and those in charge of the various outdoor activities were so bright and energetic, injecting enthusiasm in us! Very, very wonderful experience overall made by the fantastic Apukka staff! Stay here if you're looking for a home away from home!

Room tip: The cabin is very good for families. Even has dining, living room and a full kitchen.Very spacious too!
Ask 118elainez about Apukka Resort
Thank 118elainez

Thank you very much for your hear warming review. We are very happy to hear you enjoyed your stay and our team made your holiday even better. Best wishes to you and welcome back for another visit to Apukka Resort.

Report response as inappropriateThank you. We appreciate your input.
This response is the subjective opinion of the management representative and not of TripAdvisor LLC.
filadelfium
Moscow, Russia
22
Reviewed January 12, 2019 via mobile
Filadelfium

Three bedroom home vacation.
1. If you are going with kids - prepare to cook, otherwise they would be hungry. Since early morning. Because breakfest is not eatable. The same as lunch and dinner
2. Never take our number A2. The heater near the front door is out of order, and the front door itself is the same as the doors inside - so all cold winds welcomed and dance inside.
3. Stuff trying to do their best.
4. No laundry. No drying machine. If your kids got wet - it’s the end.
5. We never met place with no room service.
6. No kids playground.
7. The Kitchen. Just take everythng with you. Salt. Sugar. Oil. Milk. Coffee. Tea. Knives. And freeze. Because the fridge doesn’t have it.
8. Excurcions. We prebook all of activities to be privite except fishing. Snow. Forest. Igloo. Fire. Go home. If we came from north africa and it was our first trip out of continent - it probably would be great. But we weren’t. And we saw a lot of snow before. The only wonderfool thing is stuff. Great people doing there best in the situation of owful hotel management.
Huskies tour has the greatest guide with harisma.
9. Aurora. Every guest should be mentioned how aurora looks in Lapland and must have camera the same as Mark III.

Apukka could become a good hotel in smart hands, but right now - “to hug and cry”. Guests feel that you make money on them in economic crisis situation counting every cent.

1. Just buy a good camera for activities and sent photoes to guests.
2. If you wrote in advertising that everyone would get a certificate as huski driver - print it. Cartridge and papers with printed logo fly all over the world in seconds.
3. Kids are your future - make a little playing park for them. A bix of colored pencils with a few papers for drawing as a gift costs nothings but gonna make your name. Make kids hours - even for money - give rest to their parents - they would be grateful, every lucky parents needs rest.
4. Buy curtains for igloos. And repair heaters and boiling system in the hotel. Half of guests took cold, others are found half-boiled in their rooms.
5. Employ someone who could cook food, even breakfest.
6. Explain guests how they could call you or write messages using internet.
7. Make guest feel, that you are taking care of them instead of taking all their money.

Your feedback makes us confused. There are many clients who have given quite an opposite feedback on many of the matters you write about. We do appreciate your feedback and we do our best to develop our services to meet the expectations of the clients better.

The biggest confusion is about the lack of a playground for children. We have a big snowy yard around the cabins and the main buildings. We call it "the playground". There are toboggans, kick sledges, skis, snowshoes and slides to slide down the hill. All in free use of the clients. Clients can play in the snow, build snowmen and snow statues if the weather is making the snow to be right kind of snow for sculpting.

Our restaurant has provided breakfast buffet with mostly Finnish food. We had lunch and dinner buffet with menu changing every day. We also had a la carte menu available daily. We hope to be able to provide locally produced pure food also in the future.

Here just about few things. Our main accommodation are the Aurora cabins and the Komsio suites. Apartments and holiday homes are just a few rooms and we do our best to make them fine for families for their stay.

We wish you a nice year ahead.

Report response as inappropriateThank you. We appreciate your input.
This response is the subjective opinion of the management representative and not of TripAdvisor LLC.
swish2014
London, United Kingdom
840
Reviewed January 11, 2019
Apukka Resort was amazing!

A friend and I shared a beautiful apartment, We had a good deal from Aurora Zone, of bed and breakfast and dinner, with flights, airport transfers and three outings, namely dog sledding reindeer trek and snowmobile search for the Aurora. We were warmly greeted at the airport by resort staff who drove us back to the apartments with a lovely kitchenette, sitting room, bedroom and shower room. The food was lovely, very varied and plenty of traditional fare in a buffet setting. We were adequately suited and booted in very warm outdoor wear, and the guides couldn't have been better. It was unseasonably warm the first night, only -9! Then it got much colder down to -21. Dog sledding was really good fun, as the dogs were obviously keen to run. Very glad I had taken my ski goggles as it was very cold. The snow train was a magical experience too, and we were very glad to stop half way during both of these trips to huddle round the fire pit in a teepee and drink warm blackcurrant juice and barbeque sausages. I braved a night in an ice cabin which was freezing but something to be proud of, I think! Three disappointments - I wanted to use the jacuzzi after my night in the ice cabin as my back was really sore, but was told I would have to pay for the hour and a half rate for use of sauna, ice pool and jacuzzi of 145 euros, no exceptions. Too much for me so spent half an hour in the shower. The food on the third night was uninspiring, very bland and not very tasty. Lastly, the reindeer trek was a disaster from start to finish. Despite being fitted out by other guides in the blink of an eye, Saara struggled to get the right sizes for many of our group. By my fourth overall I was hot and bothered and said it would do as I couldn't bear the thought of struggling with yet another change! So we were over half an hour late getting to the site. Then one of the Reindeer refused to pull his sleigh, and then our reindeer;s harness broke and had running repairs, and then we had a power failure n the shed at the end of our juice break, and we still had to finish at midnight. I know tings happen when animals are involved but the clothing debacle should not have occurred. That said, we stayed out after that, and occasionally going back to the open fire to warm up, were eventually rewarded with the most brilliant display of Northern Lights at around 2am. Overall, a magical experience, lots of lovely memories of friendly people and a winter wonderland.

Thank you for your kind review.
Our apologies that your experience wasn't too great when joining the reindeer safari. We appreciate the feed back. Glad to hear that other than that your stay at Apukka was magical and memorable. Hope to welcome you back for more adventures!

Report response as inappropriateThank you. We appreciate your input.
This response is the subjective opinion of the management representative and not of TripAdvisor LLC.
secrets_of_odessa
Odessa, Ukraine
56
Reviewed January 10, 2019
Dream vacation near the north pole

Thank you for your nice review. We are happy you are happy about your stay in Apukka Resort!

It is nice you mention the authenticity. We want to cherish the traditions of the old tavern that has been here in the same spot at the end of 1800's. The light colored main building in the yard had received a wooden cover, we hope it will make the surroundings even more nice for the travelers to experience.

We hope to be able to welcome you again as a dear friend. And nature will fulfill the rest...

Report response as inappropriateThank you. We appreciate your input.
This response is the subjective opinion of the management representative and not of TripAdvisor LLC.
View more reviews
PreviousNext
1…151617…28