Right on a park, quiet. Nice and... - Hotel Tegnerlunden

Expedia.com
Hotels.com
Travelocity
View all 12 deals
Prices are the average nightly price provided by our partners and may not include all taxes and fees. Taxes and fees that are shown are estimates only. Please see our partners for more details.
PGF94131
Athens, Greece
12798

Right on a park, quiet. Nice and functional.

Rooms are on the smallish side but clean and functional.
Quiet location, right next to a nice little park and 2mns from drottninggatan street with many restaurants, shops and a nice 15-20mns walk to the center the old city.
Good internet access throughout the building.
Overall a good location.
Breakfast room on 6th floor is bright with rooftop view; overall very pleasant.
Breakfast is a lively affair with guests from the hotel and the combined
Micro-hotel (for young travelers).
Food is fresh, varied and of good quality.
Staff is pleasant.More

Show less
Room tip: Room with a view on the park.

Dear,
Thank you for taking the time to wright this review of your stay with us, it means a lot!

I'm glad you enjoyed your stay at Hotel Tegnérlunden and we're looking forward to welcome you back to us in the close future.

Report response as inappropriateThank you. We appreciate your input.
This response is the subjective opinion of the management representative and not of TripAdvisor LLC.
See all 1,036 reviews
Nearby Hotels 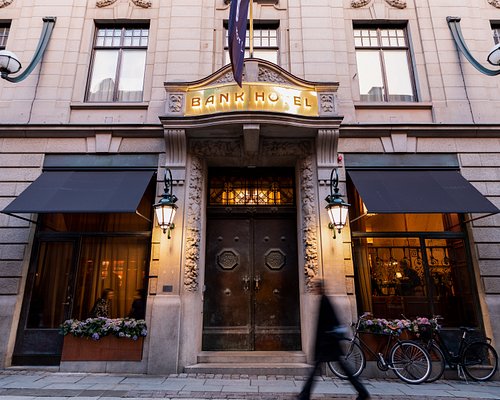 Basic hotel with ok location. Friendly staff. No A/C in the room I stayed in ... And difficult to open window = hot, hot, hot.

No ventilation or window in bathroom ! No shelves to place your stuff on in bathroom & bathroom was generally speaking very poorly 'designet'.

Very basic breakfast ... However on 6th floor with ok view.

Will not stay here next time I'm in town.

Hello,
Thank you for your feedback. I´m happy to read that liked our staff but a bit sad to hear that you didn´t like the rest. Our breakfast is a Continental breakfast and we always try to listen to our guests what they like and what we should have in the breakfast. If you have any ideas how we can improve you are more than welcome to call or mail us!

Sad to hear that the room was very hot and that the window was difficult to open. If you do descide to come back to our hotel you can always ask for help in the reception and we do also have fans to borrow.

Take care and wish you a nice sunday!

Report response as inappropriateThank you. We appreciate your input.
This response is the subjective opinion of the management representative and not of TripAdvisor LLC.
Synthia_Jb
Bucharest, Romania
130106
Reviewed September 5, 2016
Ideal for a city break

- Location: The hotel has a great location (10-15 minutes walk from the Central Station) and it is very easy to find.
- Staff: I was impressed by the staff friendliness, very kind and helpful.
- Room: The room is quite small but nicely decorated and clean. There was no heating inside, but the temperature was fine in the room.
- Breakfast: One of the nicest things about this hotel is the breakfast room - it has large windows and a wonderful view (it is located on the highest floor of the building). They offer enough options, including some for vegetarians.

Dear Synthia,
Thank you very much for writing your review.

I'm glad you liked your stay with us and we hope to have you as one of our guests soon again!

Report response as inappropriateThank you. We appreciate your input.
This response is the subjective opinion of the management representative and not of TripAdvisor LLC.
MarioRimati
Rome, Italy
76
Reviewed August 29, 2016
We stayed for 6 days. A great hotel located right in front of a small park in Stockholm.

A very, very good continental breakfast too. The hotel is near the metro stops and shops. It's also not too far away from the central train-metro station. Walking time to the main attractions in the city center, about 20 minutes more or less. The hotel is also near the cemetery where Sweden's former Prime Minister, Olof Palme, is buried (he was assassinated nearby in 1986). We had room 402, very quiet with only one tiny drawback, a small sink in the washroom, other than that, a fine hotel in central Stockholm!

Dear Mario,
Thank you for your feedback.
I'm happy to read that you enjoyed your visit in Stockholm and at Hotel Tegnérlunden and we hope to have the pleasure to welcome you here again soon!

Report response as inappropriateThank you. We appreciate your input.
This response is the subjective opinion of the management representative and not of TripAdvisor LLC.
TravelAndSail
Sunset Point, Florida
3613
Reviewed August 29, 2016 via mobile
Very good ljcation

The location of the hotel is very good, just a few minutes walk from the central station, so even with luggage it can be managed by foot (even that it's mostly uphill :) ).
Old Town is also easily accessible by a longer walk.
The rooms are not large, but they are comfortable -- Scandinavian style. Breakfast buffet is also good, with view on Stockholm rooftops.

Dear Peter,
Thank you for your review,
i'm glad to see that you enjoyed your stay with us and we hope to see you here again soon!

Report response as inappropriateThank you. We appreciate your input.
This response is the subjective opinion of the management representative and not of TripAdvisor LLC.
Ella R
San Francisco, California
922
Reviewed August 28, 2016
Staying in hotel

Hello everyone. Just came from our vacation from Scandinavian. My husband and I were staying in this hotel in Sweden for 4 nights. It was a little longer way from train station to hotel especially if you carrying a luggage. But very nice area around hotel. A lot of restaurants, shopping, park. Very clean hotel, nice customer service, very good breakfast. Room small, no air conditioner. If you baggage on the floor no space for moving. Wi FI stops every few minutes. But bathroom it's very different story. If you need to wash your hand you will be all wet, because sink so tiny that you can not imagine. If you need to take a shower sometimes it's only cold water. And you staying In the bathroom and waiting for warm water. One day it wasn't soap in the shower and when I asked for soap receptionist told me that I have to buy from them. What is it? So we were not happy with this hotel.

Thank you for taking the time to provide us with your feedback. We welcome and pay close attention to all feedback, as it helps us improve our standard and service in line with the expectations of our guests.

I am sorry to read that you didn´t enjoy your stay with us as much as we aim for and I apologize for this. We always do our best to provide our guests with a high level of service and a great product.
Regarding our Wi-Fi we are continuously installing extra access points to improve the signal. Unfortunately the signal can be disturbed by other Wi-Fi networks and electronic devices with the same signal in our area. We know how important a good internet connection is and I apologize for the inconvenience this caused you during your stay with us. I have of course forwarded this to my colleague and we will test the signal.

I apologize that you didn't have any warm water in the shower and will check on if there was any trouble regarding this. Of course you should have got soap to the shower without paying for it. I will controll this issue with my collueges!

I hope we will have the pleasure of welcoming you back to us in the near future and please contact me direct so I can make sure that your next stay with us will be as pleasant as possible.

We look forward to welcoming you back to Hotel Tegnérlunden

Report response as inappropriateThank you. We appreciate your input.
This response is the subjective opinion of the management representative and not of TripAdvisor LLC.
View more reviews
PreviousNext
1…242526…