$226
$115
View deal
Free cancellation until 12/18/21
Expedia.com$163
Hotels.com$163
FindHotel$163
View all 17 deals
Prices are the average nightly price provided by our partners and may not include all taxes and fees. Taxes and fees that are shown are estimates only. Please see our partners for more details.
Vaughan Anthony R
Melbourne, Australia
5954

I was there for work and the room was fine to sleep in but very very small. Although surface cleaned, the bathroom had mould and in general the room should have been cleaner. I was warned the location was noisy and they weren't wrong. I usually can sleep through anything, but it was extremely noisy, even midweek. The service provided by the staff was great and very welcoming. Location was superb, but given the price and all, if I was to go back, I would stay elsewhere.More

Dear VaughanO17,
Thank you so much for your feedback. We appreciate that you took out the time to tell others about your stay.
One of our most important missions is to make sure that our guest will get a good night sleep and enjoy the time spent in our rooms. We have rooms facing the road and rooms facing our yard. The rooms facing the street will give a good view of the city of Copenhagen, while our rooms facing the yard will give a quieter atmosphere. It is rare that we have complaints regarding noise from the street and taken our excellent location into consideration, we are happy to offer a comfortable stay for our guests. We are sorry to hear that you were bothered by noise during your stay. Thank you again for your feedback.
Best regards,
Marlene Frez

Report response as inappropriateThank you. We appreciate your input.
This response is the subjective opinion of the management representative and not of TripAdvisor LLC.
See all 1,433 reviews
Nearby Hotels 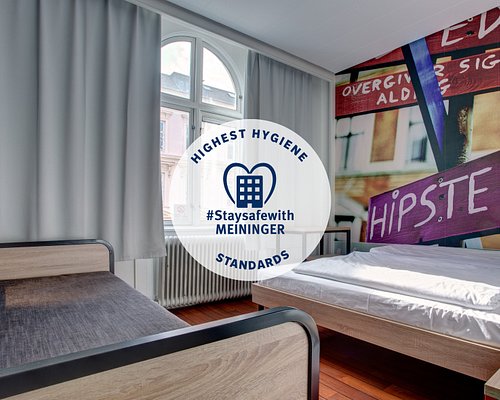 Dear kkadvisor68,
Thank you for your feedback. I am sorry to hear that your stay didn't live up to your expectations but I am happy that you took out the time to share your thoughts with us. We always strive to become better and with your feedback, we have a good chance do so.
Thank you once again.
Best regards,
Marlene Frez.

Report response as inappropriateThank you. We appreciate your input.
This response is the subjective opinion of the management representative and not of TripAdvisor LLC.
krysztovs
2012
Reviewed September 3, 2017 via mobile
Ok, but too expensive

Room, service and breakfast were all Ok, but nothing special. In the backyard, there is some device running all night, which causes some discomfort if your room has its window there. For about 200€ per night a single, one should be able to expect somewhat more (although I would expect that this applies to most places in Copenhagen).

Dear Krysztov,
Thank you so much for your feedback. We appreciate that you took out the time to tell others about your stay.
Copenhagen is an expensive city – and we do understand that some of our foreign guests do get a bit of a surprise when coming to Copenhagen. We do try to make sure that our guests get some good deals on our rooms and we always recommend them to visit our website to get the best rate as possible.
Best regards,
Marlene Frez.

Report response as inappropriateThank you. We appreciate your input.
This response is the subjective opinion of the management representative and not of TripAdvisor LLC.
sebastienp22
Brooklyn, New York
1
Reviewed September 1, 2017
Happiest Hotel in the world.

The receptionist were very professional, engaging, and friendly. One receptionist went out of her way to interact with me while it was slow in the lobby to assert that I was enjoying my stay in Denmark. All the staff I admit take pride in their careers next year when I visit Denmark Scandic Weber's hotel will once again be where I stay done deal!

Review collected in partnership with ScandicHotels.com
This business uses tools provided by Tripadvisor (or one of its official Review Collection Partners) to encourage and collect guest reviews, including this one.
Ask sebastienp22 about Scandic Webers
Thank sebastienp22

Dear Sebastlenp22,
Thank you so much for your very kind review and for sharing it with us and others. I am so happy to hear that you enjoyed your stay and that you were happy with our service and our approach to our guests. We very much look forward to welcoming you back!
Best regards,
Marlene Frez.

Report response as inappropriateThank you. We appreciate your input.
This response is the subjective opinion of the management representative and not of TripAdvisor LLC.
Vahis
Espoo, Finland
366160
Reviewed August 30, 2017 via mobile
The worst bed ever

I was going to give just 1 stars due to the worst bed I have ever had in hotel. Also pillow was poor one but that's to common in hotels. Room was small one and quite old fashioned. It was beside the elevator. Lampshade, likely light one, just dropped to my head...
The reason why I give 2 stars is the location of the hotel. It's just few minutes walk away from the central station. Also breakfast was good.
Anyhow I have thought that Scandic is good Nordic brand but after that hotel the value of Scandic dropped really much.

Dear Vahls,
Thank you for sharing your thoughts and feedback in regards to your stay. We appreciate all your comments. Many of our guests have been very happy with our beds and our rooms and I am sorry to hear that your room didn't live up to your expectations. I hope you had a talk to our staff in regards to finding another room for you. We will love to help, if our guests contacts us during the stay.
Thank you once again.
Best regards,
Marlene Frez.

Report response as inappropriateThank you. We appreciate your input.
This response is the subjective opinion of the management representative and not of TripAdvisor LLC.
671LisaB
Lugano, Switzerland
8159
Reviewed August 28, 2017
Good room with a terrible bathroom

This was my second stay at this hotel, mainly because of its location with a convenient distance to the venue where we were attending a celebration. I had asked for a renovated upgraded room (because of bad experience last year of a non-renovated room) on the 5th floor but we were proposed a non-renovated one on that same floor. Eventually they found us a renovated room on the first floor which we accepted. The room was spacy, well furnished in beautiful colours, the only thing we could have wanted there was a proper wardrobe for our clothes for two days. The bathroom instead was a true disappointment. Narrow space with the shower on the furthest wall, no shower cabin but a half door, that is covering only half of the space when taking a shower. No bath mats so all eccess water was on the floor causing not only ugly marks on the tiling but also too much humidity. The ventilator in the ceiling didn't work, it was covered with dust so I suppose it hasn't worked for a good while. We had to use towels on the floor to make it with taking a shower,which meant that all towels had to be left on the floor for washing instead of using the same ones two days like we usually do. Not very economic, nor ecological, I'm afraid.
The breakfast was good with a wide range of different things to choose between, also for those suffering from allergies or intollerances.

Dear Lisa B,
Thank you so much for your feedback and for returning to our hotel. We appreciate that you took out the time to tell others about your stay.
We do understand that it our smaller bathrooms might get wet floors, when taking a shower. Our house is an historic Copenhagen building, where we have tried to keep the charm from the past – including the original room shapes and sizes. The bathrooms might be of the smaller size, but it contains all the amenities that is expected of our standard. Thank you for letting us know about your experience.
Best regards,
Marlene Frez.

Report response as inappropriateThank you. We appreciate your input.
This response is the subjective opinion of the management representative and not of TripAdvisor LLC.
View more reviews
PreviousNext
1…353637…